The world is changing before our very eyes. Digital technologies are rapidly transforming the way we live and work, not only via the systems and devices we use, but in the very spaces we inhabit, from the boardroom to the lecture hall, in retail stores and at worship and entertainment venues. To meet the needs of our digital tech-driven world, the consultants, architects and designers who create these spaces must adapt – or risk being left behind.

Across industries, Panasonic immersive technologies are helping educational institutions, and businesses engage, enlighten and inspire. Think audio and video working in tandem, integrated with AI and IoT to offer more dynamic experiences. Often, that experience starts with a physical environment. Imagine an office building facilitating ideation, a classroom catering to different learning styles, or a museum where the art follows patrons from exhibit to exhibit.

When should today’s consultants, architects, and designers start thinking about tech? Before they draw up the blueprints.

Technology as an integral part of design

Traditionally, technology is the last thing added to a project and the first thing value-engineered out of it. But as building designers and engineers embrace our tech-dependent culture, the paradigm is shifting, with wonderful impact and great success for those who choose to embrace it. In the same way materials, shape and function are critical to a building’s design, technology is also crucial. Designers and architects are known for their ability to create collaboration across diverse disciplines. Technology should be one of those disciplines that’s foundational to a project.

Technology use in the workplace or at school often starts with consumer electronics in the home. For instance, a stakeholder likes a certain device in their house and realizes it would be beneficial in the workplace. They bring the device to work, and suddenly, it’s a critical part of how she does, or would like to do, her job.

The design community is paying particular attention to the teens and young adults of Generation Z, who have moved from their parents’ homes into universities and workplaces, and brought with them an expectation for cutting-edge tech in learning, work and play. They’re calling for classrooms with flexibility and mobile seating to support team-centered activities and inquiry-based learning. They’re also looking for spaces with tech tools that make sharing information easy such as laser projection technology with stellar image quality, compelling, informative digital signage, flexible camera equipment and easy-to-move enhanced audio.

These calls for cutting-edge tech on educational and corporate campuses often infuse discussions in pre-design phases when architects and designers seek ideas from stakeholders. In this paradigm, tech is included and developed very early in the process, engaged and matured through the process, then implemented at construction and delivery.

Thank you for your submission.

When technology is as an afterthought, one risks losing out on the opportunity to elevate the experience. Today’s innovation often becomes tomorrow’s noise. Take digital signage. Everyone welcomed the technology when it emerged, but it can be disruptive when poorly planned. Imagine entering a bar and there are 37 panels hanging on the wall. You’re trying to have a conversation, but you’re bombarded with images, sound and distractions. Where is the design in that, or the efficiency of communication? It’s noise.

Structures designed with experience in mind and technology as an enabler create a positive emotional bond between the user and the physical space. That’s the goal of technology that creates immersive experiences. It can strengthen brand loyalty and turn locations into destinations, and powerful experiential spaces. Examples abound. In one of Montreal’s newest and tallest towers, Victoria Sur Le Parc, a striking, curved video installation is the focal point in the building’s lobby in its prominent sales pavilion. The system is made up of 27 separate 55” narrow-bezel displays. To ensure the multiple screens flawlessly perform as one, building managers run Panasonic Video Wall Manager via the Panasonic Auto Camera Calibration Adjustment Upgrade kit and implemented a Digital Camera with Wide Zoom Lens to calibrate. The dynamic technology had a dazzling influence on sales: Some 70% of Victoria sur le Parc’s condominium units were sold within weeks of the building’s opening. What’s more, the project won a Grands Prix du Design 2019 excellence in retail design award.

In a completely different setting, an equally striking video wall in New Jersey helps to bring college students together. On the campus of NJIT in Newark, NJ, architects faced a challenge common among those who design spaces on historic campuses: how to bridge old and new. Designers created a major addition to the school’s York Science Center to house faculty and student researchers engaged in transdisciplinary team-based research. The architects seamlessly merged the addition with the existing structure by physically connecting the two buildings and creating a central entrance between them.

The new double story Science Commons opens up the revitalized building to the campus allowing the activities of the researchers, students and visitors to engage with the campus street-life, according to building architects NK Architects.

Visual technology plays a central role in the bridge between old and new.

Deployed in the Science Commons, a 4x4 indoor/outdoor video wall using sixteen 55-inch Panasonic Professional Displays, serves as an information system as well as a powerful teaching tool used by professors and other members of the university to display instructional videos, diagrams and collaborative works in progress. “Everybody loves it,” observes NJIT’s Assistant Director of Digital Media Jesse House.

Time zones away, in Russia, another example of technology at center stage is drawing people of all ages. As part of a huge renovation, designers were asked to reimagine the toy store experience at Moscow’s Central Toy Store. They created a permanent projection mapping installation in the building’s atrium that provides a magical feast of sights and sounds for anyone who walks through the doors. The experience of being in this immersive environment is as playful as the products sold, attracting shoppers young and old in droves, according to a recent article.

Meanwhile, in Japan, designers reimagined the museum experience. At the digital museum in Tokyo, hard-to-read wall placards are replaced by an experience that immerses visitors in a borderless world where artworks move by themselves, communicate with each other and flow through the structure, interacting with patrons. TeamLab Borderless, a Tokyo collective of artists, designers and technologists, seamlessly integrates digital art projections and audio into strategically designed spaces to create a transfixing environment. Some visitors report becoming so emotionally invested in the experience that they lose track of time.

Both the Tokyo museum and Moscow toy store rely on innovations in projections, which are also being used with incredible success on corporate and educational campuses. To learn more about innovation in projection, check out Panasonic’s latest Guide to Projection Mapping.

It’s been said that each new situation requires a new architecture and perhaps no more so than in LA. Since the earliest days of Hollywood, architecture, film and technology have enjoyed a unique relationship. From Ancient Roman coliseums to the spaceships of science fiction, architecture has starred in cinema’s classics and current productions. Observes Architectural Design: “Throwback English Tudor or Spanish Colonial dwellings, still found in Hollywood’s streets, can look as though they belong on a studio back lot, while film sets built nearby appear hyperreal when seen on the big screen. Directors have become engrossed in architecture (witness Hitchcock’s Vertigo or Rear Window), whereas architects such as Joseph Konsinksi have morphed into directors.”

Technology is a constant, foundational and often completely invisible Hollywood presence. There are countless examples of producers making decisions about sophisticated mechanical and digital stage sets, and advanced camera equipment, long before audiences are wowed by a blockbuster movie. The same idea holds true in theme parks. Imagine visitors to a Disney attraction who become immersed in the experience without a thought to its digital or mechanical construction, which happened long before the attraction opened.

Many of the creators behind these immersive experiences are obsessed by technology, piloting new developments and using what works.

In recent research conducted by Panasonic of some 400 tech decision makers across more than a dozen industries including building & construction, and media and entertainment, there was near consensus that adopting disruptive technology has become the price of doing, and staying, in business. The majority of respondents in the building & construction and media and entertainment industries have already adopted mobile devices, apps and commerce, the cloud and IoT. 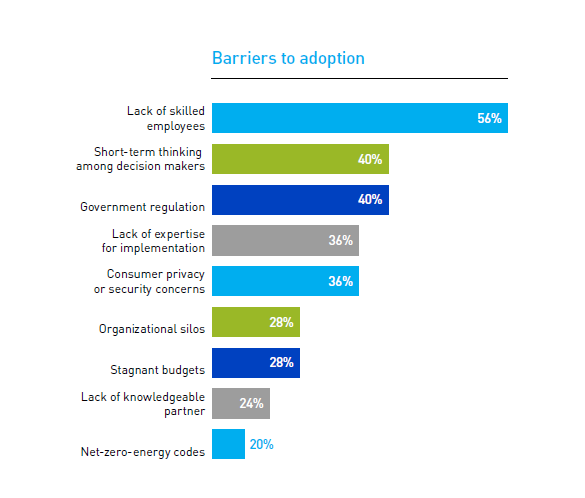 Survey respondents pointed out the risks faced by those companies who do not continue to adopt or invest in disruptive technologies. Many were concerned their competitors would pull ahead. Several barriers to broader disruptive technology adoption were cited, including a lack of foresight by decision makers and a lack of internal expertise for effective implementation.

The upshot? Those who plan early for emerging tech – and partner with the technologists who can deliver it – will be at the forefront of what’s next.

To learn about how consultants, architects & designers are grappling with the influence of emerging technology on what’s needed now in the workplace, check out Panasonic’s latest white paper: New tech trends change the game in corporate workplace design.

Software Defined IVI – The Best Second Space on the Road

A young generation of eco-citizens

Deepening our commitment to Sustainability

Leading with our GREEN IMPACT initiative, Panasonic is intensifying our efforts to combat the effects of climate change
Learn more
Innovations

Ventilation and your home – A fresh guide to indoor air quality

Why is indoor air quality important?

The quality of the air we breathe is as important for healthy minds and bodies as clean water and nutritious food. Breathing well is living well.

One giant leap: A million girls get a “moonshot” at STEM

One giant leap: A million girls get a “moonshot” at STEM
Learn more
Social Impact

What my Asian and Pacific Islander heritage means to me

Moving towards a greener future starts with passion

For nine consecutive years, Panasonic has been recognized as a leader in sustainability. We’ve been a pioneer in many sustainable technologies, from solar panels and electric vehicle batteries to data center battery-backup and indoor air quality solutions. This Earth Day, learn more about what inspires some of our green tech leaders.
Learn more
Connected World

Discover how connectivity solutions - such as Panasonic’s OneConnect® - are making the two-wheel experience safer and more enjoyable.