From Rawson Marshall Thurber, the writer/director of Central Intelligence and We're the Millers,comes the YouTube Red comedy series, Ryan Hansen Solves Crimes on Television*. In the genre-bending show, the LAPD creates a task force that partners actors with detectives. The series stars Ryan Hansen (Veronica Mars, Party Down) and Samira Wiley (The Handmaid's Tale, Orange Is the New Black), who plays Hansen's partner Detective Jessica Mathers.

"Yes, that's the actual title," says Papert, when asked about the asterisk in the show's official title. "They always have something funny at the bottom of your computer, or your phone. It really sums up the show. It's a comedy that's very self-aware, essentially a show within a show."

One of the unique aspects of the show is that Hansen will often break the fourth wall and suddenly speak with the show's writers, or to prompt something in the edit. "Whatever the style of the moment is what we go with visually," explains Papert. "For example, there's a clip of Ryan that's an audition tape and it's supposed to be the camcorder that films his auditions. Those scenes were shot on the RED production camera in the pilot, but I felt it would be more effective if we used an older small format camcorder. We used a 10-year-old HDV camcorder for those shots.

"Also, when they're solving the crime," continues Papert, "the style changes to a procedural crime drama. When they're doing chase scenes, it will go into the 2:39:1 aspect ratio to look like an action movie. There are also elements that are shot on iPhones framed in a vertical pillar box. When Ryan goes home to his family at night, it becomes a three-camera sitcom shot in 4:3 mode. It has a lot of fun with conventions in the daily life of a TV show. 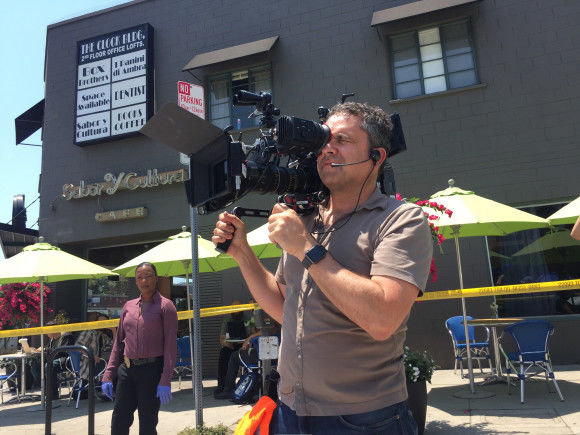 With the pilot already shot on RED cameras and a visual style established by DP Jordan Valenti, Papert came in and expanded the number of cameras to create different and unique looks. According to the DP, 80 to 90 percent of the show was shot with VariCam LTs. He recorded 10-bit 4:2:2 AVC Intra files in UHD (3840 x 2160) with two LTs that were rolling for the majority of scenes. Shooting in V-LOG, Papert and his DIT, Freddy Fernandez, created a set of viewing LUTs that looked a little cooler and desaturated. The VariCam LT builds, rented out of The Camera Division, were essentially long and low to keep the cameras balanced for handheld shooting. Papert's primary lens was a Fujinon 19-90mm Cabrio zoom, as well as ARRI Alura Lightweight zooms.

"In an ultra-fast paced TV schedule, I find it very difficult not to have the flexibility of zooms," explains Papert. "We would sometimes zoom within a shot, as well as reframe a shot for the director at given moments to get a tighter piece of coverage for certain lines." Although he doesn't normally shoot wide open, Papert reveals that he usually shot at T2.9 and a third. "The funny thing is in recent years, you typically wanted to stay away from the ends of the lens to get maximum clarity," he reveals. "But with modern lenses so sharp, I think it's actually a benefit to get them perform a little worse to match what many others are doing with vintage lenses. With the LT, or any of the VariCams, if I need an extra stop, I can always tune that in with the ISOs."

For exteriors and well-lit interiors, Papert shot at native 800 ISO. Since the show didn't have a lot of night exteriors, Papert only went with high ISOs a few times during the run of the series. "There was a night interior that looked out a window at the city streets so I took it to 3200, 4000 (dialed down from 5,000) to get the downtown streets to pop," says Papert. "Then we knocked down all of the levels in the interior to accommodate that."

Papert mainly used high ISOs to capture 45-degree shutter angles for sequences that needed an action-style look. "That effect comes with a two-stop cost," explains Papert. "For interiors, that was very helpful because I could shoot the meat of the work with the set lit based on 800 ISO and when I needed to switch to the 45-degree angle, all I had to do was go to the 5,000 mode, dial down to 3200, and we were right there."

For lighting, Papert had his usual package that mainly consist of smaller LED panels and LiteGear LiteMats for close-ups and interior work. He also made good use of traditional lighting sources such as HMIs, an ARRI SkyPanel, Kino Flo Celebs, Source Fours, and Lekos. "There was a wide variety of looks we went with, which was part of the fun," he explains. "When it went into the chase scenes, or some of the environments that were intended to be heightened, we got to play around with the visuals. The rest of it was fairly natural, inspired by procedural style lighting."

Perhaps the most challenging scene was an ambitious Steadicam sequence that was shot at LA's Canter's Deli, which was an homage to Martin Scorsese's Goodfellas (shot by Michael Ballhaus). "It starts in the front section by the bakery counter, which is by the window with full daylight filling in," explains Papert.

"As we walk through the space, the exposure and color temperature levels changes completely and we had to light their paths from the takeout section through two dining rooms, the Kibitz room, which is a lounge area, through a corridor, and then back into the kitchen. I only had a couple of hours to pre-rig, which was a big challenge to soften the transitions from the brighter areas and dark areas from one color temperature to another. One of the more challenging aspects of the day was how to get an image transmitted back to the monitors from the beginning to the end, let alone the lighting. The shot turned out well and it was a lot of fun to do. With my Steadicam background, the idea of doing an homage to one of the best Steadicam shots of all time was pretty exciting."

Post production for Ryan Hansen Solves Crimes on Television* was done at Chainsaw (a division of Sim) and was graded by senior colorist Kris Santa Cruz. "The color process was an interesting one because the pilot had gone in one direction and we went back and revised that a bit," explains Papert. "It really spoke more directly to the procedural look than what we ended up with the show. It was a little cooler and more desaturated than what we ultimately decided was more a pleasing balance between a comedy and procedural look.

"The joy of shooting RAW or LOG is it gives you more possibilities" continues Papert. "With a show like this, to be able to mold the different looks was super helpful and when using another camera, I always have to think about accommodating different exposure ranges. I don't have to worry about that with VariCam, which has me covered with dual native ISOs. It's a magic trick that I think is real special."

Learn more about the VariCam LT.