Jacksepticeye, aka Seán McLoughlin, puts his artistic stamp on life during lockdown to inspire his 27+ million YouTube followers

After dropping out of college, Seán McLoughlin found himself living in a log cabin in the woods. Feeling lonely and depressed, he turned to YouTube and began exploring video game content in hopes he would meet like-minded gamers. In 2012, he decided to start his own channel and began uploading gameplay videos. Over a five period, he uploaded two videos every single day, never missing a beat.

McLoughlin, better known as jacksepticeye (a nickname he received after a football eye injury), has gone on to become one of YouTube’s most successful gaming personalities with over 14 billion views and 27+ million subscribers. At first, he had no aspirations for his YouTube channel becoming a business. “It was just a fun way to learn how to edit and get out of my comfort zone,” said McLoughlin, from his home in Brighton, England. “I always felt weird about my own voice and accent and YouTube helped get me out of my shell and gain the confidence to talk more.”

Like many people, the pandemic hit McLoughlin hard. He decided to take creative breaks to obtain a “better head space” and to appreciate things outside of his YouTube world. Recently, he uploaded a video, 15 MONTHS, that is quite different from the content on his channel, both in storytelling and style. The short film covers McLoughlin’s experience and feelings over the last year and a half of the pandemic. Through imagery, he illustrates the claustrophobic isolation of being in lockdown, as well as health issues he was experiencing due to his asthma. He was inspired in large part by filmmaker Bo Burnham’s Netflix special, Bo Burnham: Inside, which had a similar theme.

“I sat there wondering how somebody could just sit inside for a whole year, record this thing and put so much of himself into it, as well as the artistry and where his head was at,” revealed McLoughlin on Burnham. “I was trying to put an artistic stamp on the last 15 months to try and gain some sort of control and closure. You can basically say this was video therapy.” 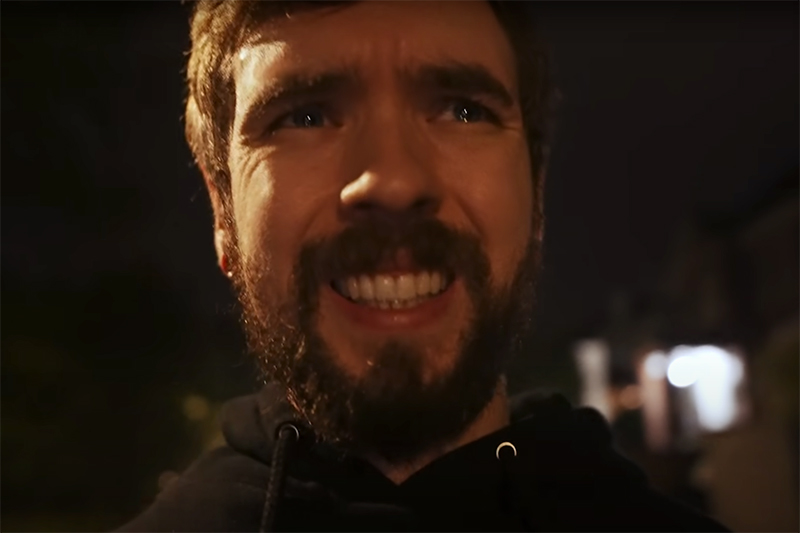 Since he was no longer tied to his desk and computer, filmmaker Seán McLoughlin wanted to try out different shots such as using a Snorricam - a body mount rig with the camera pointed towards the operator

Prior to shooting, 15 MONTHS was mostly planned in McLoughlin’s head with shots he wanted to try but never had the opportunity. Because he was no longer tied to his desk and computer screen, one device he wanted to try out was a Snorricam, which is a body mount rig with the camera pointed towards the person wearing it, giving a disoriented view. “I didn't know that's what it was called,” revealed McLoughlin on the mount, “but I've always wanted to do one of those shots. I felt like this was the perfect tool to capture a dreamy yet tight chested sort of intimacy."

Instead of working from a traditional script, McLoughlin worked off a shot list and crossed shots off after he shot them. “I’ve never done anything like that before,” he revealed. “I usually just sit down and improv everything. You turn on the camera, play a game, or react to something and go. I had to make a big creative change to make this.”

McLoughlin is a huge cinema fan, especially films told with engaging imagery and less dialogue. Art films were a big influence on the look of 15 MONTHS, but also video games such as Blood Born and Dark Souls, which focus more on world building than seeing everything up front. “I've always wanted to explore bigger and more expensive cameras, but I never really had an excuse to do so,” revealed McLoughlin. “I’m not going to sit here and do YouTube videos with an ALEXA Mini.”

McLoughlin shot 15 MONTHS with a LUMIX S1H over the course of three weeks. McLoughlin was aware of the S1H due to it being the first Netflix approved mirrorless camera. He was also aware of the fact that the S1H was the camera that Bo Burnham used to shoot his Netflix special. “The show looked so professional and incredible on the big 4K screen I was watching it on,” revealed McLoughlin. “I couldn't believe the quality of it, so I decided to jump the gun and get it for myself. For me, the price of the S1H versus what it can actually do was nuts.” 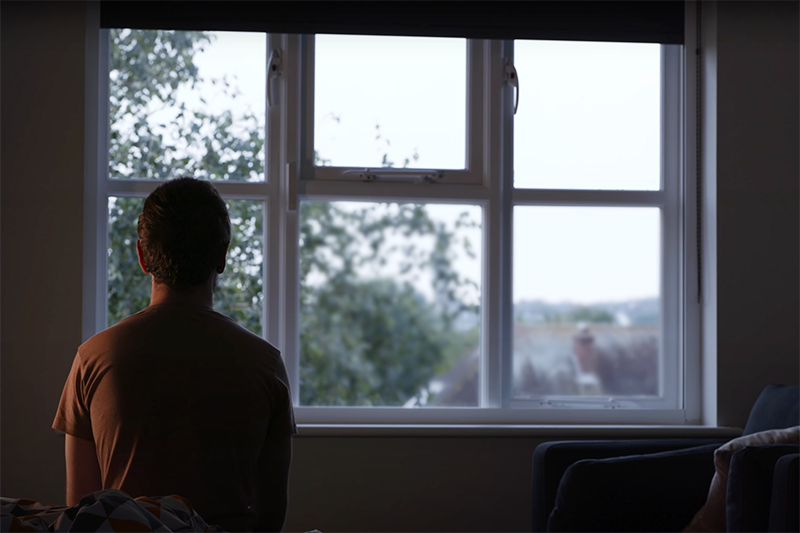 For the film, McLoughlin captured C4K (4096x2160) 10-bit, 422 files at 25-fps. He appreciated the S1H’s Dual Native ISO and that he could crank his ISO up without getting too much noise. He also shot in V-Log, which was the first time he recorded in Log. At first, he monitored his footage in straight V-Log to get a sense on what the footage looked like and then began monitoring to a Rec.709 LUT.

For lighting, McLoughlin mainly stuck to practicals, or available light, because he wanted to make sure the viewers felt as if they were living the same 15 months. McLoughlin also made use of the S1H’s Dual Native ISO function by typically going to the High mode (4000 ISO) when shooting at night, or indoors, and the Low mode (640 ISO) for day exteriors.

McLoughlin used prime lenses for the shoot, including a Sigma 35mm f/1.2 DG DN Art lens, LUMIX S 50mm f1/8 lens and a LUMIX S 85mm f/1.8 lens. He mainly shot with the 85mm to capture a more boxed-in claustrophobic feel. Shooting indoors, he shot wide open as often as possible. “I wanted to show that I'm inside and everything else outside is kind of blurry because it's right there, but we're not allowed to go out and touch it,” he explained.

Out Of His Comfort Zone

15 MONTHS was edited and graded in Adobe Premiere. Although he usually works with an editor, because the film was a personal story, he wanted to edit it himself. “It was kind of daunting at first, because whenever I do my usual YouTube stuff, it's all just start to finish – one file, or a voice file, and a face file, and then a game file,” he said. “I pieced it together over multiple days and then I went over it a few times before making changes to the pacing, such as the clock ticking in the background. 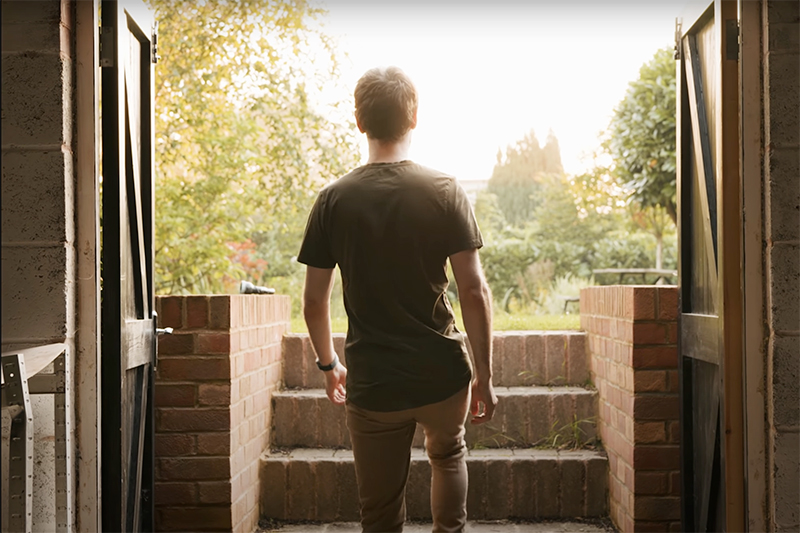 McLoughlin emerges from his home after 15 months of lockdown.

“I've worked with cameras in the past where you can shoot 4K but good luck editing that without using any proxies,” he continued. “The S1H’s codec was just amazing, I could fit so much into such a little space. And then editing-wise, that helped a lot.”

For the color grade, McLoughlin pushed the blues a little more in the beginning to give it a harsher quality to give the audience a feeling that things were a bit colder. As the film progressed, he warmed it up building into “heaven-like scenery” when he finally emerges outside. “I didn't want anything to flow too nicely, because we’ve had such a hectic year,” explained McLoughlin. “I wanted things to be a little discombobulated and a little jumbled.” To illustrate this, he used hard cuts for many of his transitions.

Overall, McLoughlin is pleased with the look of 15 MONTHS. Since the film was very personal and different from the content on his channel, he was nervous about the reaction of his followers. “A lot of people came out immediately and said I encapsulated exactly what they were feeling over the past year in a video format,” explained McLoughlin.”

Can we expect more of this personal content from McLouglin in the near future? “I've kind of dabbled in this stuff for a while, but I definitely would love to try out more of it,” revealed McLoughlin. “I have a bunch of ideas for things that I want to do going forward. For me, I was just kind of tired of sitting at my desk all the time and doing the same thing day after day, over and over. This is a great opportunity to get away and test these other creative sides of me that I was always intimidated to try out. I think it's healthy to step away and test out other stuff. I'm obviously in a lucky position where I can step away, and my audience will still be there to root for me whenever I come back. Who knows what I'll do next?" 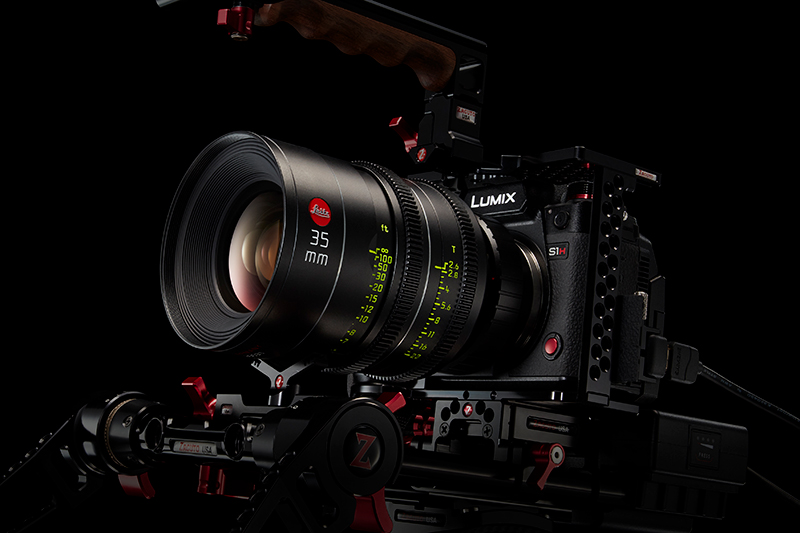 Learn More About the S1H Become a LUMIX Integrator