Culinary and travel shows have both been a television staple for decades. From the instructional (e.g., The French Chef, Good Eats) to competition (Top Chef, Chopped) to travel (Parts Unknown, Diners, Drive-Ins, and Dives), these shows provide both education and entertainment to foodies and travelers worldwide. Christopher Kimball’s Milk Street takes a wide approach to reach its audience. Located in downtown Boston, it houses a magazine, cooking school, as well as a location for their radio and television show.

Now in its fifth season and presented by American Public Television and WGBH nationwide, Christopher Kimball’s Milk Street combines both travel and cooking instruction as Kimball spotlights cooking techniques and ingredients from chefs and home cooks around the world to transform everyday home cooking. The show is produced by Milk Street and directed, photographed, and edited by DGA Productions, who provides full crew, equipment, and post-production for the series. The show is shot with a multitude of cameras, including the LUMIX S1, S1H, GH5, and BGH1. 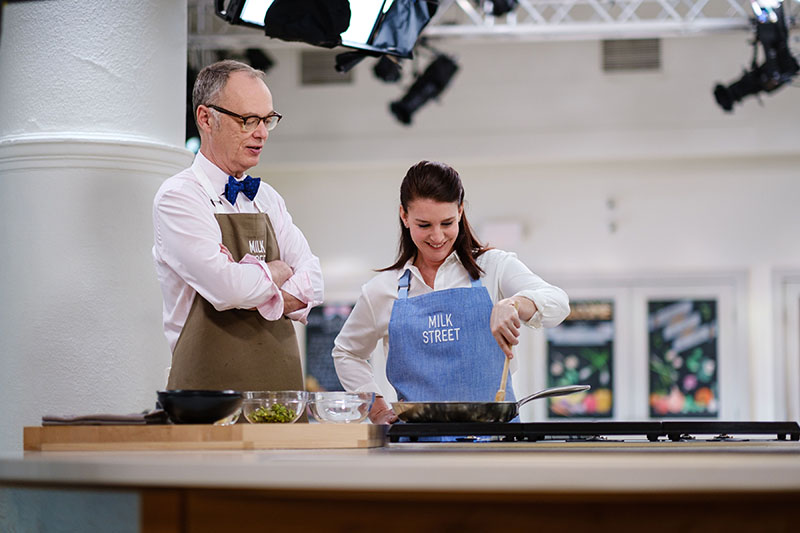 DGA Productions does it all – producing, writing, shooting, and editing – for corporate and commercial projects. Also based in Boston, some of their clients include ESPN, Fox Sports, IBM, Major League Baseball, the NFL, NASA, HBO, Hasbro, America’s Test Kitchen (16 seasons), Cooks Country (9 seasons) and many others. They have also done several lifestyle shows, including A Moveable Feast and a woodworking show for GBH. “We do a little bit of everything,” said Production Manager Elena Malcolm. “We are fortunate to have a variety of clients over a diversified market, which keeps things interesting and steady.”

For Christopher Kimball’s Milk Street, DGA Productions was tasked with creating a look and production approach for the series and were actively involved in the production design of the show. They collaborated with the show’s producers to create a sun-filled set overlooking one of Boston’s historic neighborhoods. Some of the early production decisions they implemented were recording in Log and using prime lenses. This approach eliminated the need for an engineer to color match cameras on-set during filming— which proved to be a great time saver during filming and transferred the process of color matching to post-production. 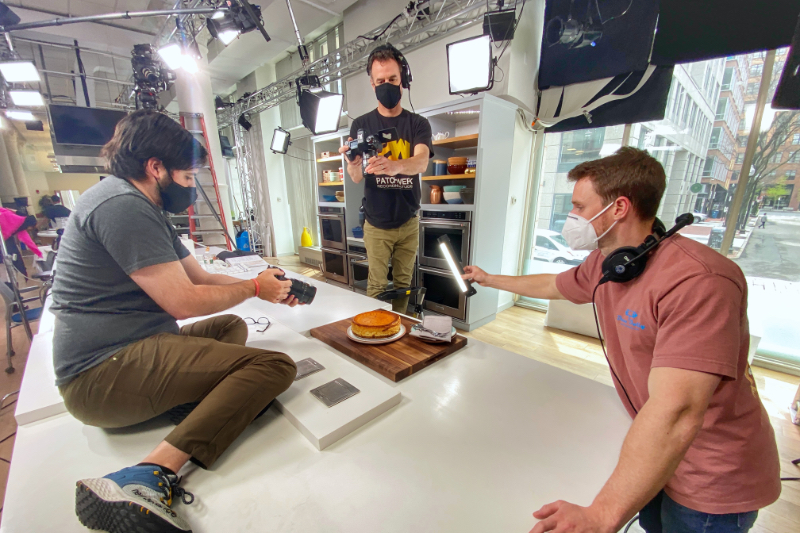 Part of the show is shot out in the field where the team shoots in a documentary style to capture as much footage as possible, giving the editors more material to work with. For location shooting, they use S1H, S1 and GH5 cameras. DGA Productions Director and Director of Photography Jan Maliszewski was an early adopter of LUMIX cameras starting with the GH2. “I'm a firm believer in having the right size production solution for whatever you're faced with,” he explained. “I love the LUMIX line of cameras because they fit our production footprint on the road.” Maliszewski, who has won 3 daytime Emmy’s for directing Milk Street, considers the LUMIX cameras critical tools for the show.

Shooting on the road, the team is usually just Maliszewski and camera operator and Emmy-nominated editor, Michael Andrus. For a recent shoot in LA, they used two S1Hs and an S1, which they used mainly for time lapse. “What we'll typically do, even if it's two people on camera, we’ll set the S1H up on a tripod to shoot 4K a little wider so our editors can punch in,” explained Maliszewski. “And then Michael and I operate the close up and the guest camera from the side. Those shots are usually handheld, or we'll use a monopod. This approach allows us to be nimble while capturing beautiful images.” 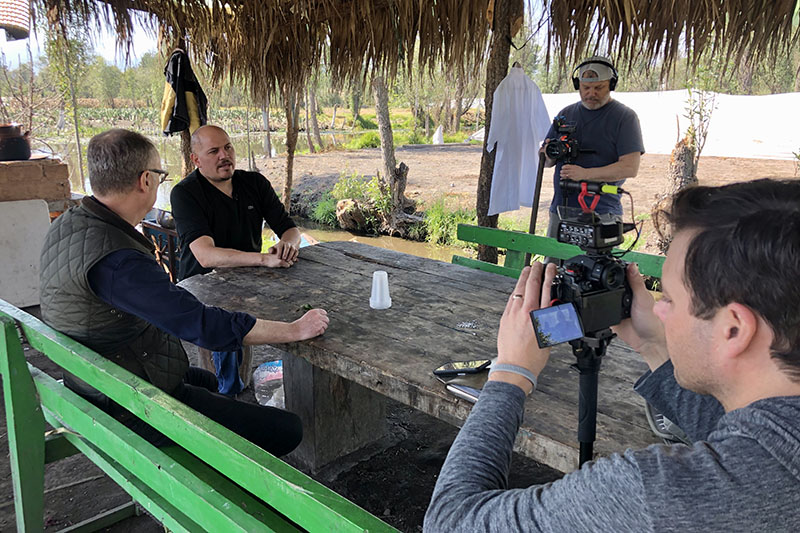 Since they don’t have a 4K delivery requirement, Maliszewski and Andrus usually record FHD (1920 x 1080) V-Log files at 23.98-fps in 200-Mbps ALL-I, but will sometimes shoot in 4K to capture a larger canvas for post. Regarding lenses, Maliszewski uses several L-mount lenses for his S1H and S1. He also uses several Canon EF mount lenses with the Sigma MC-21 L-mount adapter.

Maliszewski and Andrus also use the GH5 for B-roll with the LUMIX G LEICA DG VARIO-SUMMILUX 10-25mm, F1.7 ASPH., along with the Olympus M. Zuiko Digital ED 40-150mm f/2.8 lens. “Those two lenses astound me," revealed Maliszewski. "The close focus and range of the Panny/Leica saves having to carry 3 prime lenses and the Oly, with the amazing sensor stabilization of the GH5 allows me to smoothly operate a very long, fast lens handheld - working fast and stealthy with no tripod needed. Having less gear to tote around allows one to constantly be looking for B-roll moments. The lightweight form-factor staves-off the fatigue of lugging heavy gear all day.”

“A lot of times, we'll be shooting a segment at regular speed,” added Andrus, “and then something will be happening that I would like to shoot in slow motion. Now, we have another camera at the ready that's already set up for slo-mo. You don't have to go into the menus – just pick the camera up and shoot. It’s more efficient working that way rather than stopping the whole production to go through the menus. The key is remembering to put it back to regular speed.” 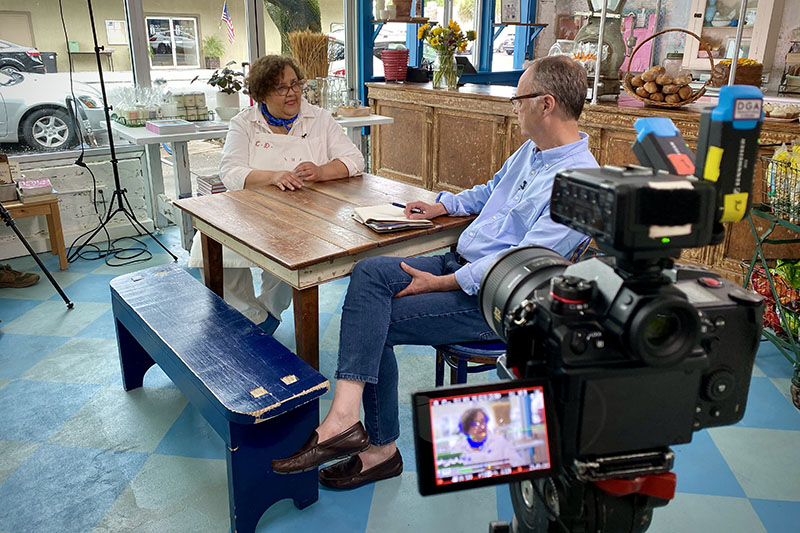 Shooting on location, Maliszewski and Andrus often shoot in commercial and home kitchens. According to Andrus, the kitchens are sometimes small, so they carry a small lighting package with just a few Litepanels and Quasar tubes. “We have to put a lot of stuff underneath the range hoods to get some light,” explained Andrus. “We bring little handheld lights for food beauty shots, which we try to get as much as possible. I don't think we'd be able to shoot these travel pieces with traditional larger cameras. With all the traveling and shooting on streets, we don't draw as much attention as we would with larger cameras.”

Maliszewski and Andrus also do not use HDMI monitors with their LUMIX cameras to be more agile. “If we're outside, I find the viewfinder to be amazing in the GH5 and the S1H, so if it’s bright out we are operating by simply looking into the camera’s viewfinder,” explained Maliszewski. “Dressing up the camera with too many add-ons is unnecessary in our working mode and just adds pounds and encumbrances that add weight and batteries, all of which can slow down the production. As has been said before, ‘Simplicity is the ultimate sophistication.’” 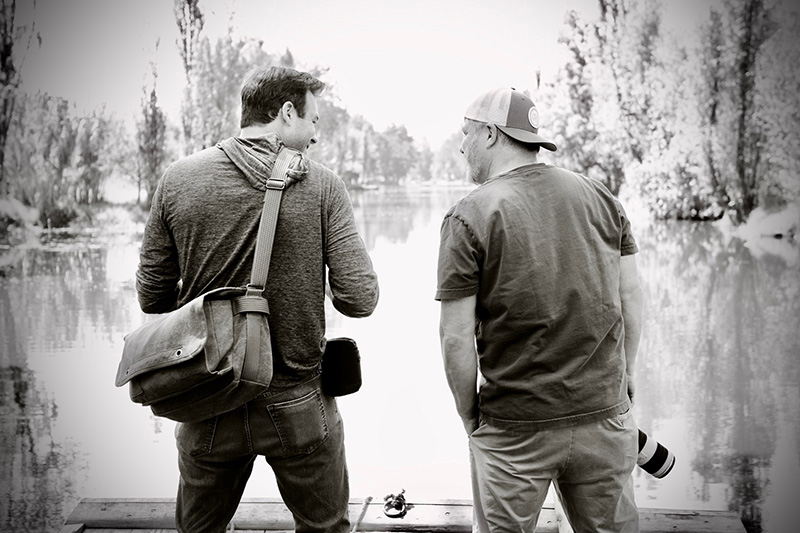 I'm a firm believer in having the right size production solution for whatever you're faced with. I love the LUMIX line of cameras because they fit our production footprint on the road.
DGA Productions Director and Director of Photography Jan Maliszewski

For the studio portion of Christopher Kimball’s Milk Street, the team uses a Sony Venice and FX9 for their primary cameras. According to Maliszewski, a lot of the LUMIX gear they’re using in the field is now being incorporated into the studio. For previous seasons, they used a jib but due to COVID, they’re employing less crew members in the studio. Instead of a jib, they employ a BGH1 as their overhead camera and use the LUMIX Tether for Multicam app to control it. On the BGH1, Maliszewski uses a LUMIX 12-35mm f/2.8 lens, as well as a 42” Rhino Slider and ARC II Head for left to right camera moves. He also likes that the BGH1 has a stable SDI out, which gives him more confidence that he is getting the shot he needs. Time Code “In” is a feature of the camera he appreciates as well.

“It has worked flawlessly for our studio production work – better than any overhead camera setup that I've ever used,” revealed Maliszewski. “We shoot in 4K and because we're delivering in 1080, post can punch into 1/4 of the frame and can create little corkscrew moves.” 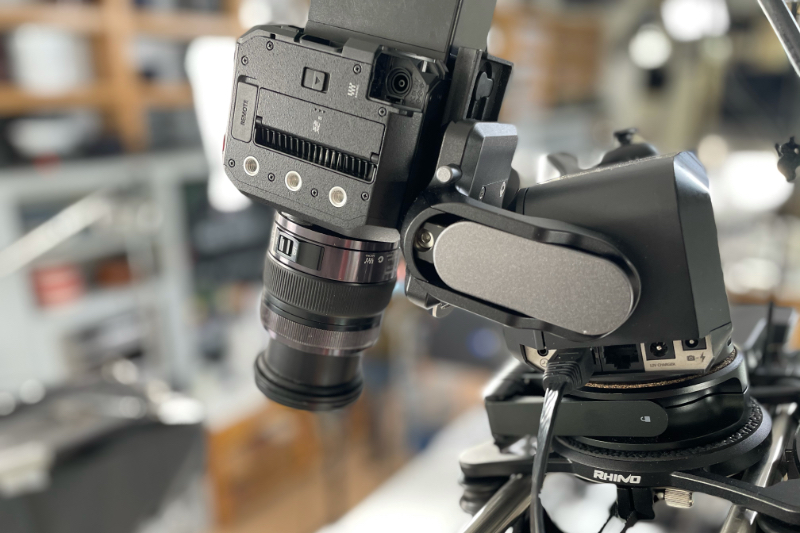 On the BGH1, Maliszewski uses a LUMIX 12-35mm f/2.8 lens, as well as a 42” Rhino Slider and ARC II Head for left to right camera moves looking down on the set. (Photo courtesy of DGA Productions)

The team also use two S1Hs and a GH5 with macro lenses for studio work. Since they have more resources and space for lighting, they make good use of Litepanels Gemini LED panels for higher output. Since there are large windows in the studio, for light control they use hard ND gel that they put in front of the windows, usually an ND3 or ND9. “We mainly use those hard gels, in conjunction with the LED lights in the studio,” explained Maliszewski. “The two basic modes is a high key, bright light outside from the street and our dimmable lights. And then as the day begins to fade and the clouds roll in, we’ll pull some of the gel.”

Christopher Kimball’s Milk Street is edited and graded in DaVinci Resolve. Travis Marshall, Michael Andrus, and Josh Mercado do all the post color-grading and work with several LUTs that were developed with Rule Broadcasting engineer, Alex Enman. The five-camera studio shooting is synced using timecode. 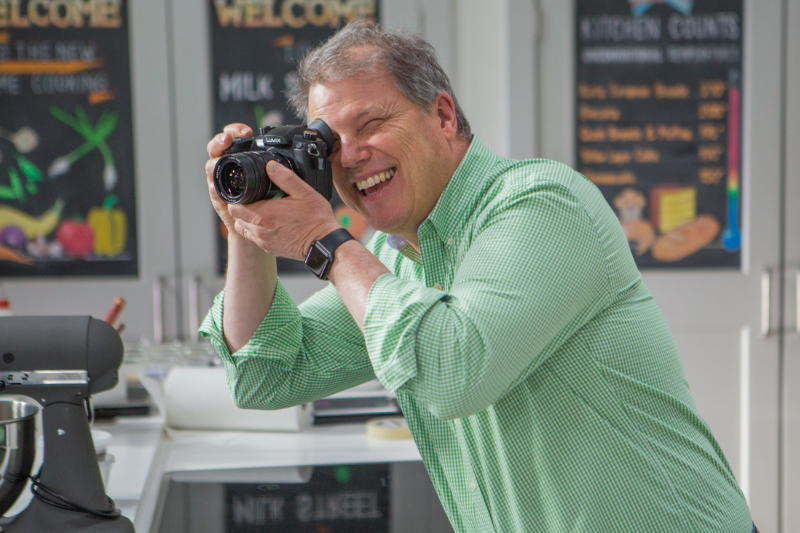 Shooting with LUMIX cameras has made Maliszewski more excited about his craft. (Photo courtesy of DGA Productions)

Overall, the LUMIX cameras have made things easier for DGA Productions. “After many years of carrying a 30 pound camera, you realize you can still have amazing picture quality in a much smaller form factor.” said Maliszewski. “Shooting with a LUMIX camera in my hand is like I'm flying and it has made me more excited about my craft. Michael and I took a recent trip and I think we only brought one tripod. We don't really use tripods all that much in the field…and I don't think anyone is missing them."

For more information on DGA Productions, visit their website here.