Before the DV revolution, the 1990s was the golden age of low-budget filmmaking. Filmmakers like Kevin Smith, Richard Linklater, Robert Rodriguez, and others self-financed their own 16mm movies and ended up getting distribution in theaters to reach a wide audience. Today that distribution model has changed, but even with less opportunities for theatrical distribution, and no ancillary revenue from DVDs, there is a bright side. Thanks to large sensor compact mirrorless cameras and inexpensive NLE systems, it’s much easier (and cheaper) to produce a professional looking film than ever before. Just ask LA-based filmmaker Andrew Simonian.

Simonian recently wrote and directed feature film, The Take Out Move, for a budget of only $3,500. Shot in 4K with the LUMIX GH5 mainly at one location, the film follows what happens when a shadowy figure instructs two different men to take out the same woman and they both end up at her home at the same time and must fight each other through absurd situations to be the one to complete the assignment.

Simonian grew up in the suburbs of Philadelphia watching a lot of TV, but never really stopped to consider that real people in California were making all those shows for a living. He studied finance at the Wharton School of Business, where he became interested in film and television. “I kind of took a sharp right turn,” revealed Simonian, “so I graduated early and moved out to LA to pursue a career behind the camera in Hollywood.” 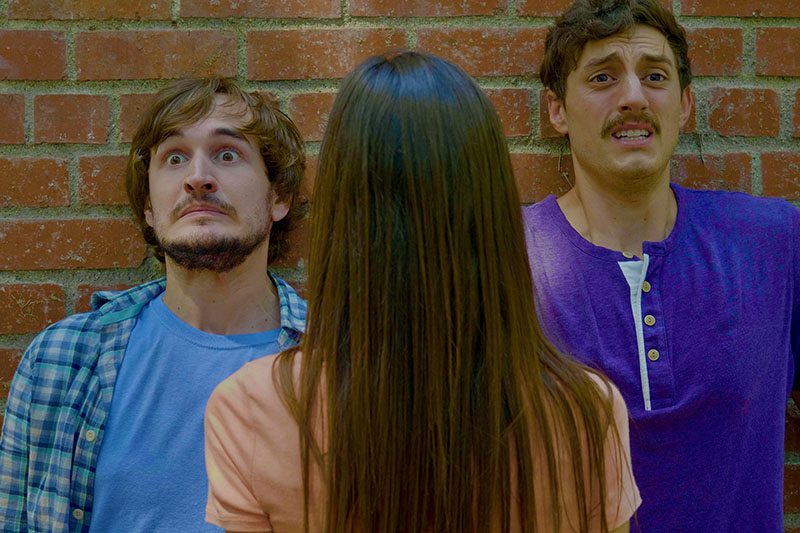 A still from filmmaker Andrew Simonian's The Take Out Move, which was produced for $3,500 and shot with the LUMIX GH5.

Simonian began working at The William Morris Agency in their television syndication department just as the unscripted TV market was taking off. “I always wanted to make a movie, and after working in television production for so long, I believed I could make a low-budget indie film,” said Simonian. “People told me that for a half a million dollars I could make a ‘cheap movie’, but I knew no one would give me half a million dollars because to them I was just some reality TV executive. So much of Hollywood is waiting for other people’s permission. I didn’t want to wait around anymore.”

With a hole in his schedule, Simonian told himself that he was going to go out and shoot a film. Although he didn’t have a specific budget in mind, he wanted to make an entertaining feature film for as little money as possible. He knew he needed an idea that was self-contained that he could shoot himself.

Based on a short film he made in college, Simonian wrote a feature version of The Take Out Move. He then called in a few favors from his contacts, and quickly shot it. “I knew I was going to shoot it in my house, because part of the way to shoot a movie so cheaply is to remove all the barriers in front of you,” explained Simonian. “The more people you need to ask for favors, the harder it is to get done.” 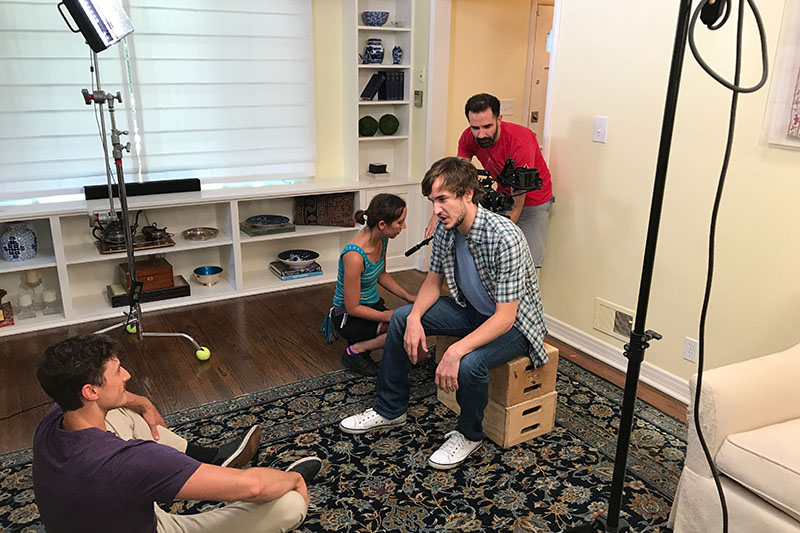 Director Simonian and DP Garen Mirzaian (pictured in red shirt) shot the majority of the film inside Simonian's house to save on location fees and favors from friends.

So much of Hollywood is waiting for other people’s permission. I didn’t want to wait around anymore.
Filmmaker Andrew Simonian

One of the first people on board was cinematographer Garen Mirzaian, whom Simonian had known for years. Knowing he had to work primarily by himself without a gaffer or grips, Mirzaian knew he needed a camera that was compact and lightweight. Mirzaian had recently worked with the GH5 on a commercial and loved the camera's form factor, color science, and media management. With little prep time, Mirzaian rigged up a GH5 and placed it on sticks, shot handheld, as well as mounted it to a small gimbal. He was convinced it could work.

With his limited budget, Mirzaian knew he couldn’t light the way he normally does. Working at Simonian's house, he lit everything with strong key lights coming through windows in order to shoot up to 10-12 pages of the script per day. “We went for a broad comedy look with nothing too dramatic,” explained Mirzaian. “There were really no challenges in using the camera, which is just a tool to me. I feel like there would have been more challenges if I went with a bigger camera.”

Mirzaian captured 10-bit Long GOP files in 4K DCI (4096x2160) in 24p. He monitored footage on his GH5 using a Blackmagic Video Assist and powered everything off V-mount batteries with a D-Tap. For lensing, he mainly used an Olympus M. Zuiko Digital ED 14-42mm F3.5-5.6 EZ Lens due to its size and versatility since they were shooting in tight locations. He also used several LUMIX G-Series prime lenses, as well as Nikon lenses with an F to MFT adaptor. 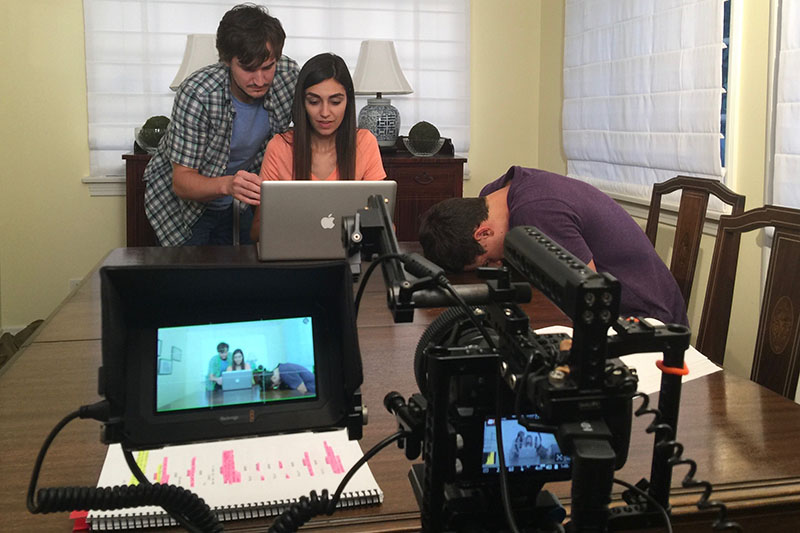 For Simonian, the biggest advantage in shooting with a compact mirrorless camera over a traditional cinema camera was ease of use. “It was super helpful to shoot with a small camera inside a house that had limited space,” explained Simonian. “We could move around easily and fit the camera in tight places a larger camera wouldn’t fit. It ended up playing out really well.”

There was a day that Mirzaian could not be there, and instead of canceling the day’s shoot, Simonian was determined to shoot the entire day himself. “Garen gave me a five-minute tutorial and showed me how all the meters worked and how to use peaking,” revealed Simonian. “It was a day that we went to a bunch of locations – iconic places like the Hollywood sign and Griffith Park. We were out in public with no permits, or lighting, and it was basically just me and the two actors.

“I wanted it to look like we were tourists,” continued Simonian. “It looked like I was just taking photos of friends, which was awesome. If I had set up a tripod, a security guard would have asked me what I was doing there. I wanted to remove all complications and just get what we needed done. The GH5 was perfect for that.” 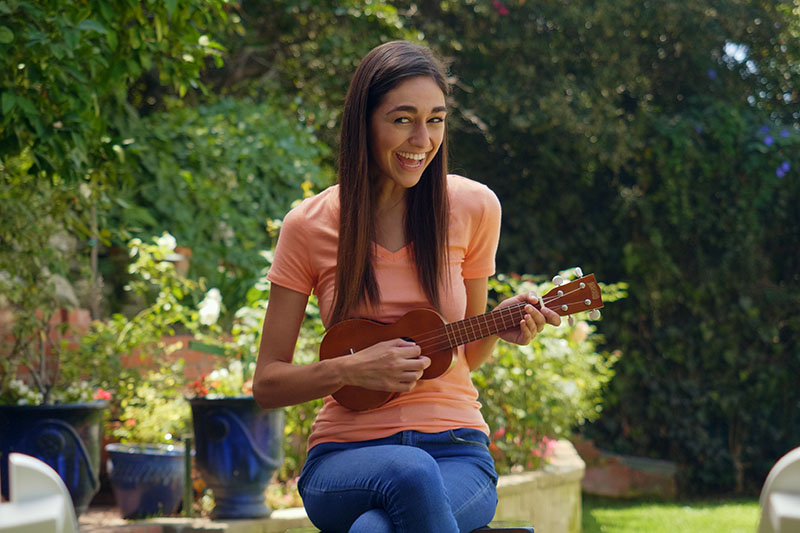 As most indie filmmakers know, getting distribution for your film is as difficult as getting it "in the can". Typically, filmmakers are exhausted (and broke) after production ends and often underestimate the challenges ahead. With Simonian’s experience in production, plus his background in business and finance, he took the distribution game very seriously.

First, he took The Take Out Move on the festival circuit where it got accepted into over 25 festivals around the world and picked up eleven Best Feature / Best Comedy awards. He then went through the process of finding a sales agent to represent his film, getting title clearance, insurance, and codifying the copyright for his film. “Once you want to distribute your movie,” said Simonian, “there’s a whole series of hoops to jump through. I was learning every step of the way, and it was a stressful process, but it all worked out really well.”

The single biggest advice Simonian gives to filmmakers looking to make their own feature is to not wait for a green light. “With all of the amazing technology out there, there’s really no excuse,” he said. “You have to know what you are good at and find people who are good at the things you're not good at. It sounds trite, but you just need to go make the movie, and then go from there. Because if you don't, you're just going to sit there and talk about it.”

Distributed by Freestyle Digital Media, The Take Out Move is available on all digital platforms, including Amazon, iTunes, Google Play, and YouTube Movies. For more information on the film, visit the film's official website here.