In today’s technology-driven society, innovation is crucial for organizations to remain competitive. But what type of innovation has proven effective to drive growth? How are advanced technologies impacting organizational productivity and efficiency? And how can public and private sectors work together to foster innovation and competitiveness?

That was the consensus of a panel of leaders from diverse industries, countries and disciplines assembled for a discussion at the Toronto Global Forum recently. 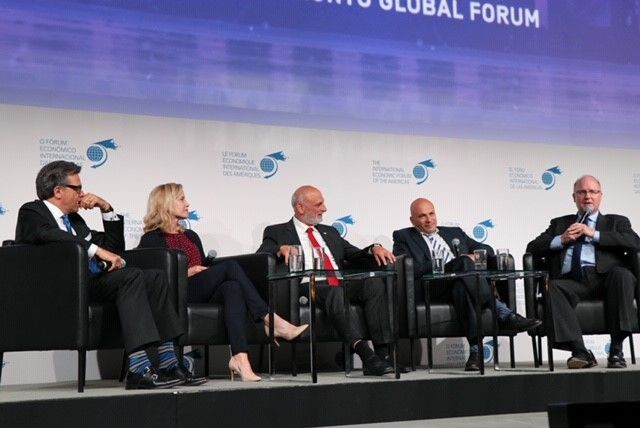 Electrification – replacing internal combustion engines with electric power – is not new for Panasonic. We helped power the last two revolutions in the automotive industry. We supported Toyota’s groundbreaking hybrid models and, most recently, helped power Tesla’s dominance in the consumer electric vehicle space. These seismic consumer trends are also reshaping the industrial space.

“We will be fully battery electric with our equipment in underground mines,” explained Denise C. Johnson, group president, resource industries, for Caterpillar. “But how do you take a large mining truck that weighs 400 tons and is over 20 feet high and put a battery in that and make it work…in a rigorous application? It’s a different equation, but that’s what customers are looking for today.”

The pervasiveness of machine sensing, control and connectivity – what Tolga Kurtoglu, CEO of PARC, a Xerox Company, called machine intelligence – is changing the dynamics of our world and powering autonomous vehicles.

Particularly over the last few years, we’ve seen the blurring of the physical and digital.

We collaborate with most Fortune 500 companies as well as with hundreds of start-ups and smaller tech and manufacturing companies in nine of the 12 disruptive technologies identified by McKinsey. Together, these technologies are expected to create an estimated $14 trillion in economic impact.

Our role has changed from a company that delivered consumer experiences to one that empowers our customers to deliver them. We leverage and connect technologies and share innovations between industries to facilitate our customers’ digitalization journeys.

The backbone of it all: data

Thanks to the rise of artificial intelligence, data is the backbone of that digitalization journey and innovation, including how quickly and efficiently we design new products and solutions. It’s how every industry will move forward.

Working with Departments of Transportation in three states in the U.S., Panasonic is leveraging data generated from the connectivity between vehicles and infrastructure to help officials reduce traffic congestion and CO2 emissions. We believe that the near real-time analysis of this data can address the 40,000 traffic fatalities in the U.S. each year, most of which are preventable.

From design to delivery and everything in between, data is fueling innovation and shaping our experiences. It’s no wonder more than 60 percent of large companies report having a Chief Data Officer, a marked increase over the last 10 years, according to a recent report by New Vantage Partners.

If data is the new the oil of our economies, as the popular metaphor goes, then we need to extract, refine and maximize it. And with an eye toward privacy and security, any regulatory oversight should enable global data flows and spur meaningful innovations while mitigating risks.

Panasonic’s Jeff Howell was a speaker at the 2019 Toronto Global Forum, an international conference fostering dialogue on global issues that is held under the auspices of the International Economic Forum of the Americas. Jeff joined four leaders from diverse backgrounds and industries for a panel entitled “Innovation: The Path to Growth” that explored how business is transforming and what organizations need to do in order to remain competitive in the global marketplace.