For a young cinematographer, Gareth Paul Cox is one versatile shooter. Growing up in Florida, Cox bought a Super 8 camera and a 16mm Bolex off of eBay and began shooting skateboard and surfing movies that played at film festivals throughout the country. As the years passed, he came up the camera ranks shooting a variety of projects (many with his Panasonic AG-HVX200), including industrial videos, documentaries, short films, branded content, indie features, and even fashion photography, assisting for acclaimed photographers like Annie Leibowitz and Bill Heuberger. Cox also attended AFI, where he had several mentors, including cinematographers Jacek Laskus, ASC and David Stump, ASC. [Cox helped write sections of Stump's acclaimed book, Digital Cinematography Fundamentals and Techniques.]

Cox recently shot up-and-coming director Aundré Johnson's tentatively titled project, The Driver, with a Panasonic VariCam LT 4K cinema camera. The ambitious 15-minute short takes place mostly inside a car, where the LT's compact form factor was a big advantage. It tells the story of a limo car service driver, who ventures off the beaten path to start his own car service using borrowed money from individuals with possible mob ties. 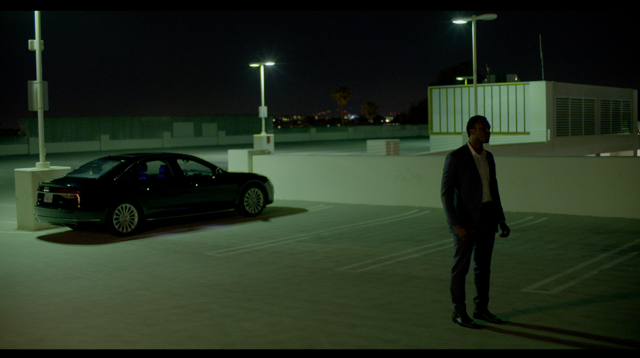 For Cox, there were several big challenges for the low budget short, including driving and shooting on LA streets without a process trailer, or any serious rigging. The hero car was an Audi A8, in which Cox was the only crewmember in the car with the actors, plus an open walkie. Sound was recorded remotely and production had wireless packs in the 15-seat follow/lead van where director Johnson had a wireless video tap (Teradek Bolt), as well as seating make up, hair, camera ACs, and a production assistant.

Much of the story takes place at night, so Johnson and Cox wanted to see and feel the outside LA world as a character itself. Since the car was rented, they could not remove the front windshield so Cox had to figure out where to put his camera. After extensive testing at Panasonic Hollywood, Cox knew the LT had the latitude to hold shadow and highlight detail but he was mainly concerned with lensing and shooting angles. To give him a variety of camera angles, he rented a Optex Borescope system from Division Camera. “The Borescope is similar to a periscope and Division has one that is very modular in that you can pull parts off of it,” explain Cox. “I added a right angle prism, which let us easily use it inside the car. But as a result you lose a few stops of light. This is where the advantage of the LT’s native 5,000 ISO came into play because we could afford to lose a few stops.” 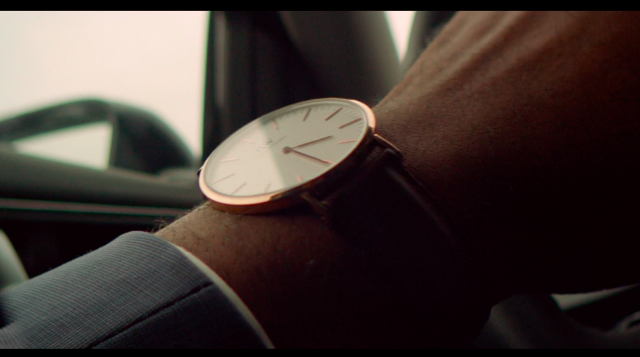 What the Borescope allowed Cox to do was to have his lens between the dashboard and the front windshield of the car and shoot back into the car without seeing his reflection operating from the passenger seat. Another valuable tool for Cox was a Cine Saddle, which is essentially a bean bag that cradles the camera without having it hard-mounted. “A lot of the play between the characters was obviously the driver seat and his clients,” he says. “When you drop somebody off on the curb, you typically want to drop them off on the passenger side so the client was usually sitting behind the passenger seat, which was another challenge. We wanted the camera to be able to move and have different angles because at the end of the day, we are driving around in a car so how do you add tonality to that? How do you add the moodiness or uncertainties the driver is feeling to the compositions? Ultimately it’s his story and it’s being told from his point of view. With the tools that we were afforded, I think we were able to achieve it.”

For his lenses, Cox rented a full set of Optar Super Speed primes (14mm — 75mm) from Division Camera, which open to a T1.3 so he was able to use a minimal amount of light at night. According to Cox, the lenses are Russian made glass that try to rival the look of Zeiss Super Speeds. “I really fell in love with the 28mm,” he explains. “There was very little distortion and a lot of aberrations, which was the nature of this glass and one of the things we liked. The 14 and the 18 had a little more of a fisheye look so I tended to stay between the 28 and the 50.”

With the LT, Cox captured 4K (4096 x 2160) 422 AVC-Intra files, as well as HD proxies files to P2 cards. He also recorded both formats in V-Log since Johnson and editorial were working with the 4K files and Cox was pulling proxies for his own reference material. “Unfortunately I didn’t have the time to build out any LUTs,” says Cox, on the quick two-day shoot. “It was more about trusting the camera’s wide latitude than understanding the ‘chemical’ make up of the sensor.”

Cox’s lighting package consisted of two Litepanels’ Astra 1 x 1 Bi-Color LEDsand LED strip lights. “A friend of mine, Joshua Stern, from Grounded Hollywood, was the best boy on the movie Drive and he was also the gaffer on The Nice Guys,” explains Cox. “They [Grounded Hollywood] provided us with LED technology that they had designed on Drive, which allowed us to put LED strips floating on grip arms mounted off suction cups over the windows. We had six to eight LED strips — one over each of the four windows and two over the back and two shooting through the sunroof.”

Cox made the creative decision to shoot everything at the VariCam LT’s native 5,000 ISO setting because he wanted to be consistent with the noise floor for both his day and night scenes. For day scenes, Cox would simply use the LT’s internal ND filter wheel. “Because the film was only 10–15 minutes long, I was concerned about going from super smooth looking imagery — if you rate it at 800 — to the 5,000, which has a little more noise,” he explains.

Cox also uses a light meter, which was “engrained” in him from his days as a photo assistant and working on 35mm movie shoots. “Once I understood the camera’s latitude — where I would lose my highlights and shadows, or where I see too much noise — that’s how I rated the camera with my meter,” says Cox. “I didn’t even use the EVF because of our configuration in the car. I used a TV Logic [display monitor] and my light meter and that was how I got my exposures — all going to V-Log.”

Another challenge was that because his lead character was African American, Cox was concerned he would lose skin detail. To help offset this, he set his meter at 2,500, which was overexposing by a full stop for night shooting. “You can do that in camera, but I preferred to leave it at the base setting and not readjust in camera,” he explains.

The lights outside the car were DMX wireless controlled and the follow/lead van seated his gaffer, who was dimming and changing the color of the lights as they were driving to replicate the practical lights outside. “If a car was passing from the other side of the street and the sodium vapor lights that illuminated the street would hit the windshield, it would send a glare into the interior of our car,” explains Cox. “In some cases I didn’t want that so if we found ourselves on a really bright street, I would either change my T-stop slightly based on the scene, or I would adjust with some duvetyn over the windows. We were getting into that range where the ambient light on the street was too intense and changed the desired look and feel that we wanted in the interior of the car.”

Currently Cox is shooting Little Rituals, a feature horror/thriller using two “Panavised” VariCam 35cameras and recently completed a short documentary, directed by Ricky Rojas, about a former African American professional surfer. He also has a freelance position with NFL Films, in which he shoots and operates on shows like HBO’s Hard Knocks, A Football Life, and more.

For more information on the Panasonic VariCam LT, visit http://business.panasonic.com/VARICAMLT.html.