Based on the manga series of the same name by Tsugumi Ohba and Takeshi Obata, Death Notestars Nat Wolff as Light Turner, a young man who obtains a supernatural notebook that gives him the power to exterminate any living person by writing his or her name in the notebook. Willem Dafoe plays Ryuk, a demonic god of death and the creator of the Death Note. The stylized Netflix feature film was directed by Adam Wingard (V.H.S., You’re Next) and shot by cinematographer David Tattersall, BSC (The Green Mile, Star Wars: Episode I, II, and III) with VariCam 35s in 4K RAW with Codex VRAW recorders.

Tattersall had worked with Wingard on the horror television series, Outcast, and because they had a great collaboration, the DP was asked to work with him again on Death Note. Per Tattersall, he wasn’t aware of the manga series of books but during pre-production, he was able to go through a visual treasure trove of manga material that the art department compiled. 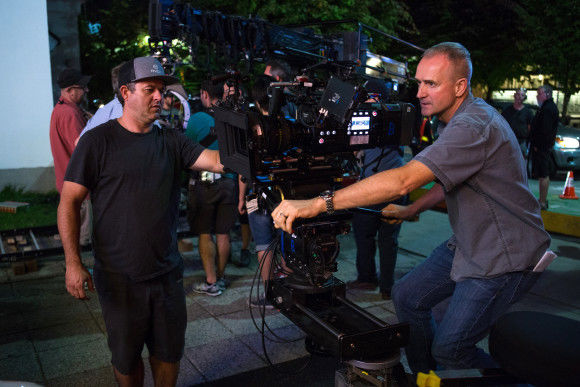 Instead of creating a “cartoony” look, Tattersall and Wingard were more influenced by classic horror films, as well as well-crafted movies by David Fincher and Stanley Kubrick. “Adam is a maestro of the horror genre and he is very familiar with constructing scenes around scary moments and keeping tension,” explains Tattersall. “It wasn’t necessarily whole movies – it was more about taking odd sequences that we thought might be relevant to what we were doing. We had a very cool extended foot chase that we referred to The French Connection (shot by Owen Roizman, ASC) and Se7en (shot by Darius Khondji, ASC), which have a mix of handheld, extreme wides and long lens shots. Also, because of Adam’s love of Kubrick movies, we had compositions with composure and symmetry that are reminiscent of The Shining, or crazy wide-angle stuff from A Clockwork Orange. It sounds like a mish mash but we did have rules.” 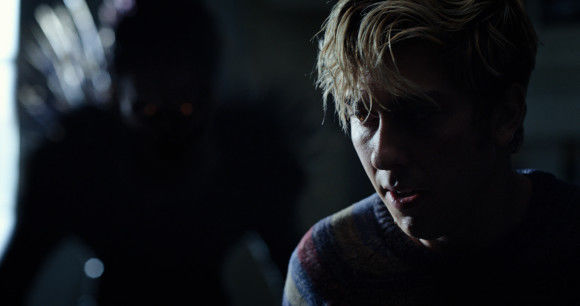 Dialogue scenes were covered in a realistic non-flashy way and for Tattersall, one of his biggest challenges was dealing with the demon character, Ryuk, both physically and photographically. The team started with a huge puppet character with puppeteers operating it, but it wasn’t a practical approach since many of the scenes were shot in small spaces such as Light’s bedroom. “Eventually, the practical issue led to us using a mime artist in full costume with the intention of doing face replacement later,” explains Tattersall. “From our testing, the approach of ‘less is more’ became a thing – less light, more shadow and mystery, less visible, more effective. It worked well for this character who is mostly seen hiding in the shadows. It’s similar to the first Jaws movie. The shark is strangely more scary and ominous when you only get a few glimpses in the frame here and there – a suggestion. And that was our approach for the first 75% of the film. You might get a brief lean out of the shadows and a quick lean back in.  Often, we would just shoot him out of focus. We’d keep the focus in the foreground for the Light character and Ryuk would be an out of focus blob in the background. It’s not until the very end – the final murder sequence – that you get to see him in full head to toe clarity.”

Tattersall shot the film with two VariCam 35s as his A and B cameras and had a VariCam LT for backup. He shot in 4K DCI (4096 x 2160) capturing VRAW files to Codex VRAW recorders. For lensing, he shot with Zeiss Master primes with a 2:39:1 extraction. “This set has become a favorite of mine for the past few years and I’ve grown to love them,” reveals Tattersall. “They are a bit big and heavy, but they open to a T1.3 and they’re so velvety smooth. With this show having so much nightwork, that extra speed was very useful.” 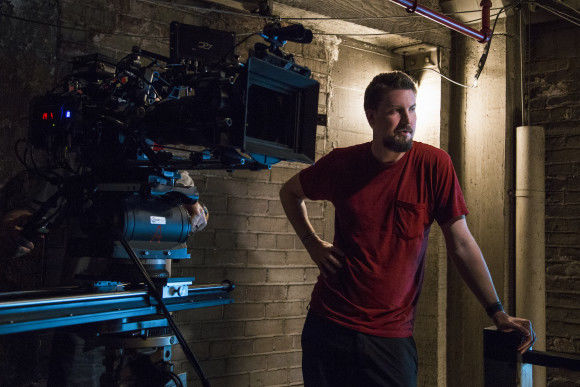 In terms of RAW capture, Tattersall tried to keep it simple, using Fotokem’s nextLAB for on-set workflow. “It was almost like using a one light printing process,” says Tattersall. “We had three basic looks – a fairly cool dingy look that sometimes falls back on the saturation or leans in the cold direction. I have a set of rules but I occasionally break them. We tried as much as possible to shoot only in the shade – bringing in butterfly nets or shooting on the shady side of buildings during the day. It was Adam’s wish to keep this heavy, moody atmosphere.”

Tattersall used a few tools to capture unique visuals. To capture low angle shots, he used a P+S Skater Scope that lets you shoot low to the ground. “You can also incorporate floating Dutch angles with its motorized internal prism, so this was something we did throughout,” says Tattersall. “The horizon line would lean over to one side or the other.” He also used a remote rollover rig, which allowed the camera to roll 180-degrees when on a crane, giving Tattersall a dizzying visual. 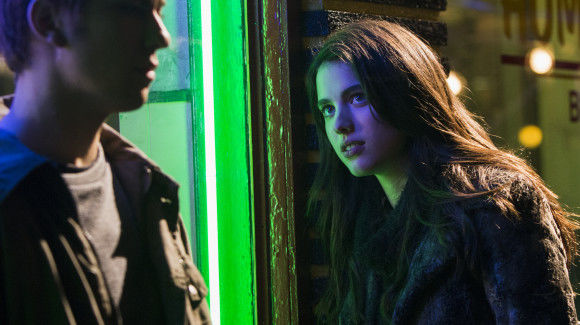 Per Tattersall, art direction created many sequences based on neon light environments. (Photo by James Dittiger/Netflix)

We also shot with a Phantom Flex to shoot 500-fps,” continues Tattersall. “We would have low Dutch angles, an 8mm fish eye look, and a Lensbaby to degrade the focus even more. The image could get quite wonky on occasion, which is counterpoint to the more classic coverage of the calmer dialogue moments.”

Although he did a lot of night work, Tattersall did not use the native 5,000 ISO. “I have warmed to a new range of LED lights – the Cineo Maverick, Matchbox and Matchstix. They’re all color balanced and they’re all multi-varied Daylight or Tungsten so it’s quick and easy to change the color temperature without the use of gels. We also made use of ARRI Skypanels. Outside, we used tried and tested old school HMIs or 9-light or 12-light MaxiBrutes. There’s nothing quite like them in terms of powerful source lights.” 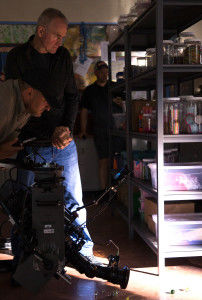 Death Note is also a very colorful film and there are several sequences where art direction was based on neon light environments. “[Art Director] Tom Hammock decorated one striking exterior street location with different colored neons,” explains Tattersall. “It had blue and green neon and another cafeteria set where the dominant practical lighting was this quite saturated cobalt neon. We kind of ran with it. There’s one sequence where the Light character and his father have this conversation outside the house amongst a group of police cars and we tried to light the whole thing just using the police car flashing lights.”

Death Note was finished at Technicolor by colorist Skip Kimball. “The grade was mostly about smoothing out the bumps and tweaking the contrast” explains Tattersall. “Since it’s a dark feature, there was an emphasis on a heavy mood – keeping the blacks, with good contrast and saturated colors. But in the end, the photographic stylization came from the camera placement and lens choices working together with the action choreography.

“This is the first time I used the VariCam,” concludes Tattersall. “I went in with a little trepidation but I quickly grew to like the camera and its smooth and naturalistic look.”

To watch Death Note, visit www.netflix.com. (You will need a Netflix membership to view.)

Here is the official trailer for Death Note:

For more information on the VariCam 35, visit www.us.panasonic.com/varicam.