According to DP Colin Noel, there are certain locations that a cinematographer dreams to shoot in. When the music video concept of Hartford, CT-based Bronze Radio Return’s Only Temporary was presented to him, it was an opportunity he couldn’t pass up. “A nighttime amusement park with a Ferris wheel was on my list of places that I wanted to shoot so I was super excited about it,” says Noel. “We started looking at gear and like most music videos, our budget was pretty low. We wanted to try and use the practical lights inside the amusement park as the actual background lights as much as possible without having to mimic them. We started looking at the VariCam LT and that’s where we decided to go.”

The music video was shot at The Island, an amusement park in Pigeon Forge, TN, right outside of Nashville. Besides mainly working with practical light, Noel’s other big challenge was that they were only allowed to shoot from midnight until sunrise since the entire music video takes place at night. “We essentially shot the whole music video in six hours because that’s all the time we had in the park,” reveals Noel. “Even if we had rigs and lights to simulate the amusement park, we wouldn’t have time to set up, dial it in, and shoot the video in such a short period of time. How do we use the existing light and bring up a key light for our talent, but also use background light as much as we can with just what’s there?” 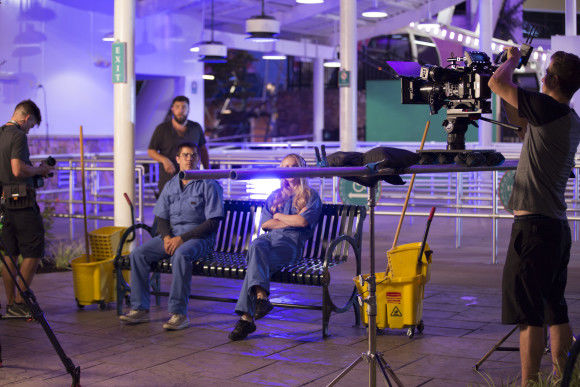 According to Noel, a nighttime amusement park with a ferris wheel was one of his dream locations to shoot in.[/caption]

For developing the look, Noel watched a number of videos that were shot in amusement parks but couldn’t find anything as colorful or vibrant to what he and director Sean Davé of Revolution Pictures were looking to create. One of the major inspirations was the music video, Weekend, by Priory. “It’s got this really cool anamorphic vintage feel to it,” reveals Noel. “It was definitely one of the visual references we used for the color palette and how we wanted it to feel.”

Noel shot the video with a single VariCam LT with Cooke anamorphic lenses, which Noel chose over a set of vintage Hawk anamorphics. “We ended up choosing the Cookes because we wanted to capture a sharper image while still having the option of knocking it down in post for a softer feel,” reveals Noel. “The Cookes are a little faster and a little easier to work with while the Hawks are of different sizes and weigh a ton. With such a quick turnaround on the video, I wanted something to give us exactly what we wanted.” 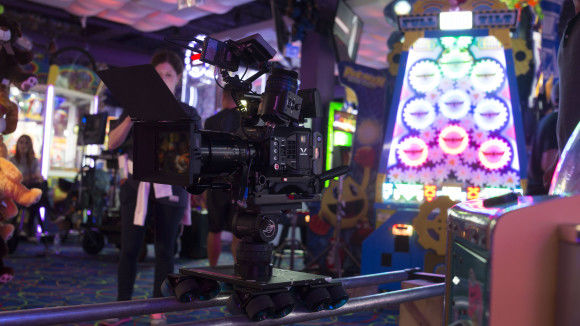 Over much debating, Noel shot the video in 2K with most of his footage shot at 48-fps because the video features numerous speed ramps within shots. According to Noel, he shot in 2K over 4K because it was going to be a 2K delivery and he wanted to capture in AVC-Intra 2K 422. (4K/UHD AVC-Intra 4K 422 only captures up to 30p.) “I opted for capturing more information at a smaller resolution,” he says.

Noel also captured in V-Log, creating a viewing LUT with Teradek Colr while visitors were still in the amusement park. He built the LUT based on the look they were going for and also recorded HD proxy files with the same LUT. [The editor does not like working with flat Log footage.] “The LUT was fairly simple,” explains Noel. “It was a Rec 709 look with a bit of extra contrast. I also warmed the midtones up a bit and pushed a little more blue into the shadows for more of a Hollywood blue/teal kind of look. We didn’t spend a lot of time on it — maybe five or ten minutes with our female talent and then we had to move on to actually get the ball rolling.”

Because he was working at night, Noel found himself shooting with the native 5,000 ISO quite often. Says Noel, “I went into it thinking we would set it at the 5,000 and I would knock it down to like 2,000 with ND so I wouldn’t gain the sensor. Towards the end, I honestly started using 5000 for everything. I thought the footage might look too bright in terms of what I’m used to, but it was actually really nice for the background to have that extra latitude. You can walk the key back further so you can have a wider shot and with anamorphics, it’s all about those nice wide shots. Being able to walk our key light back even further so we can get wider was really nice for our set-ups.”

Noel did most of key lighting with two ARRI 2K studio lights through an 8 x 8 silk. He also made good use of an ARRI Skypanel, which he created colorful keys for scenes shot in the amusement park’s video arcade. “You can literally just dial in the color and flip through a few options to figure out which look you like and what works in the environment,” he says.

For the most part, Noel relied upon practical light in the park. “With VariCam, the glow from the practical lights was actually giving both a nice back edge and a back light to our subjects,” he explains. “With other cameras, you would see the lights in the background and they would have been nice but it wouldn’t have read on the talent as much as it did, especially when you’re moving around really quick. For our schedule, every little bit helped so if you don’t have to add an extra light, it’s a real time saver.”

Noel was also impressed with the way the LT captured color and skin tones and feels the VariCam’s color is up there with the Alexa. “Everybody knows that RED has a bit of a problem when it comes to skin tones. It’s nothing that can’t be fixed without a good colorist, but out of the box the Panasonic VariCam LT looks really great. I was really quite pleased with it.”

Check out the final product: