On December 10th, 2016, we held our VariCam training workshop (part four of a seven-part series). The topic of the workshop was “Lighting for VariCam and the practical advantages of shooting with native 5,000 ISO”. With approximately 40 people in attendance at Panasonic Hollywood Lab’s 4K theatre, cinematographer Charles Papert (Crazy Ex-Girlfriend, Key and Peele) gave an informative presentation where he screened clips from two recent television shows he shot with the VariCam 35 – MTV’s Mary + Jane and Fullscreen Studios’ Cassandra French’s Finishing School.

Lighting With VariCam – Less Is More

Many of the scenes Papert screened were of subjects walking down LA streets at night. He typically lit his subjects with LED chinaball fill or larger bounces with ambient street lamps illuminating the background. The skin tones looked good and although there was noise in the shadows, according to Papert, “the noise almost emulated film grain.” He also revealed that noise reduction software can easily knock it down in post. When shooting tests at native 5,000 ISO, he typically found himself at an f/4.5-6. 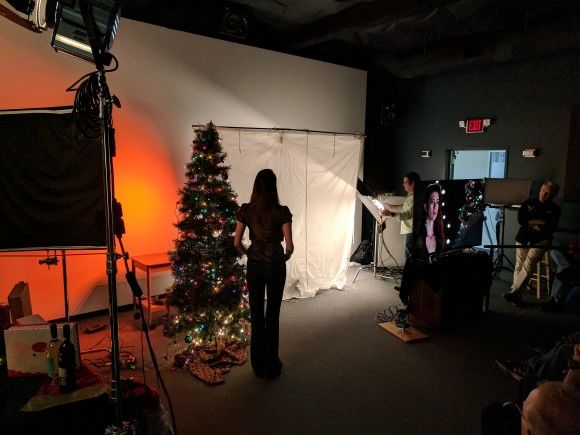 DP Charles Papert creates a soft light on his subject with a booklight.

For interior stage work, Papert’s preference was to be at native 5,000 ISO dialed down to 2,000, which he feels is a close match to the native 800 in terms of noise. He found that this setting cut his light wattage in half with his biggest unit on stage being a 5K Tungsten light – normally a 10K with another camera.

For one scene, Papert showed the separation between trees and the night sky in the background. At 800 ISO, he revealed he would have to use large lighting units lighting trees far in the background. He also showed a scene where he said he was able to achieve hair separation on one of his female leads, enabling him to kill his backlight.

After the presentation and viewing of clips, Papert conducted an interactive lighting demonstration with the audience, showcasing the VariCam’s strengths in low light. His model, Vanessa White, decorated a Christmas tree while Panasonic Cinema Development Manager Laurence Nunn operated a VariCam 35 tethered to a Panasonic 4K consumer monitor for attendees to view live results. 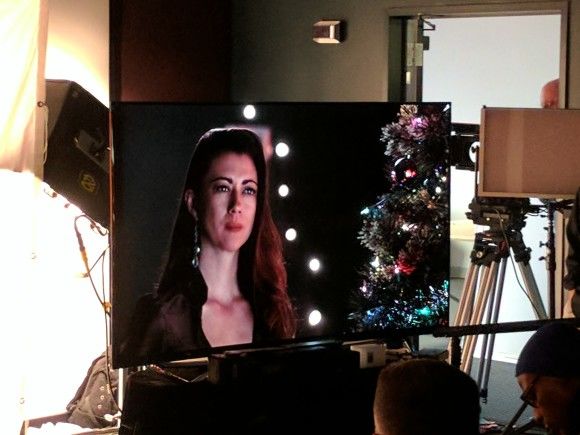 For his main lighting set-up, Papert had a 1K ARRI Tungsten Fresnel hitting white cards placed high on the wall as a soft backlight. He also placed a small 150w Tungsten light on the floor bouncing off a muslin floppy onto White. To add a touch of color, he bounced a Xylight IS3 variable color temperature LED panel off the theatre screen as a sidelight. The fourth source were Christmas lights, which were on dimmers. When at full power, White was blown out at native 5,000 ISO, so most of the instruments were dimmed to 50% or less.

Papert also brought up an attendee from the audience to stand side-by-side with White, just to see how the VariCam resolves different skin tones. 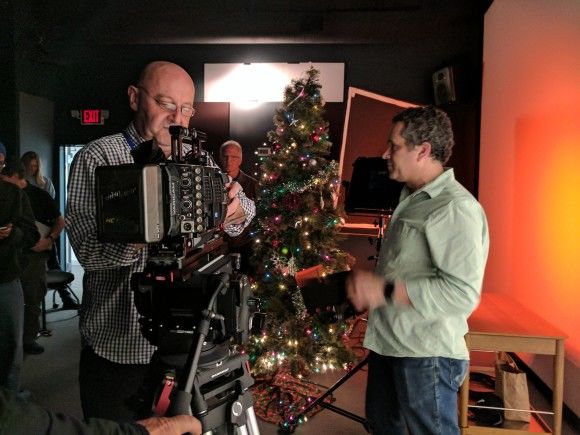 Cinema Development Manager Laurence Nunn and Papert set up the VariCam 35 for a shot.

For a second lighting set-up, Papert set up a booklight, which consisted of a Kino Flo 2By bounced into the theatre screen, shooting though an 8×8 full grid. The booklight gave a flattering soft light that wrapped around White – even softer than a Chimera.

For judging exposures, Papert revealed he likes to set his final levels with scopes  because in his opinion, a light meter is less than ideal at the levels the VariCam can capture.

All-in-all, this was a great presentation by a cinematographer well versed in VariCam technology, as well as the art and craft of lighting – the most important aspect of cinematography. 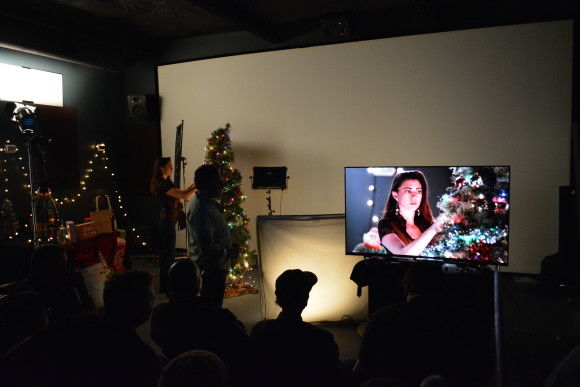 Papert bounces a Tungsten 150w Fresnel to create a soft light on his subject.

Our next VariCam training workshop will take place on Saturday, January 14th, from 9:00 am – 12:00 pm. Details to come soon.

For more information on VariCam, visit our website here.