Anne with an E is a filmed adaptation of the classic coming-of-age 1908 novel, Anne of Green Gables, by Canadian author Lucy Maud Montgomery. The seven-episode Netflix series, created by Breaking Bad writer/producer Moira Walley-Beckett, tells the story of Anne Shirley (played by Amybeth McNulty), a young orphaned girl who is sent to live with aging siblings by mistake. With smarts and a magnetic personality, Anne not only transforms the lives of siblings Marilla (Geraldine James) and Matthew Cuthbert (R.H. Thomson), but the entire town they live in.

The series was shot by cinematographer Bobby Shore, CSC with VariCam 35 cinema cameras. As a teenager growing up in Canada, Shore was a huge fan of director Darren Aronofsky (Black Swan, Requiem for a Dream) and his cinematographer, Matthew Libatique, ASC. While studying film at Concordia University in Montreal, he worked as an extra on the set of Abandon (2002), a feature film shot by Libatique. “When I would read articles in American Cinematographer about movies he [Libatique] was working on, it always seemed like his work came from an emotionally driven place,” reveals Shore. “It was easy for me to latch on to his ideas.” 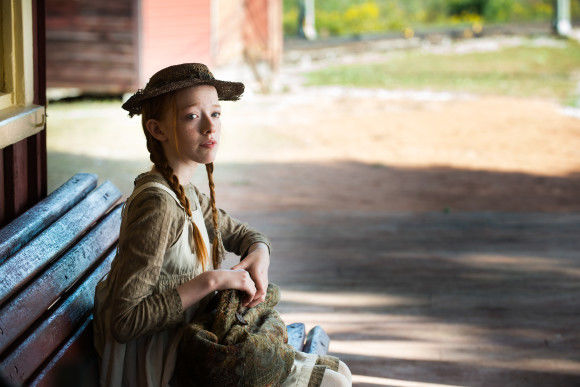 Anne with an E, starring Amybeth McNulty, is an adaptation of the classic coming-of-age 1908 novel, Anne of Green Gables. (Photo: Caitlin Cronenberg/Netflix)

On the advice of Libatique, Shore went on to study cinematography at the American Film Institutein Los Angeles. Before graduating, he worked on a TV series for the Independent Film Channel, which led to a relationship with director Michael Dowse, who soon hired Shore to shoot indie feature Fubar, as well as a hockey sports comedy, Goon. “I worked on a lot of comedies, which was interesting because I never wanted to be a comedy DP – I was more attracted to dramatic or character driven stories,” explains Shore. “But this was the path forward and I had a great time doing it.”

Shore landed the job for Anne with an E based on an interview for another project with executive producer Miranda de Pencier. “While we were talking about her feature, she told me about developing a re-imagining of Anne of Green Gables,” explains Shore, who admits he never read the book, nor watched any of the filmed adaptations. “We just started throwing out references on how you could do it in a more interesting way and all our references turned out to be the same. It was mainly about approaching the story in a much grittier, almost [cinema] vérité kind of way, as opposed to something too clean or Merchant Ivory like.” 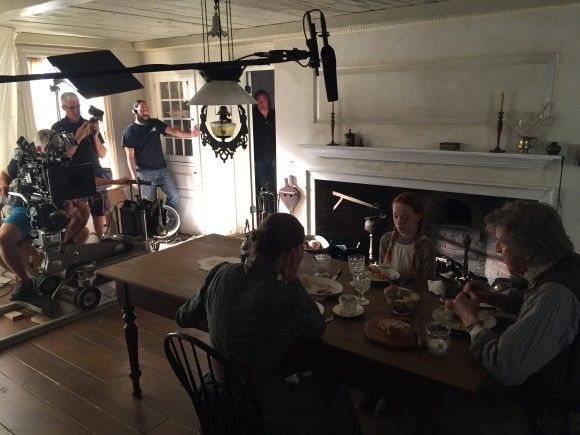 Anne with an E was captured in UHD at 23.98-fps and was generally a two-camera shoot unless they were shooting a big scene with stunts. [Photo courtesy of Netflix]

Shore had a brief meeting to go over the script with Walley-Becket and pilot director Niki Caro (Whale Rider, North Country), who both hired him during the first meeting. “I’ve been watching Niki’s movies since I was in film school,” reveals Shore. “From my point of view, the idea of working with two people who were at a level far beyond where I was at was very enticing.” Shore used a few visual references in developing the look of the series, including Andrea Arnold’s Wuthering Heights, Jane Campion’s The Piano and Bright Star, and Cary Fukunaga’s Jane Eyre. He also was influenced by the photography of Sally Mann in how she captures landscapes.

Shore’s biggest challenge was figuring out the best way to capture a unique perspective since it’s entirely from young Anne’s point of view. “You need to figure out a way how to visually represent her particular view of the world,” says Shore. “A lot of it was talking to Niki and Moira, and developing techniques that would help enhance the story. If it’s not handled properly, you end up doing the story a disservice.” 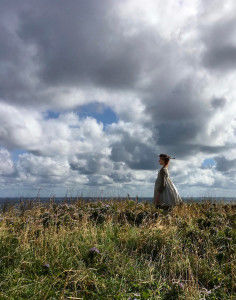 During prep, Shore knew he would have to shoot in 4K because of Netflix’s 4K mandate. He also didn’t have time to perform extensive testing. Luckily a DP friend in Toronto had recently completed a series of tests on [ARRI] Alexa, RED, VariCam 35, Sony F55, and F65, and he shared his footage with Shore. “It was everything I would have tested – candle light, an actor standing against a window with sheers on it – all the elements you’re going to be confronted with when shooting a period piece,” says Shore. “Out of all the cameras, the VariCam felt the closest to the Alexa in terms of dynamic range and color, which was my main point of reference since I know it so well.”

Anne with an E was captured in UHD (3840 x 2160) at 23.98-fps with VariCam 35 cameras. According to Shore, it was a two-camera shoot but they would occasionally bring in a third camera if it was a big scene with stunts. “There were a lot of scenes that would be played out on long lens oners,” says Shore, “or with a camera that pans back and forth between people. On some of the traditional overs, the focus would be on the person in the foreground and not the person talking. We took more chances with the way the show looked and felt.”

Because of the large amount of footage they were capturing, Shore decided to capture 12-bit 4:4:4 AVC Intra files in V-Log instead of RAW. Due to the short prep time, Shore had difficulty at first in finding an appropriate LUT for his V-Log footage. “I don’t like anything Rec 709 related – it’s way too contrasty and colorful,” explains Shore. “I was basically trying to come up with a lower contrast LUT that still looked good. I was at Panavision setting up the camera and a DIT friend of mine who was prepping (xXx: Return of Xander Cage) had a bunch of VariCam LUTs on him that he had been developing,” explains Shore. “He gave me one particular LUT and it looked just perfect. It had nice low contrast where the white level was subdued and the black level was lifted – a softer look. That’s what we used for the entire shoot.” 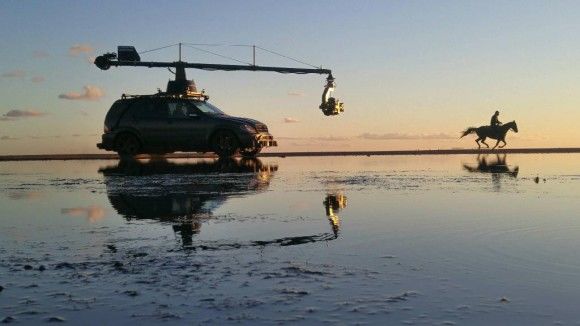 One piece of gear that Shore made great use of was the Panavision Panaflasher. In cinematography, flashing is exposing film, or a digital sensor, to uniform light before exposure, giving you more shadow details. “Panavision came up with a Panaflasher 2.0, which is a 6×6 glass filter with LED lights around it,” explains Shore. “You can basically create a wash of light that the lens shoots through to contaminate the shadows a bit. By using it, it lifted the noise floor of the sensor and gave more texture to the image. I really liked the way it felt.”

Shore felt that the lighting had to feel naturalistic because “the minute you start feeling the artifice of lighting, that’s when you lose the audience.” One big challenge on stage was that production built hard ceilings and no wild walls so it had to be lit like a location. “The blue you get from a sky, or the warm light you get from the sun bouncing off the ground, that’s what we ended up doing on the soundstage,” says Shore. “We used a lot of HMI and Tungsten lighting intentionally so we would have these drastic kinds of changes in color temperature where the background of one room would be completely blue, but the foreground of one room would be very warm and orange. We would mix it up like that and it looked great.” 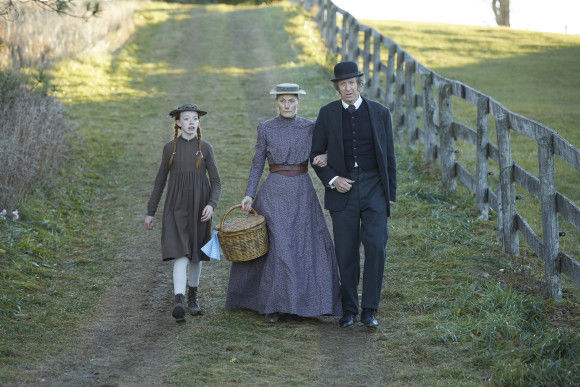 Shore felt that the lighting had to feel naturalistic because “the minute you start feeling the artifice of lighting, that’s when you lose the audience.” [Photo by Ken Woroner/Netflix]

Although there were many scenes shot in candlelight, Shore almost never used VariCam’s native 5,000 ISO, except for a shot on a moving train going through the woods. “For the most part, there’s so much light everywhere and lenses are pretty fast,” explains Shore. “In my opinion, things usually look better underexposed. When someone is sitting next to a candle on a table, the face is going to be a little soft and dark, and that’s just what it should look like.”

Shore used a variety of Panavision standard speed and super speed lenses from the 1960s to the late ‘70s. “I wanted older lenses that didn’t resolve well with weird chromatic aberrations when you open them up all the way,” explains Shore. “I wanted to show how this precocious young girl sees the world, so having these unique characteristics that the lenses provided was something that would enhance her unique point of view.”

Anne with an E was posted at Technicolor in Toronto where Shore worked with colorist Jim Fleming. “Once we figured how V-Log responded to highlights, midtones, and shadows, compared with ARRI Log C, I was extraordinarily pleased with the way everything looked,” says Shore. “It’s like learning a new film stock – you do the work to best achieve the look you’re going for with the tools you have. That takes practice and experience. After shooting with the camera for six months, I’m confident I can go into any project knowing how to make it look exactly the way I want.”

Watch the official trailer for Anne with an E

To watch Anne with an E, visit www.netflix.com. (You will need a Netflix subscription to view the series.)