Creating a western on a small budget in 2017 is no easy feat. Shot with the AU-EVA1, Near to Superstition is a supernatural western that tells the story of two treasure hunters, Saylor (Darren Bailey) and Hunter (Christopher Stein), who have discovered gold in a remote mountain cave.  On their hike back to civilization, Saylor collapses from the heat and is denied water from Hunter, who abandons him in the desert. Continuing the journey, Hunter encounters four mysterious women near the town of Superstition where he meets his fate. 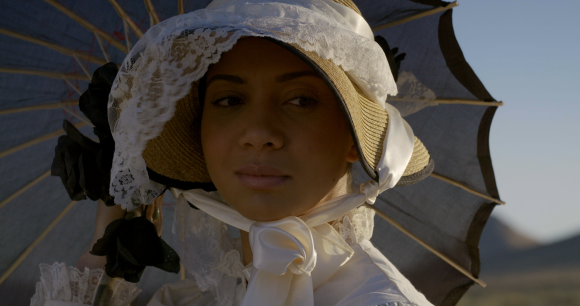 The short film was written, directed, and shot by Elle Schneider. A filmmaker for over a dozen years, Schneider moved out to Los Angeles to study film at USC. “When [Cinema Product Manager] Mitch [Gross] from Panasonic was looking for filmmakers who would be a good fit for testing the EVA1, he asked me if I would be interested. I took a look at the EVA1 prototype at Cine Gear (2017) and while it was a non-working model, I was very excited about the possibilities for how I could incorporate it into my own workflow, especially since the camera is lightweight and very ergonomic.”

When trying to come up with a project to test out the EVA1, Schneider remembered that one of her favorite short films she made was shot on the Panasonic AG-DVX100. “It was a short western so I wanted to be able to compare the two cameras, along with the experience,” reveals Schneider. “I wrote Near to Superstition with several different elements in mind to see how I could test the camera and put it in different lighting conditions, weather, terrain, electricity, and more.” 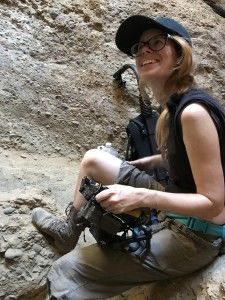 Near To Superstition director/DP Elle Schneider

According to Schneider, creating visuals for a western is difficult because there’s already an established look. “I tried to create visuals that were in-between a modern and classic western look,” explains Schneider. “Near to Superstition has more of a sepia tone – more of a brownness that you might find in something like Shane (1953). I also went with some brighter costumes, especially for the female characters, which are more reminiscent of something more modern like [filmmaker] Kelly Reichardt’s Meek’s Cutoff (2010).”

Shooting in late August in Death Valley, or Palm Springs, Schneider knew she would be facing 110-degree heat. “I looked around Mojave and I found some cool spaces out there, including this great location called Ultimate Graveyard, which is where we shot the bulk of the film,” says Schneider. “I had this idea to have a cave scene at the beginning of the film and luckily there is a cave in our backyard in West Hills, CA. I worked with the park service to permit the location, which is only about a half hour drive outside of the city of LA. It was really cool that something as visually stunning as that was so close to where everyone in the production was based.”

Shooting with the EVA1, Schneider captured 4K DCI (4096 x 2160) files at 23.98-fps, using the EVA1’s 10-bit 4:2:2 Long GOP (150-Mbps) codec. She also captured and monitored her footage in V-Log since they were working in high contrast lighting situations for most of the shoot. “We really wanted to see what details we were getting because Rec 709 would really crush the blacks in the cave, or by the fire light where we really had harsh blacks in the background,” says Schneider. 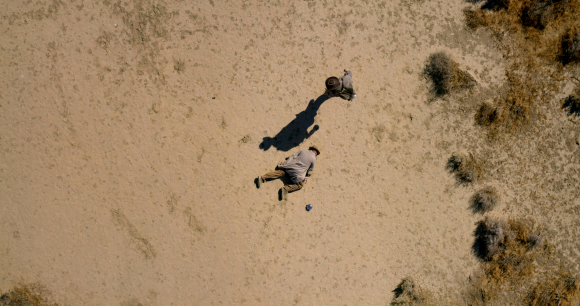 Another visual feature that separates the look of Near to Superstition from traditional westerns is the use of high angle shots captured by drones, as well as smooth moving shots on rough terrain. DJI was instrumental in creating unique visuals for the compact EVA1 by lending us both the M600 Pro drone and the Ronin 2 handheld gimbal. “Our drone team, Strato Aerial Productions, did incredible work for the top down shots,” says Schneider. “Also, having the Ronin 2 on set was invaluable because when we were climbing up into the cave, it wasn’t conducive to have sticks because of the terrain. A handheld rig gives you a ‘Jack Bauer’ or ‘Paul Greengrass’ shaky look and we wanted to have majestic and smooth shots with just a little bit of motion in our cave location. The Ronin 2 allowed us to get those shots.”

Working in extreme brightness and darkness, Schneider employed both native 800 and 2,500 ISOs. “It was a really great shoot for that because half of what we were doing was bright daylight stuff and the other half was middle of the night with mostly natural lighting,” explains Schneider. “This would have normally been a challenge but being able to shoot native 2,500 ISO really helped us out, particularly with the fire scenes. We were also able to control depth of field by using a higher ISO to create really beautiful shots that would have been difficult to accomplish without it.” 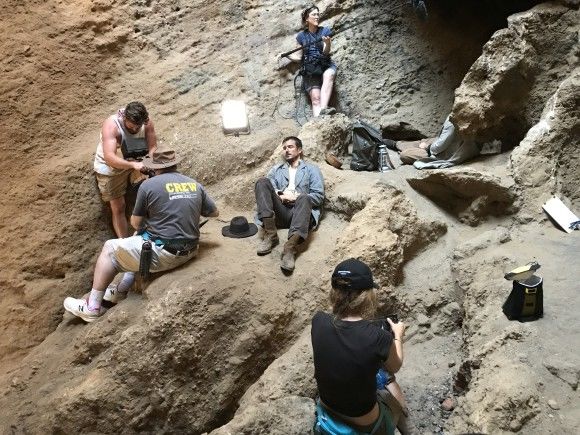 Schneider (baseball cap) and crew on location in a cave in West Hills, CA.

Schneider shot most of the film with Sigma Cinema prime lenses, staying primarily on an 85mm T1.5. She also employed Zeiss Otus lenses for a couple of pickups. “On the drone, we had to use lighter lenses so heavy cinema primes, though great glass, weren’t something that would allow us to balance the drone as needed. We used Leica lenses for our drone shots and they all seemed to match seamlessly.

Color grading was performed at Technicolor in Hollywood by colorist Alexander Schwab, who graded Near to Superstition’s V-Log files on DaVinci Resolve 12.5. According to Schwab, even with the harsh daylight scenes in the desert, the V-Log files held up in the bright highlights. “The camera is punching above its weight class,” he says. “We really didn’t run into any issues, except for a few shots where we had to lift the blacks in extreme low light scenes.”

Behind the scenes on Near To Superstition

Schwab also graded a few scenes from Near to Superstition in HDR. “We were using the Panasonic EZ1000 [HDR OLED] displays,” explains Schwab, “and I thought the shots looked exceptional. We’re in such an early stage of what HDR can be. There’s a lot of trial by error of what workflows and techniques work best for HDR color grading. You really have to rethink your tool set a bit, as well as re-examine the way you approach material in HDR.”

“One thing that really intrigued me about the EVA1 camera was the ability to use it both in a professional setting and in a more run-and-gun, docu-style setting,” concludes Schneider. “It was interesting to shoot with a full crew with all of the I’s dotted and T’s crossed for most of the shoot, and then go back and do a few pick-ups where it was basically me, a couple of actors, and the camera. Being able to hook my lav mics up to the camera, take it out to the park, shoot some pick-ups, that was a really great feeling knowing that I could come back and put those two shoots together and have them match seamlessly and look professional.”

Near To Superstition final cut

For more information on the AU-EVA1, visit business.panasonic.com/AU-EVA1.html.