At Cine Gear Expo 2017 in Hollywood, Panasonic previewed the AU-EVA1 cinema camera. Equipped with a newly designed 5.7K Super-35 sensor and positioned between the Panasonic Lumix GH5 4K mirrorless camera and the VariCam LT 4K cinema camera, the EVA1 generated tremendous buzz since being teased at NAB 2017. Compact and lightweight, the AU-EVA1 is tailor-made for handheld shooting, but also well suited for documentaries, commercials, and music videos. 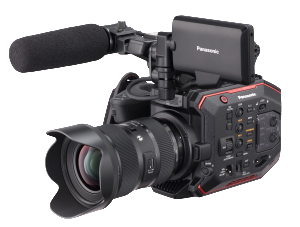 Question: For whom is the EVA1 designed?

MITCH GROSS: Depending on the type of work you do, EVA1 answers a lot of different needs. It is designed to be a versatile machine that you can plug into a lot of different situations. There are people who have been shooting on smaller cameras such as DSLRs or all-in-one camcorders, and they have felt limitations. At the same time, you have other people who have been shooting on large production cameras and they sometimes have need for a camera that is slimmed down and more portable. What we wanted to do was build a camera that could sit in-between those spaces where you could essentially rise up from the small cameras where you want more versatility and you don’t have to fight the machine sometimes. Or you could slim down from a bigger camera for projects where a larger system may be too difficult to deal with or simply too expensive for the production. On the little cameras, you can get amazing work out of these tiny machines but because they’re so small, dealing with the controls can become a barrier and you often must devise workarounds. Shooters put up with the workarounds because these small cameras are so convenient to shoot with. We’ve risen the scale of the camera so now you have these high-end features and easier access to controls in a camera that is a more functional size for most shooters. For users of higher level production machines, we’ve tried to be judicious in keeping as much professional functionality as possible into a compact form factor. 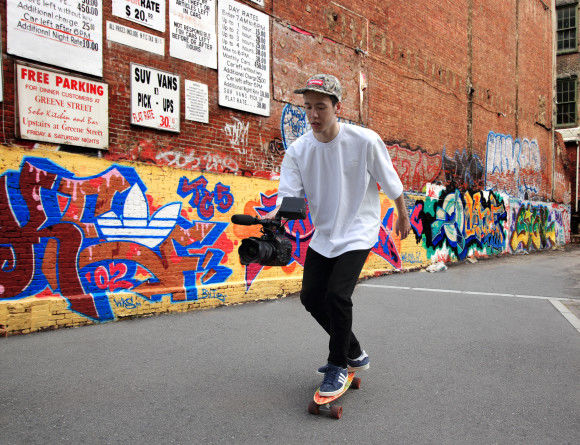 The EVA1 is small enough for comfortable handheld shooting with professional functionality.

Question: What will be the main shooting applications for EVA1?

MITCH GROSS: I think you’re going to see a lot of people shooting documentary style work with the EVA1 – talking head interviews and B-roll shots in the field. It’s very convenient for that style of shooting. You’re also going to have people who do news shooting, as well as live event type work such as weddings and sports videography. In addition, there will be people who will want to rig the camera for specific types of remote work, meaning mounting the camera out on a crane, or jib arm. You want it fully featured yet small and lightweight because the bigger your camera is, the bigger crane you would have to use, just like on a Steadicam. Gimbal devices like a [Freefly Systems] MōVI or a [DJI] Ronin want a fully featured camera but in a small and lightweight package. With EVA1, you get the dual advantage of having great capabilities while being lightweight and small. Same goes for underwater housings, car rigs, or anytime you need to place a camera somewhere where you want a slimmed down unit that won’t get in the way. You still want to have a capable camera, especially with a Super-35 sensor, and the EVA1 provides just that. 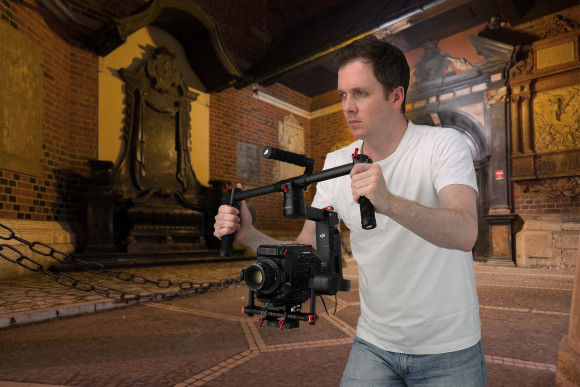 Gimbal devices want a fully featured camera but in a small and lightweight package.

Question: What are some of the specific features EVA1 gives you that a compact DSLR or mirrorless camera won’t?

MITCH GROSS: The first thing is that people who are shooting with a [Panasonic Lumix] GH5, is that they are shooting with a Micro Four Thirds sensor and EVA1 contains a Super-35 sensor, which gives you a different look and feel. The larger body size of the camera, the design of the interface, and where the LCD is located all give you better access to the controls to make adjustments while rolling. With small DSLR cameras, you can’t comfortably change things as you’re rolling in a run-and-gun style and that’s a problem – you need to be able to adjust on the fly.

In addition, we have proper connectors – real XLR audio inputs, full-size HDMI and locking SDI connectors for video outputs. We have a full-fledged camera that’s designed for video production. It has a removeable side hand grip with integrated controls. The EVA1 is designed to be held up to your shoulder as opposed to way out in front of you, or at your waist. Another example of control you have while shooting video are the integrated ND filters. You have a filter wheel that is built into the camera so you can adjust exposure as you roll – you don’t have to stop and screw on a filter in front of the lens. The overall design of the EVA1 is to make it more comfortable for video production, as opposed to a stills camera that is doing double duty as a video camera. 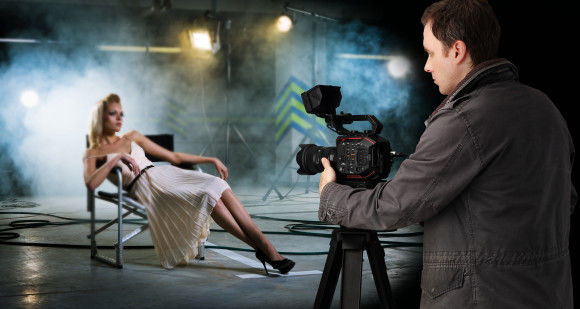 The EVA1 was designed for video production, as opposed to a stills camera that is doing double duty as a video camera

Question: For a cinematographer that has never shot with a VariCam before, can you explain the Dual Native ISO feature?

MITCH GROSS: Panasonic developed a process to read the sensor’s photosites in a fundamentally different way than it’s traditionally done. More information can be extracted without degrading the image. That effectively gives the imager greater sensitivity and separates the signal from the background noise. It’s essentially a different way of reading the camera sensor and it gives it two different native ISOs or sensitivities. Whereas in all others cameras, you just dial the gain up to get more sensitivity but you get a lot of noise in the image. You can also do that on the EVA1, but if you just switch between the two native ISOs, they’ll look the same as far as the amount of noise. There are two ways that one might likely want to use this. First, you can shoot with zoom lenses when normally you would have to shoot with primes because zoom lenses generally aren’t as fast. Instead of having to switch prime lenses, you have more versatility while still getting the right exposure. Another way of using Dual Native ISO is the ability to lower your light levels. In shooting with lower light levels, you will save money, time, and you can shoot with more practical lights in your surroundings. That can be for a high-end production or a more modest production where it can be used for savings, or a stylistic choice. 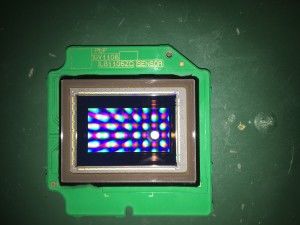 MITCH GROSS: There are three things. When you start with one resolution and you go to a lower resolution, it always improves the resolving power of the final image. When you start with more and get to less, more information comes through. The result is a more finely detailed image. That can be true when you go from a 5.7K sensor to 4K, UHD, 2K, HD, or 720p – all of which are going to be available on EVA1. Second, there’s more color information. At 5.7K resolution, you have more individual examples of red, green, and blue information – all of which enrich the resulting image in whatever resolution you choose to record. Third, in a future firmware update, there will be an option for a RAW data output from the camera to a separate recorder and that will be available with the full 5.7K resolution. All that data will be made available, which can be used in post in various ways, whether it’s reframing or gathering extra information to manipulate the image. More is more and it gives you greater choices in what you might do with it in the future. 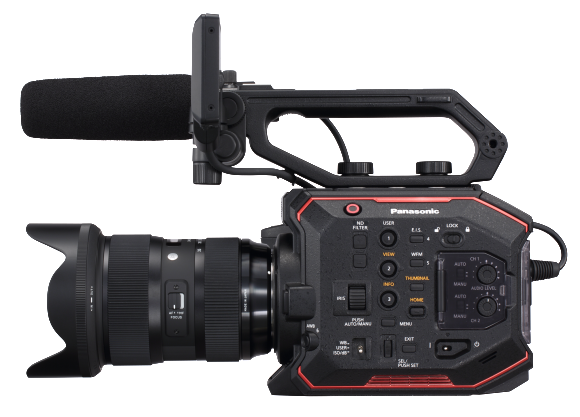 Question: What kind of media will the EVA1 use?

MITCH GROSS: Part of the design ethos of the camera was to not only make the camera itself affordable but it had to be affordable to use. The EVA1 uses SD cards to record footage and it can record in various codecs, including 4K 10-bit 422 to fast SDXC cards. The cards are readily available everywhere in the world so if you’re a documentary shooter in a remote location, you can purchase more cards and stick them in the sides of most laptop computers, or pick up an adaptor at any electronics store. The usability of the camera is high and the expense is kept at a minimum. Depending on the selected format we require cards that can do certain read and write speeds and all that information will be made available when the camera ships.