Broadcasting a Total Eclipse of the Sun 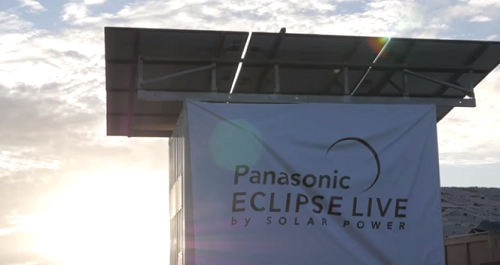 As Indonesia and parts of the Central Pacific plunged into darkness during a rare total solar eclipse on the morning of March 9, Panasonic broadcast live the approximately 4-minute-long phenomenon from Ternate, an island in eastern Indonesia, using its Power Supply Container, a stand-alone photovoltaic solar power package, as the only power source.

To enable live filming and broadcast from the Indonesian island, Panasonic transported the Power Supply Container from the Indonesian capital of Jakarta to Ternate. Some 12 Panasonic HIT® solar modules with high conversion efficiency generated approximately 3kW of electricity by tapping renewable energy from the top of the container, and stored the power in 24 built-in lead-acid storage batteries. The stored energy was supplied to a Panasonic LUMIX GH4 camera attached to a telescopic lens to capture the spectacular moment. Mobile computers, production and editing equipment, internet connection and other supporting technology were powered by solar energy.

This is third time Panasonic broadcast a solar eclipse.

The next total solar eclipse in the U.S. occurs August 21, 2017, and will be visible in the Northwest, Central Plains and Southeast.