The 2010s saw exponential growth of solar-powered homes in the US. This report from Fast Company shows us which cities these homes are located in.

There’s now 40 times as much solar power generation in the U.S. as there was a decade ago – enough, by last year, to power more than nine million homes. Most of this is on large solar farms, but nearly a third is on rooftops. A new report takes a look at where solar panels are most common on roofs, using AI to analyze aerial photos of cities.

Cape Analytics, a company that uses machine learning to analyze geospatial data for insurance companies, scanned 38 million properties in 21 large metropolitan areas. The San Diego area, by far, has the most solar panels per capita, with around 10% of homes generating solar power. In a neighborhood called La Costa Ridge in the nearby city of Carlsbad, nearly a third of houses have solar on the roof. 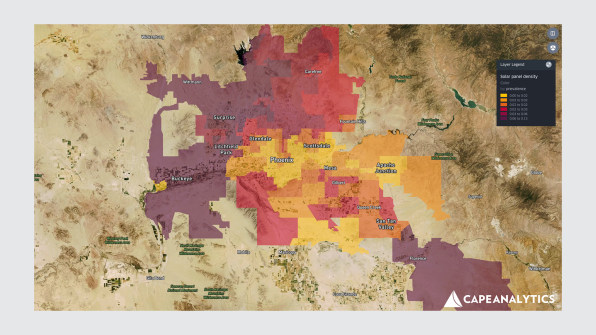 Nearly all of the top 100 cities for solar power are in California, not just because the state is sunny – Atlanta and Phoenix both have fewer panels that would be expected based on sun alone – but because of policy, including incentives like credits from utilities for extra power that is produced and property tax exemptions. While wealthier homeowners are more likely to get solar panels, the state also invests in programs that help low-income households install solar.

By next year, all new homes in the state will be required to have solar panels (some have argued that this isn’t the most cost-effective way to add new renewable energy, though those with solar power and batteries in the current blackouts are glad to have their own power sources). On the list of large metropolitan areas with the most solar, five California cities top the list, followed by Phoenix, Tampa Bay, Denver, Miami, and New York City.

There’s room for far more growth. A 2018 Credit Suisse analysis predicts that residential solar could grow more than three times by 2025. Plenty of space exists on rooftops. Even in California, perhaps only 6% of homes have solar panels now. All solar power in the country now, including giant solar farms, still only adds up to 2.7% of total electrical output. A 2016 report from the U.S. Department of Energy’s National Renewable Energy Laboratories found that solar panels installed on rooftops alone could provide as much as 39% of the country’s electricity.

This article was written by Adele Peters from Co. Exist and was legally licensed through the NewsCred publisher network. Please direct all licensing questions to [email protected].