My EV, Your PV — Or The Other Way Around?

My EV, Your PV — Or The Other Way Around?

eBay offers an exchange where people can buy and sell used goods. A new microgrid model fueled by EVs and solar buildings may soon allow us to produce, share and trade energy. Learn how innovation in sustainability could drive peer-to-peer energy transactions for maximum efficiency and cost savings...

Will future solar homes and EV (electric vehicle) owners be able to tango?

With so many solar homes and an increasing number of EVs, it is easy to connect the dots leading to new and potentially profitable business models. One such idea was recently outlined by Vincent Schachter, Sr. VP of energy services of eMotorWerks, in an interview with Microgrid Knowledge—which was reprinted in other media. The basic concept is that EVs, buildings with rooftop solar PV, and/or distributed storage and smallish microgrids will be key market actors in a future where consumers produce, share, or trade energy, also referred to as peer-to-peer (P2P) trading.

It is not hard to imagine a future where an EV driver could pull up to a small microgrid consisting of one or more connected solar homes, plugin, and "trade" with the energy sellers within—say, homes or buildings that have rooftop solar PV. Or the EV could discharge some of its excess juice to homeowners on a cloudy day.

As described in the Microgrid Knowledge article, eMotorWerks and LO3 Energy have joined forces to demonstrate that such a future is feasible. The two companies announced a collaboration in mid-Dec. 2018 to test systems and software that will let consumers buy and sell electricity within microgrids using their solar homes and EVs without an intermediary or a central clearinghouse. The partners want to test the feasibility and efficiency of an energy ecosystem where EVs don't just charge, but also discharge, and where future prosumers can better control their energy generation, consumption, and storage. The companies said they may test their ideas in New York's famous Brooklyn Microgrid project, where LO3 Energy has already successfully demonstrated a community blockchain scheme. If all goes according to plan, they hope to develop a trading platform that could be applied to other microgrids and other applications worldwide.

While the basics are simple, the scheme quickly gets complicated. To make it work, the microgrid will integrate eMotorWerks JuiceNet EV charging platform into Exergy, LO3's transactive energy system. The idea is to allow participants to bid prices for buying or selling electricity similar to how traders currently do in competitive wholesale power markets but on a minuscule scale, with solar households and EV owners as traders. Crucially, the idea is to make this possible without a central clearinghouse or an intermediary using a blockchain ledger.

According to Schachter, "This is where the industry's headed … (being) able to leverage EV batteries and flexible resources locally," as explained in his interview with Microgrid Knowledge.

In practice, the EV driver could transact with the small-scale microgrid in a variety of ways. The EV owner can leverage the flexibility inherent in storage capacity of its battery while the PV households can gain an additional source of revenue for the rooftop solar, especially during sunny days where there is generation exceeding demand on the distribution network.

Who buys or sells what will depend on circumstances, timing, price, location, and congestion on the distribution network. On a cloudy day, for example, the homeowners in the microgrid may be willing to buy energy from the EV. On a sunny day, when the households have excess solar energy, they may offer the EV owner low-cost juice for charging the batteries.

The buyers and sellers would agree on the price for such transactions. This is precisely the idea vouched by the likes of Edward Cazalet, who described it in a book titled Transactive Energy along with Stephen Barrager. For example, a household might offer to buy energy if it falls below a threshold price. Or the EV owner may say you can use my battery all night, so long as it is fully charged by 9 am when I leave for work and need the EV's full range for the morning commute.

In practice, of course, the communication and the transactions will be automated and algorithm-driven preset by the buyers and sellers using something like eMotorwerks' JuiceNet smartphone application. In other words, the traders would hardly, if ever, be communicating or bidding in real time. Artificial intelligence (AI) and machine learning (ML) will figure out when to buy or sell and at what price based on behavior patterns, service needs, and other parameters set by the traders in the scheme, observed, learned, and improved over time.

The proposed scheme could mark the next step in the LO3 Energy's Brooklyn Microgrid business evolution, as it demonstrates its platform operating on the microgrid level and/or in new applications.

In an article by Utility Dive LO3 Energy's CEO Lawrence Orsini said utilities should see EV charging as another option to "efficiently match local energy supply and demand," adding, that the partnership with eMotorWerks could help to enable "more transactions among other microgrid participants and EV drivers."

In the Microgrid Knowledge interview, Schachter said, "It's in our DNA to try to optimize the energy related to charging and then to deliver whichever services we can deliver in a given geography that make sense for our customers and partners."

The two companies have decided to collaborate after realizing that their products complement one another, according to Schachter. In the microgrid, LO3 Energy will provide the financial platform that manages the price signals and peer-to-peer (P2P) transactions while handling energy transactions within the microgrid and between the microgrid and the central grid. Using LO3's mobile app, consumers can decide what they're willing to pay for local energy produced. As in any competitive platform or auction, the supply and demand are matched in real time and highest bid required to clear the market sets the price as in any competitive wholesale market.

In the meantime, eMotorWerks JuiceNet allows control over the flow of energy. It aggregates supply and demand and makes matches in real time using a cloud-based platform. "We've been on that wave of aggregating demand response with EV batteries for the last couple of years in California. But this is an evolution from the status quo – the ability to do it and then to trade," Schachter said. 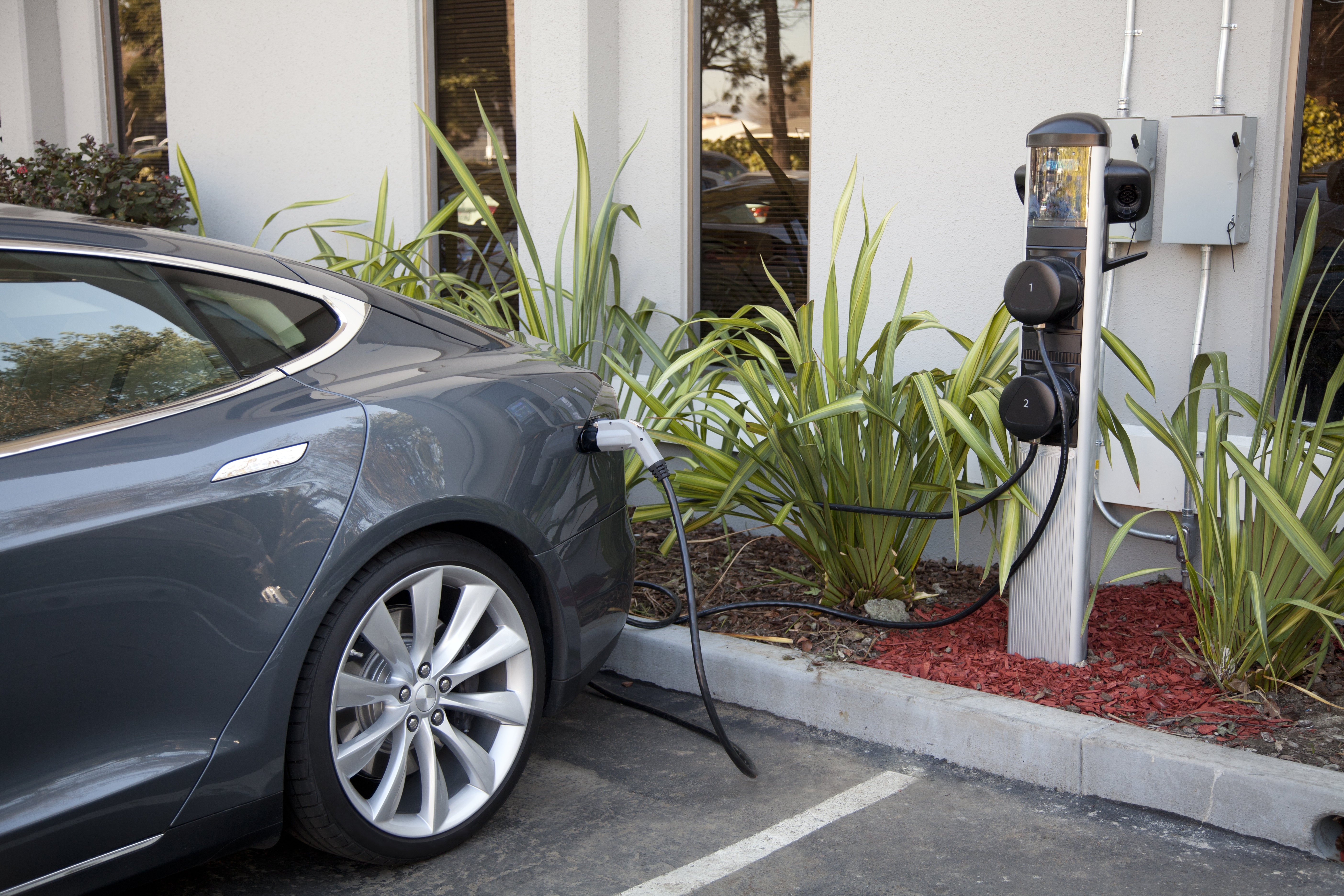 The answer depends on the timing and location of EVs, when they are charged, or potentially discharged. It is easy to imagine a scenario where large numbers of EV owners arrive at home, or work, at more or less the same time and simultaneously plug in to charge. Under these circumstances, energy management becomes "all about space and time," Schachter said, adding, "It becomes important to monitor, track and control the movement of energy in a granular manner, something the trading platform can do," he said in the interview.

The two companies expect to have demonstration results to show in a year once they work through the logistical details. The scheme offers a lot of potential, which explains why eMotorWerks was acquired by Enel. The company made headlines in September 2018 with a 30 MW virtual battery, made up of 6,000 EV chargers that it had aggregated for participation in California's wholesale power markets, as reported in the Nov 2018 issue of this newsletter.

There is a lot at stake. Bloomberg New Energy Finance (BNEF), for example, believes EVs may represent as much as 28% of global light-duty vehicle sales sometime shortly after 2025. And the Edison Electric Institute, which represents US investor-owned utilities, projects 7 million EVs will be on US roads by 2025 – up from about 1 million today. With so many EVs expected and millions of solar roofs already in place, finding better ways to get power-hungry EVs and PVs with surplus energy during sunny hours of the day to trade locally becomes a big plus.

There is also a lot of debate about how big an impact EVs may have on electricity sales over time. Morningstar, for example, expects demand from EVs to make up 1.7% of US electricity demand by the end of the next decade. Data centers are the other potentially big driver of sales. But much of this growth may be offset by the increased efficiency of everything else that uses electricity, notably more efficient motors, lighting, and more efficient buildings.

This article was written by Guest contributor from CleanTechnica and was legally licensed through the NewsCred publisher network. Please direct all licensing questions to [email protected]