The new reality in energy is: 'if you don't use it, you won't lose it'. And it's driving change across the clean energy space. With the rise in popularity of solar panels and other renewable technology such as energy storage, the reverberating effects are felt far and wide. This mind-stretching article from the National Law Review looks deep into the fast-changing world of sustainable energy and battery storage.

A major disruption to the global economy is coming in the form of a seismic shift in energy markets. Largely driven by energy storage, this disruption will create exciting opportunities for the renewable energy market and will, in our view, drastically change the time of day electricity price curve (that is, the ‘duck curve’).

The increased availability and adoption of battery storage will enable solar energy generators to match for the first time the supply of electricity to the time of customer use, which has historically been the major impediment to the growth of direct renewable electricity supply. In time, the ability for renewable energy to supply generation as needed throughout a 24 hour window has the potential to widen and eventually flatten the electricity price curve, such that the head and the tail will almost be completely “cut off” the duck.

For those wondering if this is an article about the energy market or a recipe for Peking duck, the ‘duck curve’ refers to the graph of the price of electricity across a day, which peaks in the morning (the tail), slumps in the middle of the day (the belly) and peaks again in the early evening (the head). With a bit of creative license this curve resembles a duck – see Figure 1 below. 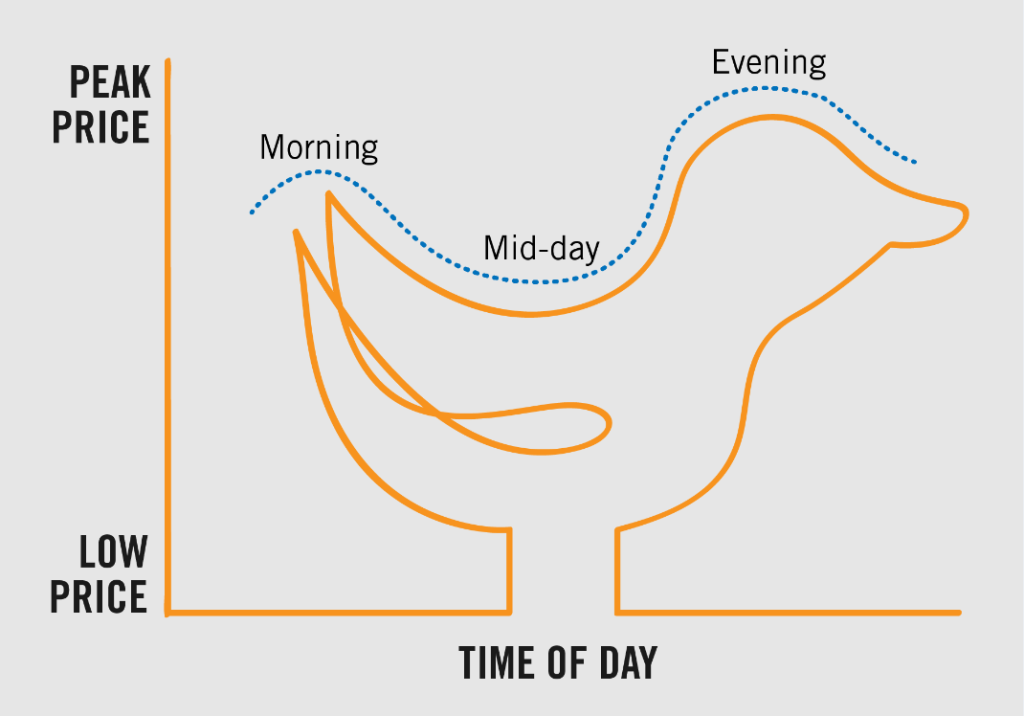 Over the last decade the price of electricity has been falling significantly from mid-morning, bottoming out around 12 noon and then increasing in the early evening. Graphically, this has resulted in the day price energy curve resembling a “fatter” duck, as the duck’s belly has been hanging lower and lower – see Figure 2 below. 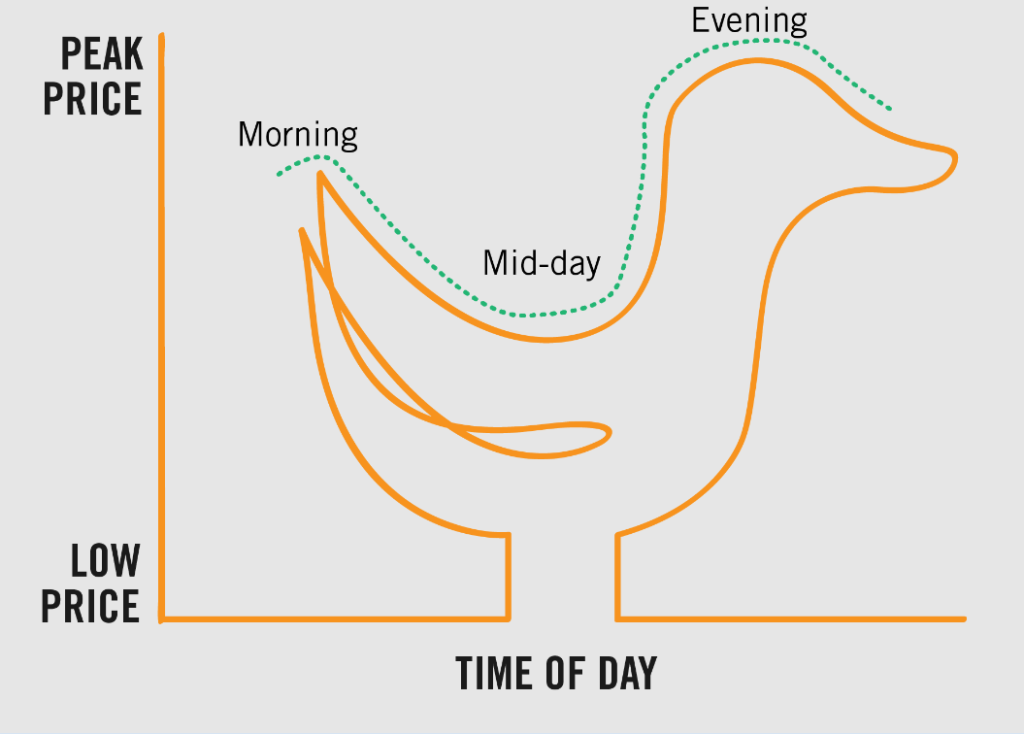 So what is causing this fattening? Mid-day reductions in electricity demand are being driven by the increase in behind the meter solar generation, particularly residential rooftop solar. Macro-economic trends are also reducing commercial and industrial electricity demand as the economy shifts more and more towards a service-based economy from a manufacturing and industrial base.

Meanwhile our lives have become more and more electrified, including through internet usage (data being directly correlated with electricity), the use of electricity for heating and cooling our homes, and the electrification of transportation through the increased adoption of electric vehicles. All of this results in a mismatch between when we need electricity and when it is created.

Battery Storage: The Era of a Fatter, Wider or Even Flat Duck?

Behind the meter battery storage generation is increasing year on year, with continued exponential growth forecast over the next decade and beyond.

In Australia we have been seeing this growth in two key areas.

Both of these trends are resulting in payback periods becoming shorter and shorter.

These trends are not unique to Australia, as similar patterns can be observed in other regions. The combined effect of these trends is that peak morning and evening prices are coming down or “flattening”, such that the head and tail of the duck (representing those peak prices) are falling away. Over time, energy storage has the potential to cause an almost flat electricity price curve – see Figure 3 below.

The Firm Duck: The New Frontier

The ability to balance energy demand and generation resulting from energy storage will allow both electricity price and supply firming like never before.

It is easy to anticipate that this will result in significant changes in the Power Purchase Agreement (PPA) market for derivative or hedge contracts, whose demand and value has blossomed in the market largely due to the dramatic price fluctuation and volatility that has plagued the energy market more generally.

Renewable energy generators who can offer a firm supply of electricity, as a result of being able to store energy and supply electricity not just when the sun is shining or the wind is blowing, will drive the next wave of corporate PPAs.

Energy storage allows generators to supply and customers to purchase green electricity at the time of day and in the quantity the customers require. This opens the renewable energy market to a whole host of new customers with smaller or more stringent power requirements. Examples include hospitals or data centers, which have a need for guaranteed supply and have therefore traditionally required an electricity retailer to “firm” their electricity supply. Large scale energy storage allows customer demand to be matched with generator supply, opening direct contracting of renewable energy to customers who do not have the resources or inclination to manage the timing mismatch between renewable generation and customer electricity demand.

The winners will be the parties that can structure these transactions in a way that efficiently allocates risks to the party most capable of mitigating them, and ultimately make the project investable and bankable. Furthermore, the energy market is likely to see an increased level of innovation and creative economies. This could include, by way of example, an increase in the PPA price to compensate for the increased value created by the flexibility of energy storage, or contracts for ‘peak only’ energy supply. Bespoke contractual structures are being developed to address specific energy customer requirements, with renewable energy generators being forced to meet the requirements of their customers.

The opportunities afforded by battery storage will only grow as the efficiency of energy storage technology improves (that is, as we see a reduction in the amount of electricity lost or consumed in the process of storing and then releasing electricity), and as the capital cost of energy storage inevitably decreases. This will result in more and more energy storage being deployed and will cause a seismic shift in the electricity market.

As the duck curve goes from fat to flat to firm, electricity generators, retailers and consumers alike will need to hold on tight, or risk falling off the curve entirely.

*no ducks were harmed during the writing of this article.

This article was written by K&L Gates from National Law Review and was legally licensed through the NewsCred publisher network. Please direct all licensing questions to legal@newscred.com.

If your goal is to create a truly energy-efficient home, then solar panels are just one part of the sustainability puzzle.
Learn more
Sustainability & Environment

Switching to renewable energy sources and away from fossil fuels is saving the environment in more ways than one.
Learn more
Sustainability & Environment

Green living is no longer just an individual preference. In many cities, policy makers and residents are leading the charge toward environmental friendliness.
Learn more
Homeowner Insights

The 2010s saw exponential growth of solar-powered homes across the US. Which cities have the most solar?
Learn more
Sustainability & Environment

Port of San Diego to install solar-powered microgrid in 2020

California continues to lead the renewable energy wave with a new solar microgrid for one of the nation's largest and busiest ports.
Learn more
Sustainability & Environment

How blockchain technology can be used to empower households to trade their excess rooftop solar power with their neighbors.
Learn more
Trends & Technology

Some states are particularly well-suited to battery storage. In these areas, batteries will ensure you have round-the-clock power even when the grid fails.
Learn more
Homeowner Insights

What Happens to Your Home Solar System During a Storm

Homeowners who have invested in solar panels may find themselves wondering: ‘Will I lose power during a power outage?
Learn more
Trends & Technology

A look at the importance of energy storage on the renewable ecosystem in terms you can understand.
Learn more
Trends & Technology

Imagine a world where all the roofs of all the buildings in all the cities across the world were covered in greenery.
Learn more