Trafalgar Releasing has premiered S&M2, a must-see celebration of the 20th anniversary of Metallica’s groundbreaking S&M (“Symphony and Metallica”) concerts and album recorded with the San Francisco Symphony. The broadcast has been seen in more than 3000 theatres in more than 80 countries.

The concert film was recorded live with the San Francisco Symphony at the city’s new-state-of-the-art Chase Center on September 6th and 8th, with the production deploying Panasonic AW-UE150 4K pan/tilt/zoom cameras on stage for close-ups and specialty shots of the band and symphony musicians. The AW-UE150 produced exceptional 4K video quality and its 75.1-degree horizontal viewing angle, the widest in its class, allowed operators to capture the full shot.

I was excited about the opportunity to integrate the UE150s into the production. We were challenged with an open stage, and the Panasonic cameras let us maintain a low stage presence, but with the flexibility to achieve high-quality, 4K images from multiple angles.
Wayne Isham Director

The upcoming broadcast will include several tracks from the original 1999 S&M album as well as symphonic versions of new songs issued since then. This theatrical release will give millions of international fans the chance to experience the show as a modern-day big screen concert. The production format for the concerts was 2160/23.98p.

Reprising their roles as Producer and Director (of the original 1999 S&M concert film) are Dana Marshall and Wayne Isham.  According to Isham, the iconic director of concert/music videos, “I was excited about the opportunity to integrate the UE150s into the production. We were challenged with an open stage, and the Panasonic cameras let us maintain a low stage presence, but with the flexibility to achieve high-quality, 4K images from multiple angles."

“We used the UE150s for some of our hero shots, and I was impressed with the camera’s lensing, wide angle and superb image capture. I couldn’t have been happier with the results,” he added.

PTZ camera operator Hiram Becker, a veteran operator of Panasonic remote cameras, said that the utilization of the UE150s at the Metallica concerts delivered a compelling immediacy to the finished concert film.

The performance area for the concerts was a revolving stage, with an outer ring where the symphony played, connected to a center ring where the band played and, then, at the inner circle, the drum kit riser. With some small variety of placement between the two performances, the main fixed spots for the AW-UE150s were one camera on the drum riser, the second camera  downstage center on the conductor (but with the ability to spin around for hero shots of band members singing, performing guitar riffs or playing for the camera), and the third on the opposite side of stage, 180 degrees from the conductor, to cover symphony instruments (but, again, with the ability to spin around to capture the band).

It goes without saying that with a band like Metallica we were dealing with heavy metal pulsation, so the UE150’s Optical Image Stabilizer was very useful in dealing with the vibrations of the audio systems.
Hiram Becker PTZ Camera Operator

Reflecting on his initial experience operating the AW-UE150, Becker said, “Control is so much better than with any previous PTZ camera I’ve used. The UE150’s 1-inch sensor is very powerful: we were able to set the picture quality flat enough so that post-production had a lot of space to work with to match the house cameras.”

“It goes without saying that with a band like Metallica we were dealing with heavy metal pulsation, so the UE150’s Optical Image Stabilizer was very useful in dealing with the vibrations of the audio systems,” he added. 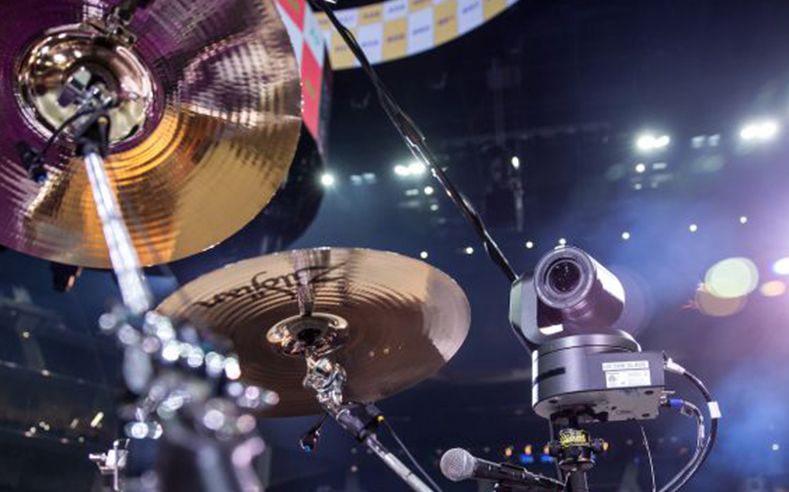 Becker was stationed in a remote truck, working alongside the Technical Director and operating the AW-UE150s cameras with one AW-RP150 controller and one AW-RP50 controller. “I brought along my own RP50 as back-up and because I’m so familiar with it. But the RP150 was like going from good to great: a smoother, 8-point axis; touchscreen control for better, faster changes of the user interface; and instantaneous saving of presets.”

“Having used a variety of PTZs from other manufacturers, there is no comparison to Panasonic models for their ability to ramp into a zoom, creep during a pan, and subtly tilt up on the fly as a performer stands for a solo, and none more so than the UE150,” Becker said.

For more information about the S&M2 concert film, visit https://www.metallica.film/. Ready to integrate the AW-UE150 in your next live concert video production? Reach out to our team of live production specialists to schedule a demo!