St. Mina’s Coptic Orthodox Church of Holmdel, NJ has long considered outreach to the larger community – those unable to attend mass due to age, physical challenges or lack of transportation – a crucial component of its mission. To reach this shut-in community, the church has used a variety of solutions over the past five years to live stream its masses and bible study meetings to its website and YouTube channel. According to Fady Zachary, a congregant who manages St. Mina’s IT and A/V infrastructures with a small team of fellow worshipers, St. Mina’s multiple streaming initiatives have made the church one of the most technologically sophisticated in its region. However, with the recent construction of an entirely new church comprising two separate buildings and three worship spaces, St. Mina’s A/V needs inherently became more sophisticated.

St. Mina’s recently invested in Panasonic’s AV-HLC100 Stream Studio and AW-HN38 Full HD pan/tilt/zoom cameras with built-in Network Device Interface (NDI® PTZ Camera) capability. Zachary said, “Our previous streaming appliance was simply not up to the task of live transmission and playback of previous recordings on both the website and YouTube channel. The HLC100 represents a huge step up for us, providing a switcher, streaming encoder and camera control all in one box, where formerly we needed three separate pieces of equipment. It’s another significant improvement that, with multiple audio inputs, the HLC100 enables audio to follow the video stream we’re pulling from.” 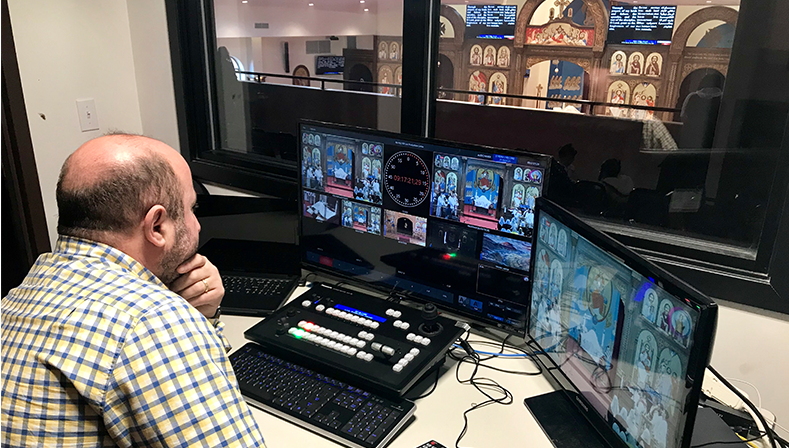 The AV-HLC100 is an all-in-one professional live streaming solution that includes an integrated PTZ camera controller, built-in audio mixer, titler, clips/stills player, multi-destination stream encoder, and much more in a single device. Supported network protocols include NDI and RTMP (for direct transmission to live streaming services such as YouTube Live).

Because the HLC100 is built on a PC platform, we are able to access it remotely. Through its Easy IP function, the HLC100’s connection and settings are easily executed – I am literally able to participate in a Sunday Mass and, from my pew, control the Stream Studio via my iPhone or iPad.
Fady Zachary Congregant / Volunteer Technical Director

At a minimum, the church live streams three weekend Masses and three weekly Bible study meetings, utilizing the AV-HLC100 approximately 25 hours per week. “Because the HLC100 is built on a PC platform, we are able to access it remotely,” Zachary noted. “Through its Easy IP function, the HLC100’s connection and settings are easily executed – I am literally able to participate in a Sunday Mass and, from my pew, control the Stream Studio via my iPhone or iPad.” 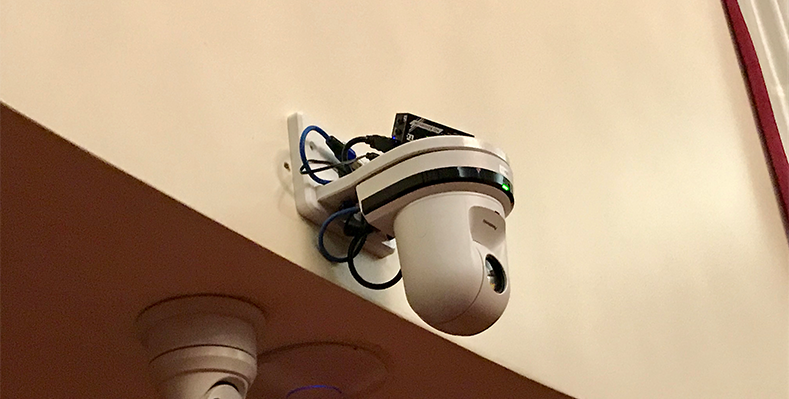 The AV-HLC100 Stream Studio works directly with Panasonic PTZ and systems cameras, discovering and deploying them automatically using IP video transport and working with all NDI and NDI|HX capable video sources, including the AW-HN38 integrated PTZ. For its camera needs, the church chose the HN38 PTZ solely on the basis of its seamless compatibility with the AV-HLC100 and its built-in NDI support. “It’s a tremendous efficiency being able to control everything over a single Ethernet cable,” Zachary said.

Two AW-HN38 PTZs are installed in St. Mina’s largest chapel (accommodating 700) and the third camera in the second chapel (accommodating 300). The AV-HLC100 is situated in a small control room located in the balcony overlooking the main chapel. The church’s production format is 1080p/30fps. 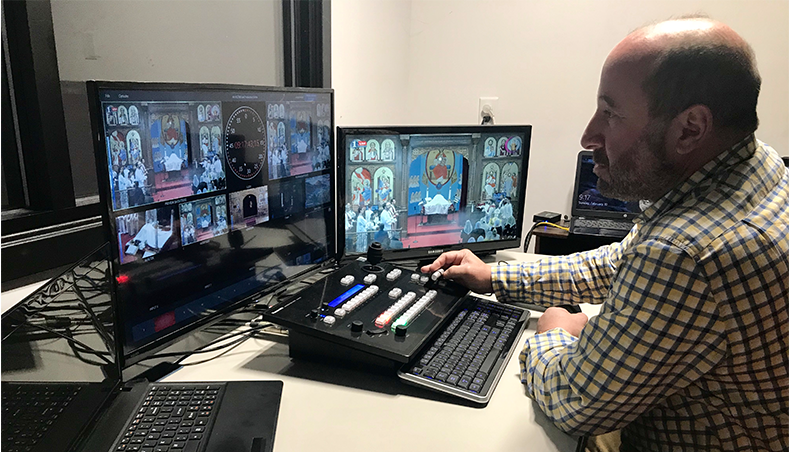 Zachary said St. Mina’s larger church community has come to depend on streaming to the extent that participation in services can increase by up to 20% with these broadcasts.

“We are very satisfied with the HLC100’s and PTZs’ performance, and the professional support from Panasonic. We have plans to add more cameras in the near future, and capitalize more on our collaboration with Panasonic,” he added.

For more information about St. Mina, visit stminas.org and/or YouTube channel youtube.com/user/saintminaholmdel. Ready to equip your church for livestreaming? Reach out to a Panasonic House of Worship expert to get setup with a NDI switcher and NDI PTZ camera solution today!