Gold in sportstech at the U.S. Olympic Training Center

Gold in sportstech at the U.S. Olympic Training Center

Before they compete in the Olympic and Paralympic Games, some of the top athletes in the United States devote hours to training at a 35-acre site in Southern Colorado. The Olympic Training Center at Colorado Springs is one of two such training centers in the U.S. It has the capacity to host hundreds of specially selected athletes in training and coaches. 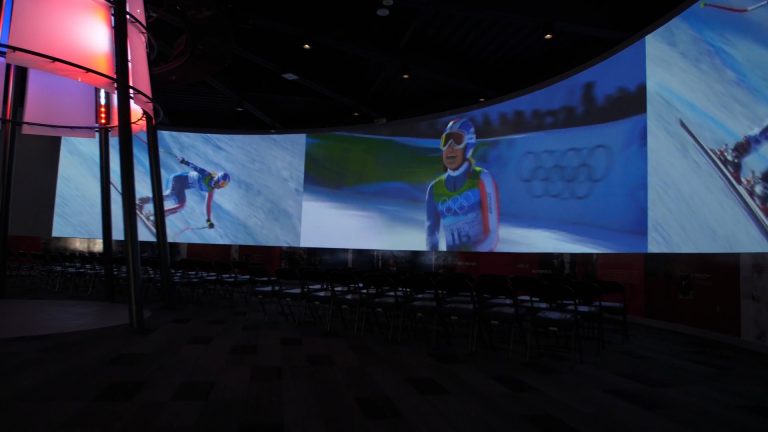 Every year about 125,000 visitors tour the center where they can check out how long the longest jump is, pretend to steer a bobsled, or with luck catch a grueling training session like boxers sparring while sporting wearable tech measuring speed and power of punches. If timing is right, their tour will be led by a U.S. Olympic or Paralympic athlete.

Telling the story of U.S. Olympic and Paralympic athletes

To help tell the story of the Team USA athletes past and present, the USOC worked with Panasonic to create an immersive experience using a five-projector video rotunda that greets visitors to the center. The rotunda has the capacity to display one continuous image that is 100 feet wide and 20 feet high.

How big is that? Picture three school buses in surround and you get the picture. The rotunda’s display capacity is also entirely customizable so that, instead of one single image, it can display a mosaic of images to showcase the most memorable moments through the rich U.S. Olympic and Paralympic history in a 180-degree projection.
Here’s how one recent visitor describes it: “A round room plays videos of U.S. Olympic moments in a constant cycle. It was interesting to see the famous moments that we all remember and some wonderful ones that have been forgotten.”

Live feeds of U.S. athletes around the globe

Augmenting the five-projector rotunda display are four interactive touch screen panels that allow visitors to find their favorite Team USA athlete and pull up stats on their performances. Bringing fans recent wins is a nine-panel display wall that streams live video feeds of U.S. athletes from across the globe. USOC Director of Sport Business Development Michael Cain said the sportstech wows visitors: “Most people that come are already fans of Team USA. Now when they leave, they’re that much more energized about being a fan,” he said.

Training athletes for the Paralympic Games is a crucial part of the Colorado center’s mission, and competitors from all different sport disciplines use the facility to prepare.

For the past 18 years – from the Nagano 1998 Winter Games to the 2016 Rio Summer Games – Panasonic has supplied audio-visual equipment to both the summer and winter Paralympic Games. Panasonic recently announced support for the U.S. Paralympic Team through the Paralympic Games Tokyo 2020.

Panasonic’s commitment to the Paralympics is part of its support for the Olympic Games that dates back more than a quarter of a century. Panasonic, the Official Worldwide Partner of the Games, is already supporting Olympic Winter Games PyeongChang 2018 in Korea and delivered its AV equipment to the ski jump venue for a recent test event earlier this year. The Winter Games begin on Feb. 9, 2018.

The immersive experience must go on

Based on the hit musical, Million Dollar Quartet, CMT Network’s Sun Records tells the untold story of the birth of rock ‘n’ roll.

Birdland, directed and co-written by Peter Lynch, is a film that was shot by cinematographer Adam Swica, CSC (The Art of the Steal, The Firm) with a single VariCam 35 camera.