It’s all About the Connected Consumer

Light ID is a technology that allows nearly instantaneous access via smartphone to information about anything from artwork to food to sports stats by using encoded light signals embedded in digital screens. Panasonic recently introduced the technology at the Tokyo Big Sight International Exhibition Center, and a major Tokyo train terminal--Futako-Tamagawa Station. The Pushkin State Museum of Fine Arts in Moscow is implementing a Light ID pilot project to give visitors a chance to get information about artworks in several languages in audio and video. Thanks to a new tech tie-up between Panasonic and ComQi, U.S. retailers will be able to easily connect consumers to messaging on digital signage, using Light ID. 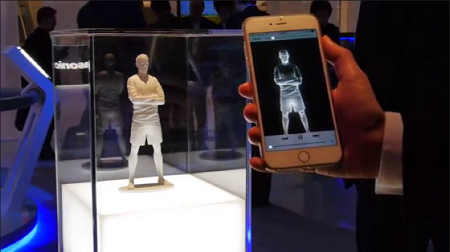 ComQi is a global leader providing a cloud-based Shopper Engagement Technology that influences consumers at the point of decision, in-venue, using all digital touch-points. The company is headquartered in NYC, and its customers include Six Flags Entertainment Corp., Meijers and the Gap.

With Panasonic’s Light ID technology incorporated into digital signage, consumers can point their smartphones at ComQi-powered displays and automatically pull down more detailed information that interests them – such as products and promotions – to their devices.

Light ID technology is similar to QR codes or bar codes, but written in light. An imperceptible flashing white LED beam, incorporated into the lighting source that illuminates the LCD display, transmits the signal, which is tied to content scheduled by ComQi’s digital signage management platform called EnGage. “This compelling technology is yet another addition to EnGage’s IoT capabilities,” says ComQi’s CEO Ifti Ifhar, “and a step, as well, towards enhancing the shopping experience, by making the offline-to-online (O2O) approach more seamless for both retailers and shoppers.”

“We are proud to offer this breakthrough technology, which can provide the right information to people in a convenient way, especially in info-dense environments such as malls, airports and rail stations,” says Richard Hsu, VP of Engineering at AVC Networks North America, a unit of Panasonic Corporation of North America in Newark, NJ. “With this ComQi initiative, Panasonic marks the first commercial application of Light ID in the U.S. retail market, and we look forward to rolling it out at multiple pilot sites. We expect that this technology will further enhance Panasonic’s ability to grow into a larger retail solutions provider in North America.”

--Light ID allows targeted content to be activated by launching an app, and pointing the phone camera at the LCD screen’s light source--even from a distance. Because Light ID has a high-speed transmission rate, information will decode and move to a user phone almost immediately.

--Light ID can also be used for non-digital applications, like printed posters illuminated by light boxes.