One of the most honest portraits of teenage life, 13 Reasons Why is a Netflix series based on the 2007 young adult novel by Jay Asher and adapted by Brian Yorkey. Set in Northern California, the 13-episode series, starring Dylan Minnette and Katherine Langford, tells the story of a high school student, Hannah Baker, who kills herself after perceived humiliation by friends and schoolmates. Two of the show’s executive producers include pop star Selena Gomez and Academy Award winning writer/director Tom McCarthy (Spotlight, Win Win), who directed the first two episodes of the series.

McCarthy worked with cinematographer Andrij Parekh (Show Me a Hero, Blue Valentine) with Panasonic VariCam 35 cinema cameras. During prep, Parekh tested the VariCam 35, Alexa 65, and the Sony F55. One of the main reasons he selected the VariCam 35 was due to the camera’s native 5,000 ISO setting for lowlight shooting. “The sensitivity in the VariCam is quite remarkable,” reveals Parekh. “It was a very clean 5,000 ISO, unlike what you would get out of an Alexa at 5,000.” 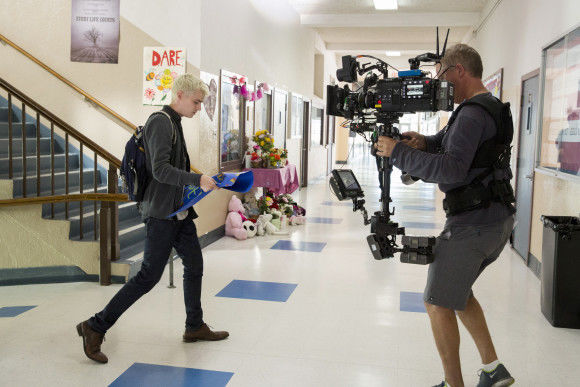 The VariCam 35 on a Steadicam shooting actor Miles Heizer. (Photo by Beth Dubber/Netflix)

Parekh and McCarthy re-watched a lot of teen movies from their youth and John Hughes’ The Breakfast Club (1985), Gus Van Sant’s Elephant (2003) and the TV series My So Called Life (1994) were big influences on the look of the series. Regarding The Breakfast Club, Parekh liked the film’s naturalistic look, as well as the subjective views for each character.

For 13 Reasons Why, Parekh and McCarthy decided to create two different looks – one that depicts the present, or aftermath, and one that shows the past, leading up to Hannah’s suicide. “The show is basically about a teen girl’s suicide and shows the past and present,” explains Parekh. “I wanted to separate them visually but not make the visual differences too pronounced.  It was something that I hoped the audience would feel and not be distracted by. To create these looks, we used anamorphic 2:1 lenses for the past and spherical lenses for the present.” 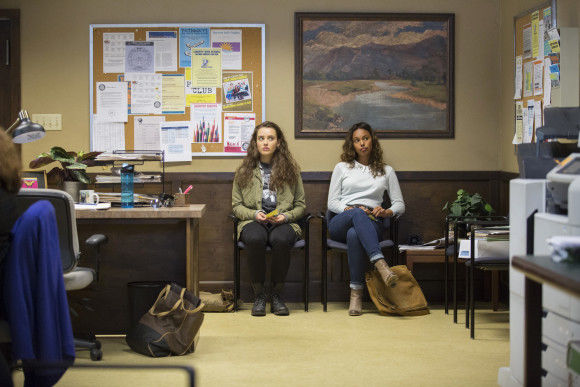 Cinematographer Andrij Parekh and director Tom McCarthy decided to create two different looks – one that depicts the present and one that shows the past. (Photo by Beth Dubber/Netflix)

For the past, Parekh chose Hawk V-Lite anamorphic lenses. He liked the Hawks because they were lighter than most 2:1 anamorphic lenses. “We shot a lot of handheld for the past so having a lighter lens was important to me,” explains Parekh. “I also love the focus fall off on the wider end. The Hawks have all the great characteristics of anamorphics – the center being sharp and the edges being a little softer. With the VariCam 35’s native 5000 ISO, we were shooting with anamorphics (f/2.2 – 2.8) with an ND .6 or .9. For night exteriors, that was really unheard of and a first for me.”

Because the series is viewed in the 16:9 aspect ratio, Parekh had to center cut the 2.40:1 frame. “By doing this, you basically end up using a little less of the 4K digital negative,” he explains, “but what it did give us was a softer, more romantic look for the past.” 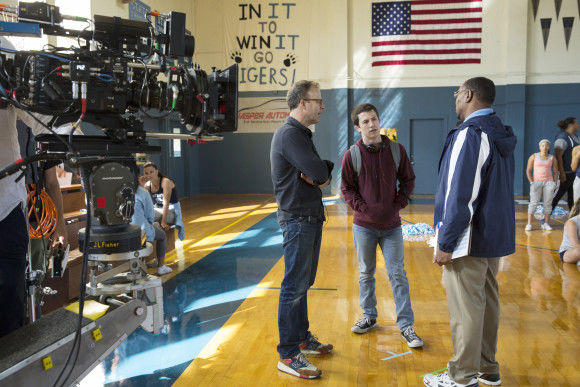 For the present, Parekh selected Leica Summilux C-series prime lenses because the lenses “have a softness and roundness to them but also allowed us to light a little harder and more dramatically to counteract that softness. The Leica lenses render digital in a very pleasing way. The focus fall off is fantastic at T-1.4 and we were shooting them wide open all the time.” Parekh’s standard set was an 18, 25, 35, 40, 50, 75, and 100 but he shot “present” scenes generally with longer lenses.

Parekh captured UHD (3849 x 2160) AVC Intra 444 files to expressP2 cards. “Most of our audience are probably going to watch the show on their iPhones or iPads, or maybe a television at home. The AVC Intra codec’s resolution was perfect for broadcast, and it didn’t require massive data storage.” 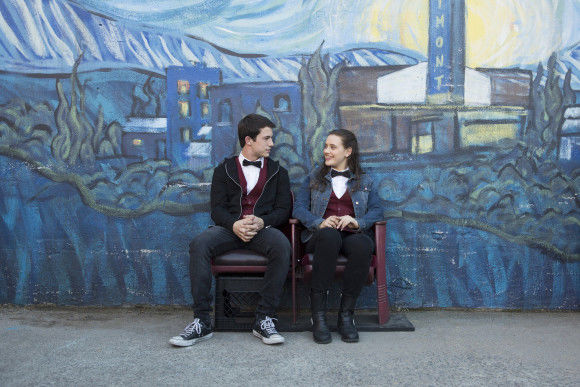 One of the biggest influences on the look of 13 Reasons Why was John Hughes' 1985 film The Breakfast Club.

One of Parekh and McCarthy’s biggest challenges was the short amount of time they had to create the appropriate style for the show. Since he was shooting only the pilot and second episode, Parekh had 12 or 13 days for each episode. (Cinematographer Ivan Strasburg, BSC shot the remainder of the series.) “It’s always difficult when you’re working with a new director and you don’t have a shorthand yet to come up with a style that feels specific and organic to the material,” explains Parekh. “Tom and I found it pretty quickly, through watching specific films for the subject matter and because we both have similar tastes. Joachim Trier’s Reprise was stylistically very important to the feel of the show– and when you have similar tastes with someone, and you’re not fighting each other, it’s much easier.”

During the shoot, Parekh used native 5,000 ISO mainly at night and was greatly impressed at the lack of noise. For day shooting, he shot at native 800 ISO. In terms of lighting, Parekh revealed that he lit with the same amount of light as with any camera but the crew didn’t have to struggle when shooting on longer lenses. “With the anamorphics you’re on a 2.2 on the Hawk for the 35,45,55 but then you jump to a 2.8 or 3.5 when you want to go to a 100mm or longer,” he reveals. “It allowed for more long lens anamorphic shooting at low light.” 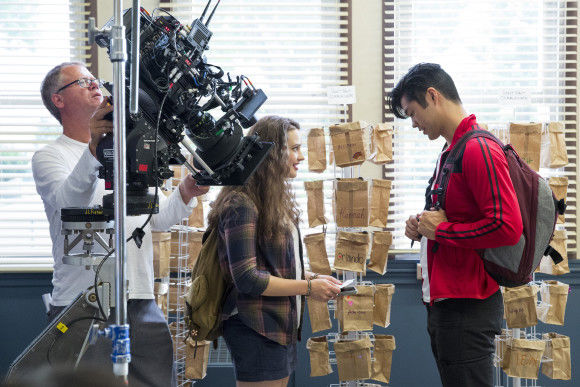 In terms of lighting, Parekh puts all his lights through bleached or unbleached muslin. “Whether it’s HMIs through muslin or Kino Flos through muslin, I always try to take the electronics out of the lighting and cameras.  So, I use muslin, which is an organic cloth that counteracts that. What you end up doing is using more light because it cuts a tremendous amount, but I still like the softness the muslin gives you.”

13 Reasons Why was posted in Los Angeles at Encore Hollywood and graded by colorist, Laura Jans Fazio. Parekh was able to help grade the first two episodes. “Laura basically helped me set up the LUTs at the beginning, and then she came in and did the DI at the end,” says Parekh. “The grade for me is always the polishing of the shoes and not necessarily creating a look. Netflix gave us Alexa emulation LUTs, which we doctored to create our own LUTs that Laura used. Our LUTs were put into the cameras ahead of time and I had all our monitors calibrated to each other. I also calibrated our monitors to Laura’s monitor so we were all on the same playing field.”

Watch the original trailer for 13 Reasons Why…

To watch 13 Reasons Why, visit www.netflix.com. (You will need a Netflix membership to view.)

For more information on the VariCam 35, visit www.us.panasonic.com/varicam.