Technics today announced the new SL-1210G Direct Drive Turntable. Fully inheriting all technical specifications of the SL-1200G, the SL-1210G model enriches the Technics turntable portfolio with another future classic. We learned from the huge success of the limited edition SL-1210GAE, which was launched in June 2020 and almost immediately sold out. We realized there is high demand for a ‘regular’ black version of this 1200 Series top model. Apart from the technologically superior construction, this fine classic boasts a fit and build satisfying the very highest demands. In its striking black finish, the new SL-1210G possesses an aura of genuine elegance. 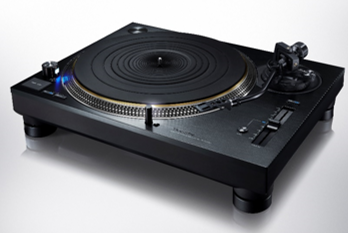 The overall quality and performance level of the SL-1210G defines the highest turntable standards and justifies combining with the finest pickup cartridges available for a truly emotional, highly inspiring vinyl playback.

The key features and specs of the SL-1210G are as follows:

About the Technics 1200 Series

The SL-1200 was launched as a popular direct drive turntable in 1972, becoming a best-selling model with cumulative sales of 3,500,000 units for the series. It was supported by powerful torque, easy operation, and high durability. It became greatly admired by both audio enthusiasts and DJs who helped to unleash the DJ culture in areas such as electronic dance music. The series is still highly acclaimed by DJs worldwide today.

In 2016, after the revival of the Technics brand in 2014, Technics released the limited SL-1200GAE turntable, defining vinyl playback standards by the newly developed iron-coreless direct drive motor, eliminating the unwanted “cogging”, thus enabling a new standard of rotational stability. Together with evolutionary improvements in the fields of tonearm, platter and chassis construction, the new 1200 Series turntable generation made its way out of pure DJ usage towards the audiophile market with its high-quality integrity, accuracy and musical enjoyment. Since then, Technics has released numerous turntable models of the new 1200 Series based on the coreless direct drive principle. The new SL-1210G, together with the SL-1200G, define the culmination of the Technics 1200 Series culture.