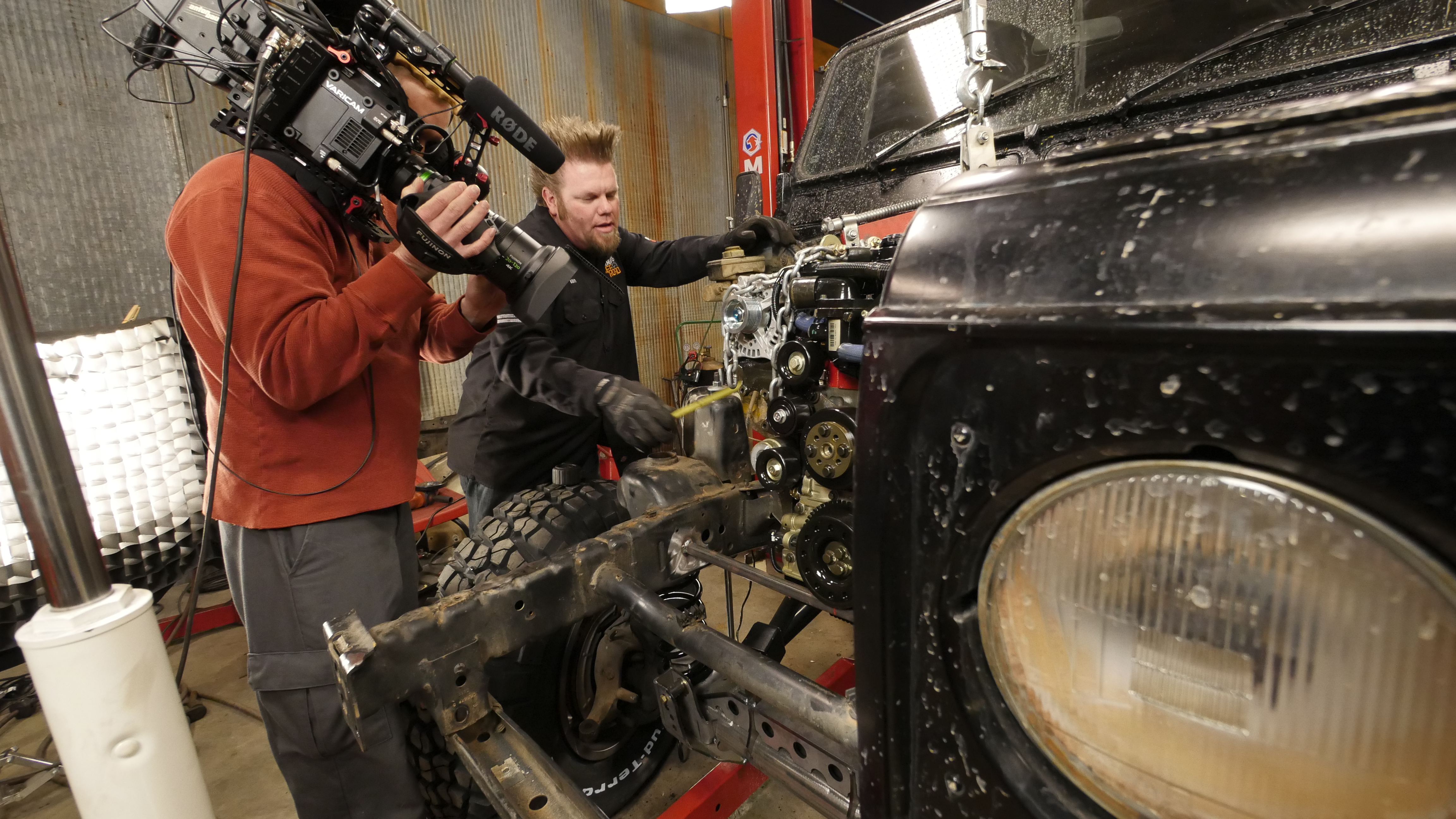 Most weekends, auto enthusiasts can literally get their fix by watching the two-hour PowerNation TV block of four shows--Detroit Muscle, Engine Power, Truck Tech, Xtreme Off Road  —on the CBS Sports Network, NBC Sports Network, and Spike cable networks, as well as on most of the 60+ broadcast stations owned by RTM Productions’ parent company, Raycom Media.

RTM Productions’ company president Matthew Hawkins said, “There were only a handful of cam-eras that met our criteria of having a large sensor, HDR, VFR, simultaneous recording options and 4K output. With its stand-out asset of dual native 800/5000 ISOs as well as all these features, the VariCam LT led the way.”

RTM Productions shoots 92 episodes (23 of each show) each year. The facility house six separate production studios, one assigned to each of the block shows, the fifth to “PowerNation Interstitials and PowerNation Daily.”  The PowerNation interstitials run throughout the block featuring unique vehicles and interviews with automotive industry leaders and trendsetters.  PowerNation Daily runs online and has the latest auto industry news. The sixth studio is dedicated to
PowerNation Garage, a new show that is distributed digitally and can be found online at PowerNa-tionTV.com

Seventy percent of the programming is shot in these studios, with a minimum of one VariCam LT assigned to each studio (the exception being PowerNation Garage, which is shot exclusively with DVX200 handhelds). Hawkins said the VariCam LTs, outfitted with Fujinon 20-120mm Cabrio PL lenses, are utilized 70 % handheld, 20% on tripods, and 10% on jibs. “Pay-off” segments, showing the results of in-studio fabrications, are shot outdoors on race tracks, drag strips, at off-road events and so on.

“The VariCam LT’s dual ISOs make perfect sense for us, as we shoot indoors in gritty, low-lit stu-dios and outside in bright sunlight,” said Mark Inglis, Creative Director for RTM. “The camcorder’s low-light sensitivity blew us away.”

“We use the ISO5000 setting every day, but often dial back to ISO2000, where we can still light normally but achieve greater depth of field,” he added.

“The importance of VariCam LT’s HDR capability can’t be overstated,” said Randy Byrne, Post Production Director for RTM.  “So many of our shots are up under cars, angles that aren’t easily lit, and we never saw great contrast shooting in HD. Now, with the expanded color space, we’re see-ing detail and variations in the blacks.”

Shows are captured in AVC-Intra 4K 4:2:2, with a simultaneous record of high-resolution HD prox-ies. Each studio has a workstation where the directors edit a rough cut. Master files are backed up to servers and LTO. “The proxies help us navigate the thumbnails for the final edit,” Byrne noted. RTM Productions’ NLE platform is Adobe Premiere Pro.

While acquisition and editing is 4K based, PowerNation shows are delivered in 1080i. “We’re ready to deliver in 4K, and we’re preserving our 4K masters for residual use,” Hawkins said.

“The Panasonic camcorders have stepped up our game,” he continued. “Shooting and lighting are easier, and we’re delivering an improved end product, with a greater level of detail that our enthusi-ast audience craves.”

For more information about RTM Productions and PowerNation, visit www.powernationtv.com.

About the VariCam LT
The VariCam LT camcorder inherits the same super 35mm sensor and superb imaging capabilities that distinguish the award-winning VariCam 35, but with significant reductions in size, weight and price. Incorporating this identical imaging “DNA” in a more compact rendition, the VariCam LT de-livers 14+ stops of dynamic range with V-Log, and the esteemed cinematic VariCam image quality and color science, as well as the VariCam 35's breakout innovation, dual native ISOs of 800/5000. Weighing just under six pounds and having superior capability to similar sized cameras, the Vari-Cam LT is the ideal camera for handheld, Steadicam, jib, crane, drone, gimbal and overall cinema verité work.

About the AG-DVX200
The DVX200 is the first in a new generation of large sensor, multi-format professional camcorders capable of capturing 4K/UHD, HD and SD, including cinematic DCI 4K 4096x2160. The camcorder is optimized for 4K/HD production, with stunning bokeh effects and a V-Log L curve (measured at 12 stops) emulating the natural grey-scale rendition of the VariCam 35. The DVX200 incorporates a newly-developed 4/3” large-format MOS sensor with high sensitivity of