The HZ2000 is the world’s first OLED TV to support both Dolby Vision IQ and Filmmaker Mode in addition to Dolby Vision, HDR10+, and HLG Photo, the still image format which brings still photography into the HDR world.

Furthermore, not only does it support Filmmaker Mode, but adds to it Panasonic’s original “Intelligent Sensing” which dynamically adjusts the picture based on ambient light levels. Tuned together with Hollywood studios to ensure a perceptual color and picture match with the creative intent, this feature ensures that viewers can enjoy Hollywood level HDR picture quality whether in dark or well-lit environments.

Dolby Vision IQ extends the benefits of Dolby Vision beyond HDR by intelligently optimizing picture quality experiences for viewers regardless of ambient light or content type – all without consumers picking up their remote.

For true film enthusiasts and postproduction partners, Panasonic has also expanded the calibration possibilities by adding two addition calibration points at world’s first 0.5% and 1.3% signal levels. This will allow viewers to control the transition out of black with even higher levels of precision. Viewers will also for the first time on Panasonic TVs be able to calibrate Dolby Vision content too. 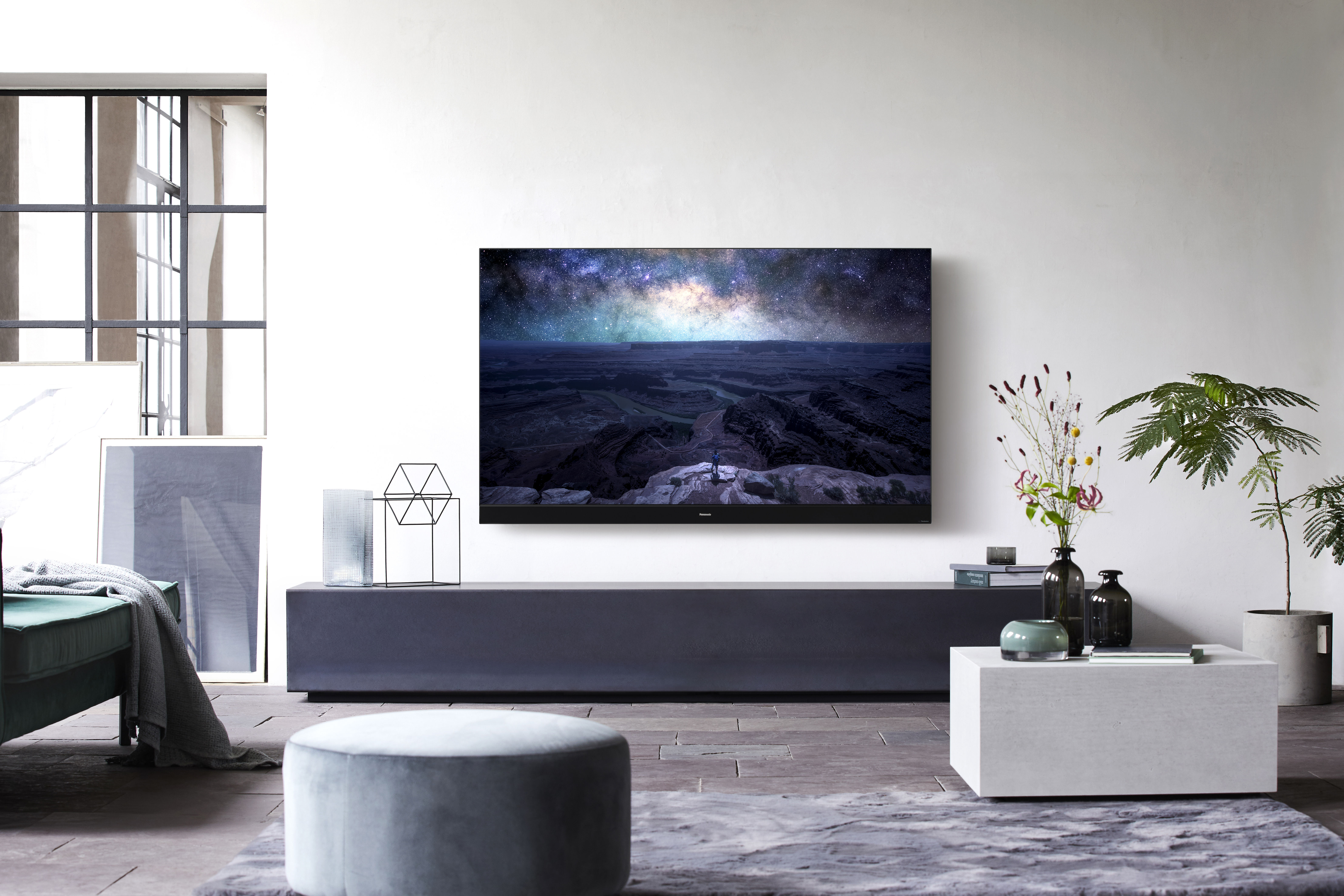 In terms of sound, the HZ2000 features innovative built-in upward-firing speakers capable of delivering Dolby Atmos immersive audio with total ease and convenience. The total audio system has also been tuned by Technics engineers.  With support for voice assistants, the HZ2000 can integrate seamlessly with a Smart Home setup.

Yasushi Murayama, Executive of Product Strategy for Panasonic’s Visual and Sound Business Unit, says: “The HZ2000 really expands the viewing environments in which viewers can enjoy true Hollywood picture quality. Thanks to Dolby Vision IQ and Filmmaker Mode with Panasonic’s unique Intelligent Sensing feature, viewers will still see all the details and colors that the creators wanted them to see, even if they are watching in a well-lit room. Last year Panasonic expanded Hollywood-level picture quality down to core-range TV with Dolby Vision and HDR10+, this year we are taking that one step further by expanding Hollywood quality to more viewing environments too.”

Stefan Sonnenfeld works with Panasonic to guarantee the filmmakers’ intent

The new HZ2000 OLED represents the combination of Panasonic’s technical accuracy made possible by Japanese knowhow and engineering with the color-tuning skills of Stefan Sonnenfeld.

Stefan Sonnenfeld, Founder and CEO of Company 3 is a trusted collaborator of some of the world’s best filmmakers. Sonnenfeld is among a handful of leading artists who has championed the power of color grading to tell stories and communicate emotion. Described by NPR as a “da Vinci of the movies,” Sonnenfeld has applied his skills as a colorist to many of the most acclaimed and popular features of the past decade: A Star is Born, Wonder Woman, Man of Steel, Beauty and the Beast, Star Wars: The Force Awakens, Jurassic World, 300 and many more. Like many other leading colorists, he uses Panasonic OLED screens as large-format client reference monitors in his daily workflow.

No ordinary OLED panel, the bespoke Master HDR OLED Professional Edition panel has been exclusively customized by Panasonic R&D engineers. This has resulted in even greater control of the parameters that affect picture quality. In particular, the peak has been boosted by around 20 percent and average brightness levels have also been increased significantly and contrast handling improved, resulting in increased dynamic range. HDR content now looks even more impactful, with the HZ2000 effortlessly able to reproduce tricky scenes of variable bright-ness and contrast often found in cinematic and sports contents. As a result of this level of customization, combined with the exceptional color-optimizing skills of Sonnenfeld, Panasonic has created some of the most accurate, cinematic images ever seen on a TV.

Panasonic’s OLED TVs are widely used in studios and postproduction houses throughout the world. With the HZ2000, Panasonic adds some additional features to the HZ2000 designed to delight both film enthusiasts and studios.

Firstly, Panasonic has further extended the range and reduced the interval between calibration steps at the darkest end of the RGB and gamma scales by now supporting world’s first calibration points at 0.5% and 1.3%.

Secondly, based on requested from Hollywood studios and post-production houses, the HZ2000 will for the first time allow professional users to turn off the tone-mapping, enabling ‘hard clipping’ — an essential feature for creative use.

The HZ2000 will be one of a handful of TVs in 2020 which supports both Filmmaker Mode and Dolby Vision IQ.

Developed by the UHD Alliance, Filmmaker Mode allows users to enjoy cinematic video as it was intended by creators through pressing just a single button on the remote control. When activated, Filmmaker Mode respects the frame rate, aspect ratio, color and contrast of the content whilst also turning off noise reduction and sharpening. The mode is supported by a who's who of Hollywood directors, including Christopher Nolan, Martin Scorsese, Patty Jenkins, Ryan Coogler, and Paul Thomas Anderson and many others.

Furthermore, Panasonic uniquely builds on top of Filmmaker Mode in the HZ2000 by also using the advanced external sensors in the TV to adjust the picture intelligently according to ambient light levels. Whereas HDR content could look too dark when viewed in a well-lit room, Filmmaker Mode with Intelligent Sensing perceptually matches the impression of viewing the content in an ideal darkened environment even if you are sitting in a well-lit living room. This means that viewers will see all the details you supposed to see, even in very dark scenes. To ensure that this feature matches the creators’ intentions, Panasonic’s engineers worked together extensively with two Hollywood studios to ensure the best possible perceptual match. Filmmaker Mode with Intelligent Sensing supports content in HDR10+, HDR10, HLG, and SDR.

Panasonic also expands the capabilities of the HZ2000 to Hollywood’s highest fidelity content, Dolby Vision, through its support of Dolby Vision IQ. Dolby Vision IQ uses Dolby Vision dynamic metadata to intelligently display every detail of the content, adjusting to the brightness of the room. It also informs the TV what type of content is being shown and will modify its settings to ensure images are displayed exactly as they should be. With Dolby Vision and now Dolby Vision IQ, viewers will see things what the creator intended in any room and with any content type.

“Dolby is constantly thinking about how we can further improve consumer entertainment experiences and we are bringing these innovations to life through new innovations like Dolby Vision IQ, which will be available on Panasonic’s HZ2000 OLED TV,” said Giles Baker, Senior Vice President, Consumer Entertainment Group, Dolby Laboratories. “Dolby Vision and Dolby Atmos are transformative experiences changing the way consumers enjoy entertainment, and now with Dolby Vision IQ, consumers can now harness the full potential of their TV.”

By supporting both Filmmaker Mode with Intelligent Sensing and Dolby Vision IQ, the HZ2000 ensures that viewers uniquely will be able to see Dolby Vision, HDR10+, HDR10, HLG and SDR contents as they were intended even in brightly-lit rooms.

The HZ2000 is compatible with multiple formats of dynamic HDR metadata and ensures that viewers experience the best possible TV pictures available regardless of their source. The HZ2000 is capable of displaying both HDR10+ and Dolby Vision. And with Multi HDR support, the HZ2000 is also compatible with HLG (Hybrid Log-Gamma), which is an HDR format widely adopted by TV broadcasters. HLG Photo, a new still image format is also supported. The screen also supports regular HDR10, as found on most UHD Blu-ray discs and many streaming services.

The HZ2000’s HDR OLED panel is powered by Panasonic’s most advanced processor ever, which rapidly analyses the color, contrast and clarity of 4K video content, optimizing them and giving more control over the screen’s all-new Panasonic-customized OLED panel. Featuring a Dynamic LUT, the HZ2000 is Panasonic’s most advanced TV ever at selecting and displaying the correct color for every single brightness level. Even when brightness levels and contrast vary rapidly within a scene the HZ2000 unfailingly delivers the most accurate colors, resulting in a more satisfying image than ever before.

Dolby Atmos transports listeners from an ordinary moment into an extraordinary experience with moving audio that flows all around listeners. Listeners will feel like they’re inside the action as the sounds of people, places, things, and music come alive with breathtaking realism and move throughout the space. And because Dolby Atmos is built right in to the HZ2000, it’s never been easier to experience immersive audio in your home.

Despite its impressively thin profile, the HZ2000 delivers a powerful and dynamic output complemented by a powerful bass. The total sound system has been tuned by engineers from Panasonic’s acclaimed audio brand, Technics, and also feature Technics’ proprietary JENO Engine for accurate, refined sound.

The HZ2000 features the latest iteration of Panasonic’s highly evaluated smart TV OS, My Home Screen 5.0. The new version delivers considerable usability improvements. For example, when certain VOD icons are highlighted, thumbnails of featured titles from that provider are automatically displayed above and can be easily accessed. This works for Netflix and YouTube amongst others.

The HZ2000 will also feature XUMO’s enterprise-level, free streaming service delivering both over-the-air and over-the-top channels to global audiences in one seamless experience and guide. End users simply press the channel up and down or guide button on the TV remote control to discover and enjoy watching these channels, just like a broadcast TV viewing experience.

Based in Newark, NJ, Panasonic Consumer Electronics Company is a division of Panasonic Corporation of North America, the principal North American subsidiary of Panasonic Corporation. The company offers a wide range of consumer solutions in the U.S. including LUMIX Digital Cameras, Camcorders, Blu-ray players, Home Audio, Technics, Cordless Phones, Home Appliances, Beauty, Grooming, Wellness and Personal Care products and more. One of Interbrand’s Top 100 Best Global Brands of 2018, Panasonic is a leading technology partner and integrator to consumers, businesses and government agencies across the region.