Panasonic Corporation today announced that it has achieved a photovoltaic module conversion efficiency*1 of 23.8%*2 (aperture area*3: 11,562 cm2) at research level, a major increase over the previous world record for crystalline silicon-based photovoltaic modules.

Going forward, Panasonic will continue to pursue technology development of its photovoltaic module HITTM, aimed at realizing higher efficiency, higher reliability and lower costs, and will work towards mass production.

*HIT is a trademark of the Panasonic Group.

*1 According to research by Panasonic as of February 18, 2016, for crystalline silicon photovoltaic modules.
*2 Result of evaluations at the National Institute of Advanced Industrial Science and Technology (of Japan).
*3 The module area is the aperture area opened by the masks (11,562 cm2).
*4 SunPower (USA) November, 2015. Judged from the "Solar cell efficiency tables
(version 47)" [Prog. Photovolt: Res. Appl. 2016; 24:3-11]
*5 Technology for junction formation required for solar cells that covers the silicon base surface with an amorphous silicon layer. This technology has the key feature of superior passivation to compensate for the many flaws around the silicon base surface area.
*6 Technology for eliminating the shadow loss on the front side electrode with the electrodes on the back of the solar cell, which allows the more efficient utilization of sunlight. 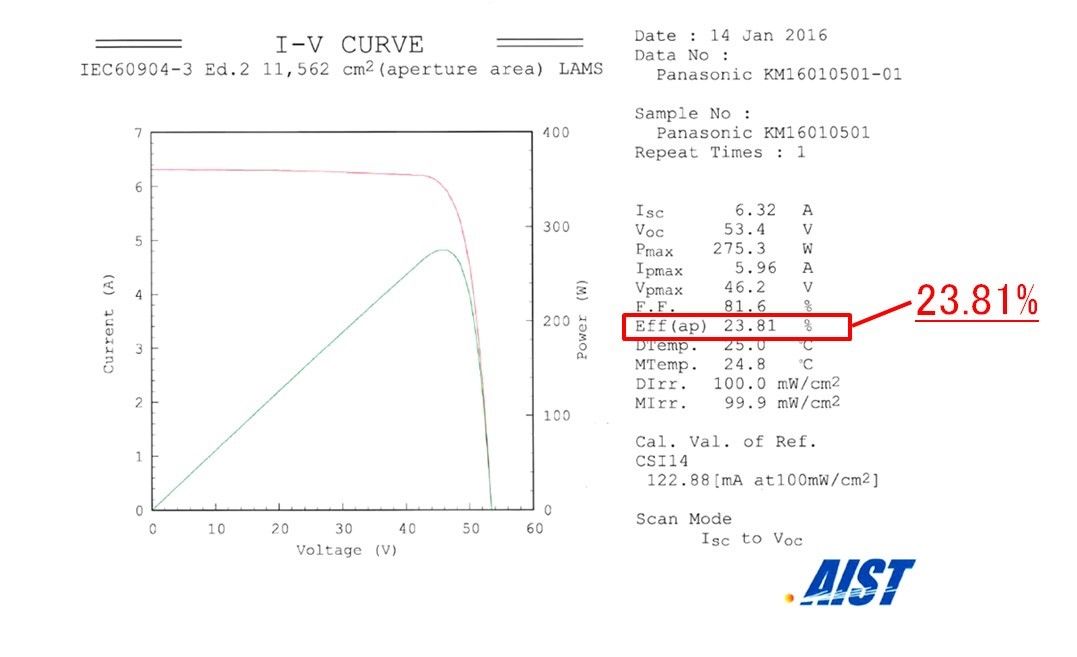 Images of Panasonic cystalline silicon-based photovoltaic modules can be downloaded from the following URL : http://news.panasonic.com/global/press/

About Panasonic
Panasonic Corporation is a worldwide leader in the development of diverse electronics technologies and solutions for customers in the consumer electronics, housing, automotive, enterprise solutions and device industries. Since its founding in 1918, the company has expanded globally and now operates 468 subsidiaries and 94 associated companies worldwide, recording consolidated net sales of 7.715 trillion yen for the year ended March 31, 2015. Committed to pursuing new value through innovation across divisional lines, the company uses its technologies to create a better life and a better world for its customers. To learn more about Panasonic: http://www.panasonic.com/global