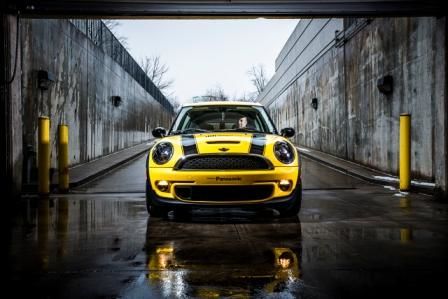 “We received overwhelmingly positive reactions when our collaboration agreement with Abbey Road Studios was first was announced at the 2013 North American International Auto Show,” said Tom Gebhardt, President, Panasonic Automotive Systems Company of .  “People around the world continue to enjoy the vast collection of great music recorded, produced and mastered at Abbey Road Studios.  We are pleased to share our combined vision of the Abbey Road Studios premium audio system in this world’s first demonstration vehicle.  Now people can have an Abbey Road Studios sound experience whenever they are driving.”

The Panasonic/Abbey Road Studios design concept—the combination of two brands with mass appeal to markets across the globe—is configured in a 2014 Mini Cooper Clubman S.

“Bringing together Panasonic’s automotive audio expertise, with the experience of our engineering team and legendary audio equipment is a powerful combination.  This demonstration vehicle is the vision of two companies that share a passion and love for both music and remarkable audio experiences,” said Jonathan Smith, Senior Vice President, Abbey Road Studios.

Abbey Road Studios, the birthplace of stereo recording, is arguably the most famous recording studio complex in the world. Legendary and timeless, it has an unparalleled status in the history of music  — a place where some of the world's most celebrated artists, producers, composers and performers have come to record.  Abbey Road remains one of the world’s most technically advanced recording and mixing facilities. With award-winning engineers, unique acoustic spaces, the greatest working microphone collection in the world, and a unique blend of vintage equipment and modern technology, it is easy to see why legendary artists return time and time again to record, mix and master their music.

“Consumers today have increasingly high expectations of the brands they trust and associate themselves with,” Panasonic’s Tom Gebhardt said. They expect each experience will meet or exceed the last. The distinction of our combined brands is the ability to be uniquely understood, appreciated and valued by consumers in a marketplace full of ever-expanding choices.”

According to information and analytics provider IHS (NYSE: IHS), Panasonic remained the top supplier of automotive infotainment systems worldwide, “putting it at the forefront of the fast-growing market for equipment that delivers information and entertainment to motorists.” A 2012 report by IHS found that Panasonic along with the rest of the Top 10 suppliers accounted for nearly two-thirds of overall motor vehicle infotainment revenue in 2012.

’s Abbey Road Studios is the most famous recording complex in the world and an iconic symbol of British music. Opened in 1931, the studios celebrated their 80th anniversary and have been home to countless landmark recordings and pioneering advances in recording technology. Many of the world’s most famous artists have recorded some of their greatest work at Abbey Road Studios, including The Beatles, Pink Floyd, The Hollies, Oasis, Elbow, Coldplay, Lady Gaga and Adele.

As one of the world’s premiere locations for movie scoring since the 1980s, films such as Raiders of the Lost Ark, Star Wars, Braveheart, the Lord of The Rings Trilogy and The King’s Speech have been recorded there. The list continues with many other major titles including Shrek, Harry Potter, Skyfall and The Hobbit.

Recently a number of blockbuster videogames, such as Halo & Call of Duty, have also recorded their soundtracks at .

About Panasonic Automotive Systems Company of