NEWARK, NJ (July 16, 2019) – FilmEd Academy of the Arts (Newport Beach, CA), which for nearly 20 years has provided production services and filmmaking training to high schools throughout Orange County, has added 15 Panasonic VariCam LT 4K cinema camcorders to its inventory. The VariCam LTs complement 18 VariCam 35s cameras that FilmEd has made available to students for the past several years.

Prior to purchasing the VariCam LTs, FilmEd students had worked with Panasonic AG-HVX200 P2 HD camcorders for handheld instruction for many years.

FilmEd Executive Director David Junker said that having the VariCam LTs for handheld work was his “dream option.” “The LT is certainly a lot more camera than a traditional prosumer model, but it works completely hand-in-hand with the VariCam 35 in terms of the control panel, menus and overall operation,” he said. 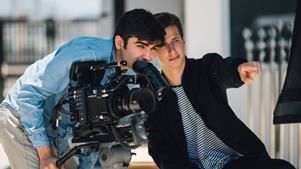 “Also, the LT’s quality build is part of what we purchased,” Junker continued. “In terms of day-to-day wear and tear, the camcorder is a beast in terms of handling—and it’s handled by up to 450 students at 15 different schools. What’s more, there’s the LT’s brilliant image quality.”

FilmEd is utilizing the VariCam LTs at its summer workshops, which have recently begun. Beginning students typically shoot in 1920x1080 ProRes HQ (a broad standard for schools’ in-house broadcasts) while the advanced students predominantly shoot in 4K. All students will use the VariCam 35/LTs on four test projects, encompassing the production of a Public Service Announcement (PSA), spot feature, music video and short silent film. Editing is done in Adobe Premiere.

Because FilmEd’s VariCam 35s are outfitted with an HD by 35 adapter that enables the use of B4 lenses on a PL mount, during the school year these cameras tend to be used mostly shoulder-mounted for documentary-style work.  Because the VariCam LTs feature an EF mount suitable for the wide array of lenses available for smaller cameras—especially primes—students used the LTs for cinema-style shooting when the camcorders came into rotation during the last school year.

Junker noted that all students are encouraged to shoot in 4K for festival entries. He also makes the VariCam 35/LTs available to FilmEd alumni, many of whom are working at the highest level of narrative and commercial production.

“We are so proud that we are able to offer two of the finest cinema cameras in the industry to our student constituencies,” he added.

About the VariCam LT

The VariCam LT camcorder inherits the same super 35mm sensor and superb imaging capabilities that distinguish the award-winning VariCam 35, but with significant reductions in size,

For more information about Panasonic cinema cameras, visit https://na.panasonic.com/us/audio-video-solutions/broadcast-cinema-pro-video/cinema-cameras, or contact Panasonic at 877-803-8492.