The upcoming feature film Maine recently completed principal photography on a rigorous shoot with the VariCam LT 4K cinema camcorder. Maine follows the journey of a married woman from Spain to reclaim her identity while solo thru-hiking the Appalachian Trail, a trip that is sidetracked when a lone American hiker pursues her. 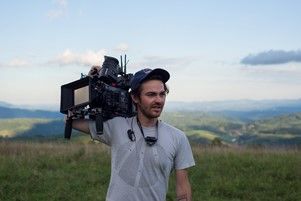 Produced by Summer Shelton and Beachside Films’ Michael B. Clark and Alex Turtletaub, this is the second collaboration of writer/director Matthew Brown and Director of Photography Donald R. Monroe; the movie stars Laia Costa and Thomas Mann. The location work for Maine was defined by an 18-day shoot in Southwest Virginia’s Grayson and Smyth Counties -- with State Parks’ wooded hiking paths standing in for the Appalachian Trail, where no filming is allowed. An additional day of ocean photography was completed off the coast of North Carolina.

Regarding the use of the VariCam LT, DP Monroe said, “Aesthetically, I have always enjoyed the color science of Panasonic cameras. Outfitting the VariCam LT with Cooke Speed Panchro vintage lenses, we were able to achieve an overall vibrant and organic look for Maine.”

"A large portion of the film was planned to be handheld therefor ergonomics was a critical factor in selecting the camera. At under six pounds, the camera allowed me to operate shots that would be up to ten minutes long in certain situations,” he added.

Maine was the winner of the inaugural AbelCine Feature Film Grant, a program initiated in partnership with Film Independent, with the award including a VariCam rental package supplied by AbelCine. (Film Independent is a Los Angeles-based non-profit arts organization that champions independent filmmakers.)

Monroe elaborated on the intrinsic production challenges the Maine narrative presented. “Simply getting to our locations proved a major hurdle,” he said. “Frequently, each day began by transporting the entire production over a mile via ATVs; then the shooting crew would walk an additional ten minutes to the location. We were often far from battery charging and data transfer stations— the high-capacity P2 cards allowed us to be largely self-sufficient.

“The VariCam LT also proved to be a rugged camera system for our nearly entirely exterior shoot. We had no problems with the camera in relatively extreme conditions. When shooting in hot weather, the camcorder never overheated, a problem typical of other similarly-priced camera systems. We found ourselves shooting in foggy conditions where moisture was a major concern; the camera held up without a problem. We hauled it up mountains, ran away from swarms of bees, crossed streams, shot in driving rain— the LT certainly earned its ‘ultra-rugged’ descriptor.”

The DP cited the VariCam LT’s extreme low-light shooting and multi-format recording as features crucial to the production. “For the campfire scenes, the director and I wanted the actors to be lit and interact with a real campfire,” he said. “To complicate the situation, the campfire had to be of a small, realistic size, only a foot-and-a-half high at most. We shot these scenes at ISO5000 to allow the small fire to serve as the key light.”

“Tracking the evolution of the story and visual language throughout the production was a critical part of our process, so being able to simultaneously record proxies made dailies immediately available at the end of each day,” he continued. “There was no time wasted waiting for transcoded footage, which got us all to bed much sooner.”

Maine was shot in AVC-Intra 4K 4:2:2 at 23.98 and 30 fps. Media was off-loaded using P2 Viewer Plus software and transcoded to ProRes 422 for editing in Adobe Premier. Describing his lens choices and lighting package, Monroe said, “To complement the incredible sharpness and saturation of the VariCam LT, we chose to shoot on a set of vintage Cooke Speed Panchros. In addition to their subtly textured bokeh, the softer, imperfect look of the Panchros very much carried the organic aesthetic.

“The overall concept in lighting Maine was to be subtle in our manipulations of the existing light often using soft sources, 12x12 white and black wind resistant rags, to add contrast and shape to subjects. Much effort was put into scheduling shooting at times when the sun would be at an appropriate angle as to limit the use of diffusing direct sunlight. That being said, a battery-powered LiteMat kit was frequently used for eye-light or fill-light for close subject shots.”

“I was delighted with the overall image quality of the VariCam LT, and it fit well into the on-set workflow of the crew,” the DP concluded.” In comparison to other super 35mm digital cinema cameras in its price range, the camcorder proved to be an efficient and reliable tool—I will certainly consider shooting future projects on the LT.”

Monroe previously collaborated with writer/director Brown on a debut feature called In the Treetops, which premiered at the 2015 Los Angeles Film Festival just days after the pair graduated from college.

Currently in post-production, Maine is slated for a 2017 festival premiere and theatrical release; plans are to distribute the film in 2K.

About the VariCam LT
The VariCam LT camcorder inherits the same super 35mm sensor and superb imaging capabilities that distinguish the award-winning VariCam 35, but with significant reductions in size, weight and price. Incorporating this identical imaging “DNA” in a more compact rendition, the VariCam LT delivers 14+ stops of dynamic range with V-Log, and the esteemed cinematic VariCam image quality and color science, as well as the VariCam 35's breakout innovation, dual native ISOs of 800/5000. Weighing just under six pounds and having superior capability to similar sized cameras, the VariCam LT is the ideal camera for handheld, SteadiCam, jib, crane, drone, gimbal and overall cinema verité work. The VariCam LT offers a host of new features including an EF lens mount, hot swappable batteries, IR shooting capability, a 23.98 PsF output, cinema style file naming, and image presets such as scene files.

Learn more about Panasonic at panasonic.com