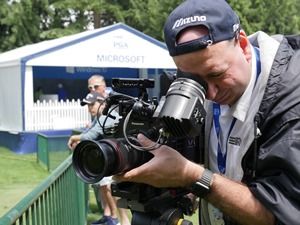 Aldrich is a longtime Panasonic user, and until taking delivery of the VariCam LTs, continued to shoot with the AJ-HPX3000 P2 HD camcorder.

“When Panasonic released the VariCam 35, it got my attention: the camera has a great look and the feature set is impressive,” Aldrich said, “but I was invested in EF glass.”

“I was ready to move to a 10-bit camera system, and while I was evaluating newer large-sensor cameras, Panasonic announced the VariCam LT, which seemed to offer everything I wanted: EF lens mount, optional PL mount that is user-swappable, 4K capture, and recording at up to 240 frames per second,” he continued. “The $16K base price was right where I wanted to be, and the VariCam LT’s familiar metadata capabilities were an important factor, as was the ability to use my legacy P2 cards for 1080p recording.”

Aldrich bought three of the most extensive accessory packages, the VariCam LT PROEX, which includes camera kit, viewfinder, shoulder mount, operating grip and PL mount, plus two 256Gbyte expressP2 cards and an expressP2 drive. The cameras were ordered through AbelCine NY, and he took delivery in New York only one day before the WPGA tournament, held at the Sahalee Country Club near Seattle, WA.

“Without much prep time, we jumped in with a mix of Canon photo glass and cine glass on the three camcorders,” Aldrich said. “Out of the box images were brilliant, just using VariCam LT de-fault settings, Scene 1, REC709 with no grading. We even made use of the 240fps recording to shoot some player hero shots, which impressed everyone who saw it.”

“We also put the proxy record functionality to work to simultaneously supply footage to multiple networks,” he added. “Using a simple SD card, I can record a full raster 1080p picture with a LUT applied at the same time my main recording occurs.”

Aldrich said that he “used every feature of the VariCam LT to do the job” at the WPGA event, and that assignments ranged from player photo ops to media interviews to archival footage shot for client KPMG, title sponsor of the event. He shot predominantly in 1080p, with some incidental footage acquired in 4K for additional framing and editing. The DP will next use the VariCam LTs to shoot executive interviews at a studio in New York City, then a short corporate documentary about a rapid-start technology incubation program in Denver.

For more information about DP Art Aldrich and his work, visit www.otektv.com.

About the VariCam LT
The VariCam LT camcorder inherits the same super 35mm sensor and superb imaging capabili-ties that distinguish the award-winning VariCam 35, but with significant reductions in size, weight and price. Incorporating this identical imaging “DNA” in a more compact rendition, the VariCam LT delivers 14+ stops of dynamic range with V-Log, and the esteemed cinematic VariCam image quality and color science, as well as the VariCam 35's breakout innovation, dual native ISOs of 800/5000. Weighing just under six pounds and having superior capability to similar sized cameras, the VariCam LT is the ideal camera for handheld, SteadiCam, jib, crane, drone, gimbal and overall cinema verité work. The VariCam LT offers a host of new features including an EF lens mount, hot swappable batteries, IR shooting capability, a 23.98 PsF output, cinema style file naming, and image presets such as scene files.