When FuseMedia (Aspen, CO) was founded a decade ago, it was among the first companies dedicated to the production of online video. According to Production Director Chris Macdonald, FuseMedia has been committed to creating "engaging, brand-specific, and emotionally packed" HD video as a marketing tool for business across the Rocky Mountain West, and has now moved into 4K production with its pur-chase of Panasonic’s AG-DVX200 4K large-sensor camcorder. 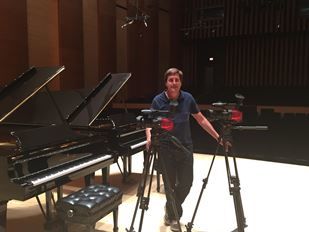 FuseMedia, honored with Emmy nominations for its cinematography and editing work, has an impressive portfolio of statewide clients, including the world-renowned Aspen Music Festival and Aspen Institute. Since late last year, the DVX200 4K handheld has become Macdonald’s primary acquisition tool, and he has used it to shoot a series of product and fundraising videos for the Colorado River District, (which pro-tects, conserves and develops the water resources of the Colorado River), as well as dozens of projects for the summer-long Music Festival and recently completed 2016 Ideas Festival.

Macdonald had previously worked with both an HDV camcorder and DSLR. “I needed to upgrade, and essentially was looking for a DSLR look built into a camcorder. Enter the DVX200.”

“Beyond the camcorder’s shallow depth of field and pleasing ergonomics, I liked the efficiency of the in-tegrated Leica lens, which as I work largely independently saves me considerable time,” he said. “The combination of the fixed lens, SD media and battery life hit a real sweet spot for me.”

“The DVX200’s image production can be cinematic, but the camera likewise excels at covering perfor-mances and seminars—it’s the best of both worlds,” he added.

Macdonald said that he plans to use the DVX200 on a documentary with a working title of “Colorado Art Beat,” which will profile ten of the most talented artists working in the state, and also to produce a second documentary about the reintroduction of wolves in Colorado.

The videographer predominantly shoots in 4K, but typically covers performances and lectures in 1080p; he edits in Final Cut Pro X.

“The DVX200 is a tool that completely fits what I do—which is consistently diverse,” Macdonald noted.