83 Days has also been named an official Selection of the 2019 International Houston Black Film Festival, where it will screen in March.

Director/Director of Photography Andrew Paul Howell chose the VariCam LT and AU-EVA1 for the production, which was shot on location in Eatonton, Georgia earlier this year. With a screenplay by Ray Lënard Brown and Summer Michele Howell, 83 Days adapts the true story of a 14-year-old African-American boy, George Stinney Jr., who in June of 1944, in a miscarriage of justice, was arrested for the murder of two white girls. He was arrested, tried, convicted and put to death within the film’s eponymous 83 days, “Junior” at 14 years remains the youngest person ever to be executed by electric chair in the U.S. He was exonerated in 2014.

Howell, a veteran DP of many period television dramas, had a proof-of-concept for a mini-series lined up when he met Brown, who told him about Stinney’s short and blighted life. Compelled to tell that story first, Brown, executive producer and screenwriter, signed Howell on as Director/DP. Howell undertook the 83 Days short as a proof-of-concept for a full-length feature. Principal photography on the 29-minute short was completed in 3 ½ days last June. This is Howell’s directorial debut.

Howell operated the VariCam LT with his longtime collaborator Brian Murie as Camera Operator/2nd Unit DP shooting with the EVA1. Howell had worked (as the DP) with the VariCam LT on the upcoming feature film, Freedom on our Mind. “We were working with a predominantly African-American cast in lower light conditions on that project,” he said. “The LT was simply amazing.”

“We really exploited the full scale of the LT’s potential on 83 Days,” Howell continued. “We made liberal use of the camera’s native ISO5000, sometimes shooting 2K at 120fps. That was an approach I used to get high-speed inserts for tight shots--for instance, with the execution scene, where we were trying to depict, nongratuitously, the violent death of a child.”

The Director/DP recorded 4K AVC-Intra 4:2:2 on the VariCam LT, shooting in V-Log. “ There is roughly 18% additional data recorded on the right and left of the 2:39 anamorphic frame; this additional data allowed us to record tracking marks for VFX or kept that area clear for horizontal frame adjustments—this was really helpful for left to right stabilization,” he said.

Howell and Murie both cited the EVA1”s small size and form factor as making it ideal for second unit work. For instance, Murie shot with the EVA1 on a Wooden Camera PL mount rigged inside a 1940s’ vintage sheriff’s car to capture the film’s opening sequence, where Junior’s father chases after the car that was taking his son away.

The EVA1 recording format was 4K Long GOP 10-bit 4:2:2. Both the LT and EVA1 were outfitted with Cooke anamorphic primes. 83 Days was edited in 4K in Adobe Premiere Pro. 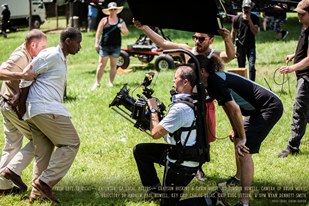 “The VariCam LT/EVA1 combo on this shoot was proof positive that these cameras represent an excellent and affordable platform for indie filmmakers,” Howell said.

About the VariCam LT

For more information about the AU-EVA1, visit https://na.panasonic.com/us/audio-video-solutions/broadcast-cinema-pro-video/cinema-cameras/au-eva1-57k-super-35-handheld or contact Panasonic at 877-803-8492.

Panasonic System Solutions Company of North America, a division of Panasonic Corporation of North America, delivers game-changing technology solutions that deliver customized experiences to drive better outcomes—for our customers and our customers’ customers. Panasonic designs and manufactures reliable, flexible and dependable products and solutions to help create, capture and deliver information of all types, especially where, when and how it is needed. The complete suite of Panasonic professional solutions for government and commercial enterprises of all sizes addresses unified business communications, mobile computing, security and surveillance, retail point-of-sale, office productivity, audio and visual systems (projectors, displays & digital signage) and professional video production. To learn more and Panasonic’s business products and solutions visit:https://na.panasonic.com.

About Panasonic Corporation of North America
Newark, NJ-based Panasonic Corporation of North America is a leading technology partner to businesses, government agencies and consumers across the region. The company is the principal North American subsidiary of Osaka, Japan-based Panasonic Corporation and leverages its strengths in Immersive Entertainment, Sustainable Energy, Automated Supply Chains and Connected Solutions to provide secure and resilient integrated solutions for B2B customers. Panasonic was highlighted in Forbes Magazine’s Global 2000 ranking as one of the Top Ten Best Regarded Companies for 2017. The ranking is based on outstanding scores for trustworthiness, honesty with the public and superior performance of products and solutions. Learn more about Panasonic’s ideas and innovations at Panasonic.com.