Filmmaker Andrew Rizer grew up in a military family, but his mom, who had a background in broadcast, always had cameras around the house. At a young age, he had a passion for making home movies but never thought it would lead anywhere. After serving in the military, he decided to pick up a camera again and began taking film and photography classes. “This was something I was passionate about and wanted to turn into a career,” said Rizer.

After getting married, Rizer and his wife decided to move to Hawai’i because they had been inspired by its beauty. When he first arrived, the video work he pursued was whatever could pay his more expensive Hawaiian bills. Currently, he works along the entrepreneurial independent filmmaker side, working with NGOs and small businesses, including MVMP - one of Hawaii’s oldest advertising agencies. According to Rizer, he gets the most satisfaction working with non-profits and mom and pop small businesses. 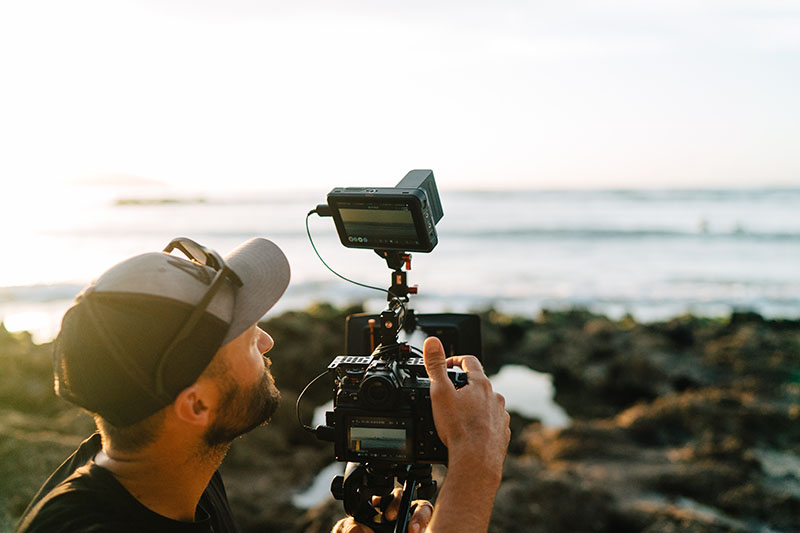 “It's a little bit of everything and very eclectic,” explained Rizer. “Being able to bounce around from commercial work to doc work to nonprofit, in order to fund my personal projects has been a joy.”

Nick Kuchar is an Oahu-based artist, who creates vintage inspired surf and travel art of his favorite Hawaiian locations. He gets his creative inspirations from paddling out at surf breaks and going on hikes throughout the islands. Rizer had owned some of Kuchar’s vintage travel prints and began working with him after meeting at a creative event. When the pandemic hit, they decided to create a video that would illustrate the warmth and depth of Kuchar’s work. “Nick’s work embodies a respectful and beautiful look at Hawai’i in its current state, but also the different iterations it’s been through,” said Rizer. “That really gave me my scope.”

For the look of the short documentary portrait, Rizer wanted the video to feel as if the viewer was looking at one of Kuchar’s art prints since he would be cutting back and forth between Kuchar’s work and his own footage. Rizer was also inspired by postcards of Hawaii and wanted the film to feel as if it were a real-life postcard, whether it was 50 years ago, or yesterday. “In Hawai’i, there are so many time capsules to the past, and I feel like I’ve been absorbing those things throughout my seven years here,” revealed Rizer. 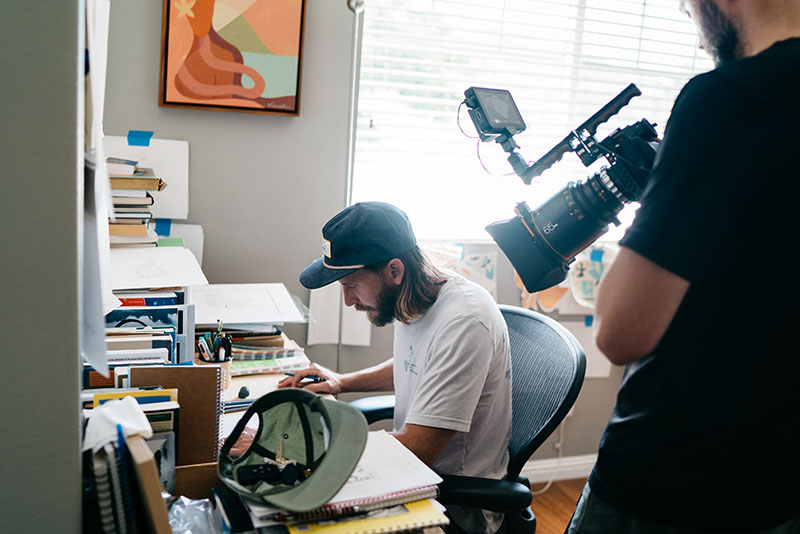 Shooting in Anamorphic with the S1H

Rizer always wanted to shoot in anamorphic and felt the widescreen format would be the most effective way to draw his work into the past, capturing a romanticized, nostalgic view of Hawai’i. Because he would be shooting primarily on his own, he needed a lightweight camera solution that would be ideal for shooting run-and-gun with anamorphic lenses, which are much larger and heavier than photo-style lenses.

Rizer shot Nick Kuchar with the LUMIX S1H and Atlas Orion 32mm, 50mm, 65mm and 100mm 2x anamorphic lenses. He used a Sigma MC31 PL lens adapter to mount the lenses to the S1H’s L-mount and gravitated to the 32mm and 100mm. “It was phenomenal to go through and utilize all those lenses,” revealed Rizer. “I felt like a kid in a candy store. The 100mm was a game changer because a lot of the footage we got was from sitting on the beach, on sticks, and Nick is paddling out to a surf break at sunset. Without the 100mm, we just wouldn't have been able to reach out and put the viewer next to him on that wave.” 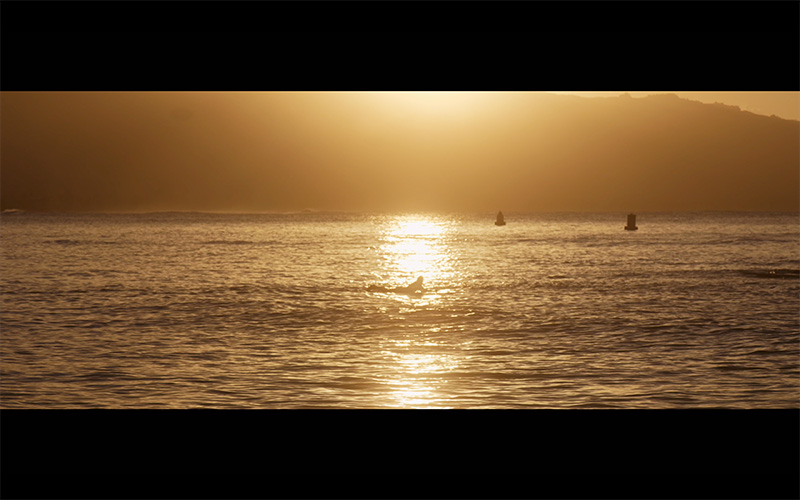 Screen grab of anamorphic frame of artist Nick Kuchar paddling out to a surf break at sunset, which Rizer shot with the Atlas Orion 100mm 2x anamorphic lens.

The S1H contains a native 3:2 sensor (35.6 x 23.8mm), allowing you to capture 6K/24p when shooting full sensor, or “open gate”. With the PL-mount Super 35mm Atlas Orion 2x lenses, Rizer used the S1H's 4:3 Super 35mm anamorphic mode for Super 35mm, which is more advantageous than a typical 16x9 cinema sensor. On a 16x9 sensor, a 2x anamorphic lens will give you a de-squeezed ratio of 3.56:1. On the S1H’s 4x3 anamorphic mode, a 2x anamorphic lens will have a de-squeezed ratio of 2.66:1 - ideal for widescreen capture since you're cropping less of the horizontal area of the sensor.

Rizer captured 3328 x 2496 (4:3), 23.98p, 422/10bit/ALL-I/400Mbps files in V-Log, and often captured 47.95p for slow motion. To monitor his footage, Rizer had an Atomos Ninja V, which he used strictly as a monitor rather than a recorder. With the S1H, he was able to monitor and frame his shots with a de-squeezed preview. He also used the S1H’s unique Anamorphic Stabilizer that lets you match your anamorphic lens for image stabilization. 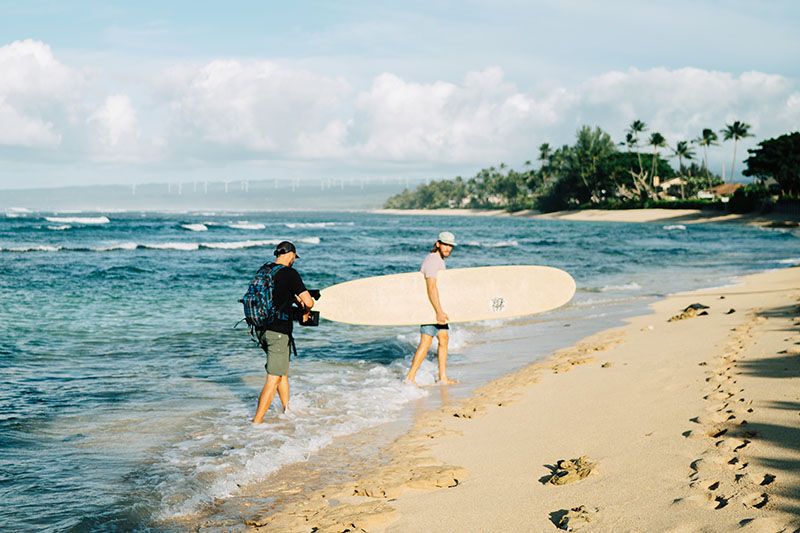 Working as a one man crew, Rizer follows Kuchar along the beach with his lightweight anamorphic setup

Working primarily by himself with his wife as a grip/production assistant, Rizer knew he wouldn’t have time, or resources, to light each scene, so he chose to shoot daylight exteriors with the beautiful Hawaiian sunshine as his source. “It really came down to scouting locations ahead of time and making sure that we were going to get the natural light we wanted. We were also really lucky because most of the indoor locations we were shooting at had big windows with natural light coming in.”

Rizer cut Nick Kuchar in Final Cut Pro and de-squeezed his footage in the timeline. “Once the footage was de-squeezed, it was the same process as any other normal project, as far as the edit and the grade," explained Rizer. "The one question mark was once I imported the footage, how can I get this to the format that I need it to be? And from that point on, it was a pretty standard procedure.” For his export, the full de-squeezed resolution would be 6652 x 2496 from 3328 x 2496. 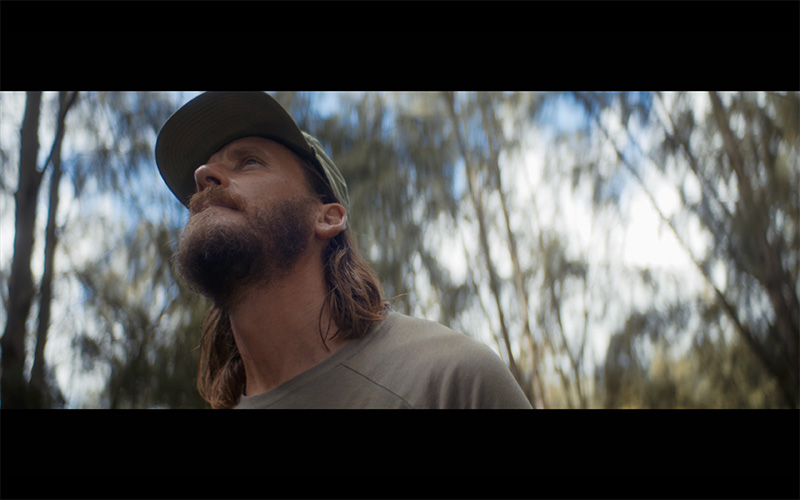 Capturing in V-Log, Rizer experimented with a number of different LUTs to obtain a more neutral look

For his color grade, Rizer kept the color consistent to Kuchar’s art to give it more of a cohesive look. Because he captured in V-Log, Rizer experimented with a number of different LUTs and was going for a more neutral look than stylized. “I was bringing the shadows slightly towards teal, a little bit towards green, and then warming up the highlights just a little,” he revealed. “Without too much work, it got me to the neutral and comfortable place that I was looking for.”

For Rizer, it was very satisfying to see the project come from sketches on a storyboard to real life footage. He felt the S1H was the perfect camera for running up the side of a mountain, through the woods, or shooting at a waterfall by himself with the kit and a tripod strapped to his backpack. “Hawai'i can be such a harsh environment,” explained Rizer, “but the S1H did everything that I needed it to do, which was awesome. I'm sure there are a lot of people viewing the video won't know the difference between anamorphic and spherical lenses, but if they can watch it and leave with a whisper, or a sense that the film feels just a little different, I think I accomplished what I was going for.”

Learn More About the S1H Become a LUMIX Integrator