Created 13 years ago with a friend, documentary filmmaker and camera operator Todd Moen created Catch Magazine, an online fly-fishing journal that highlights the best fly-fishing photography and video shot by contributors all over the world. The centerpiece of the magazine is a fly-fishing production that Moen films, edits and produces himself. For issue No. 75, to be released Fall 2022, Moen created a fly-fishing film shot on the historic Yamsi Ranch in Southern Oregon. For the short film, Moen captured fourth-generation ranch family member, Tom Hyde, as he pursued trout on the Williamson River’s crystal clear, 45-degree spring-fed waters amid a grasshopper hatch. Shooting with the new Panasonic HC-X2 camcorder, Moen captured the wild south-central Oregon landscape, handheld close-ups of rainbow trout, fast action sets and hookups, and 120-fps slow motion footage of hungry fish rising to devour grasshoppers during a late-summer hopper hatch.

Moen has built his entire production career around camcorders and for the past 15 years, he has only shot with Panasonic camcorders, starting with the AG-HMC150 to his current AG-CX350. One of the things he loves about Panasonic cameras is their dependability in extreme conditions. With his CX350, he recently shot in the brutal flats of the NW Coast of Australia, which reached temperatures of 120-degrees with high humidity. Moen has also shot in subzero temperatures and brutal, coastal-wet conditions in British Columbia without fail. He prefers the form factor of a camcorder over a DSLR, or mirrorless camera. “I just like the feel of them,” he said. “It feels more like a video camera. I think you must choose one or the other.” 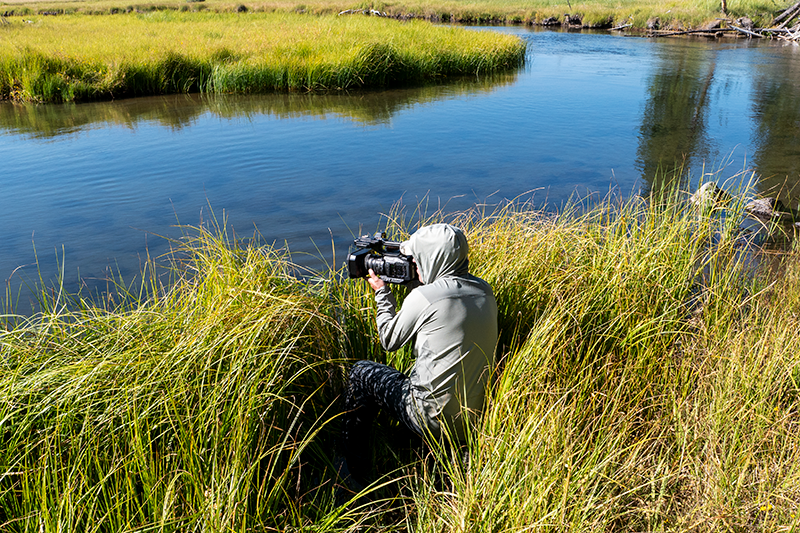 At the time of his shoot, Yamsi Ranch was having a once-in-a-lifetime grasshopper invasion. According to Moen, if you don’t have the insects, fish will not rise, and you won’t capture their explosive action on the surface. “It was one of those National Geographic type scenarios,” revealed Moen. “Grasshoppers were everywhere, with 20 to 30 flying right up in front of you with every step you took. To see how the fish were dialed into those insects hitting the water, it was a camera operator’s dream come true.”

Shooting With the New HC-X2

Moen felt the X2 was very similar to the CX350 with some new welcome features. “When I first pulled the camera out of the box, the first thing I thought was, ‘Wow, this camera is a lot like the CX350,’” he explained. “They’ve simplified the buttons on the side more, and the X2 has a larger menu dial, which makes controlling the menu system much easier. I really like what they’ve done with this camera.” 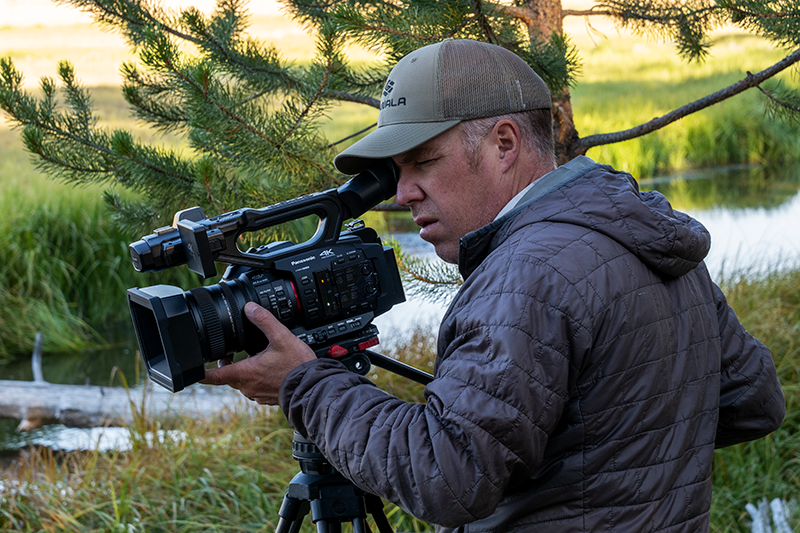 Moen looks through the X2's viewfinder to frame a shot.

Moen felt the X2 fit perfectly with his run-and-gun shooting style because when shooting in the wild, he often needs to be seconds away from making his next move, and the X2's 20x zoom lens gave him plenty of options. “I would be shooting antelope one second and then I’m shooting a tight shot using the lens’ macro function,” explained Moen. “You never know what’s going to happen with wildlife so being able to go back and forth within two or three seconds of each shot is essential. If I was trying to change lenses, I would have missed the antelope right in front of me."

For fly-fishing, Moen is typically shooting 50/50 between manual and autofocus. One feature Moen was impressed by was the X2’s new Fast AF system. “My target is a subject that normally you can't even see because it's underwater,” revealed Moen. “When a fish breaks the surface, I better have the shot. In those situations, I'm in full autofocus and the X2’s autofocus system is spectacular.”

Although it’s not new technology, the pre-record function is another essential camcorder tool that Moen depends heavily on. “It’s a complete game changer,” said Moen. “Back in the day, I’d have to roll tape for hours until something would happen right in front of me. It's a make-or-break feature and if a camera doesn’t feature pre-record, I won’t use it.” 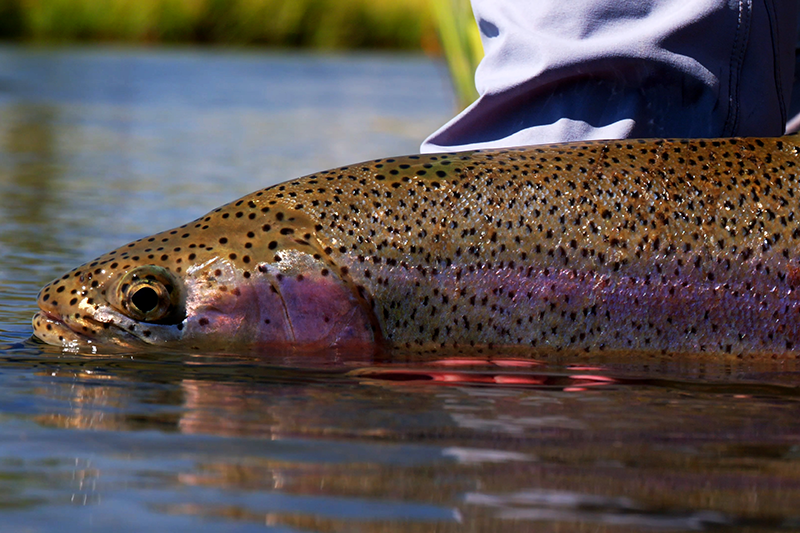 Compared with DSLRs, Moen was grateful for the X2’s internal ND filter system, which he used to cut light, or to manipulate his exposure. For Moen, internal NDs are a huge time saver since he doesn’t need to carry ND filters for each lens, nor does he need to clean each one. He always employs a circular polarizer to cut glare on water surfaces.

When a fish breaks the surface, I better have the shot. In those situations, I'm in full autofocus and the X2’s autofocus system is spectacular.
Filmmaker and Catch Magazine's Todd Moen

According to Moen, the X2 is an extremely versatile camcorder and can be used for several different applications – from a documentary filmmaker doing an interview to action sports camera operators. “Because of how durable it is, it’s a no-brainer for someone who will get their camera a little dusty,” he explained. “I do endless belly crawling to get into place on these rivers and creeks, and you can't spook the fish. I think the X2 is really for the person who is up against the wall on time for setup. Also, how much time they need to switch gears on weather, and what environments they will shoot in.”

Even though it was his first time using the X2, Moen was quite pleased with how the project turned out. “I was using that long lens for wildlife shots,” he explained, “but then I was also chasing grasshoppers around in the grass and shooting within a foot from the lens using the macro function in the menu. We had great wildlife that showed up for us and I was able to use a lot of the functionality of the camera. It was great!”

For more information on Catch Magazine and Todd Moen, visit the website here, or his YouTube channel.