With creativity and an open mind toward eco-friendliness, green living can take on many forms. This thought-provoking article looks at the environmental benefits of going green, conservation, waste reduction, and how progressive cities are doing it differently.

More than half of the world’s population currently lives in cities, while projections show an increase to two thirds by 2050. Many people living in small areas means large amounts of waste, high resource consumption and loads of energy use. We can combat these issues with the ideas behind the circular economy.

If we were to envision our cities as circular cities, how would they look? Green. And why? Because achieving a circular economy means using nature as a template. With the help of green infrastructure, we can take nature as the example and transform our cities into circular cities. 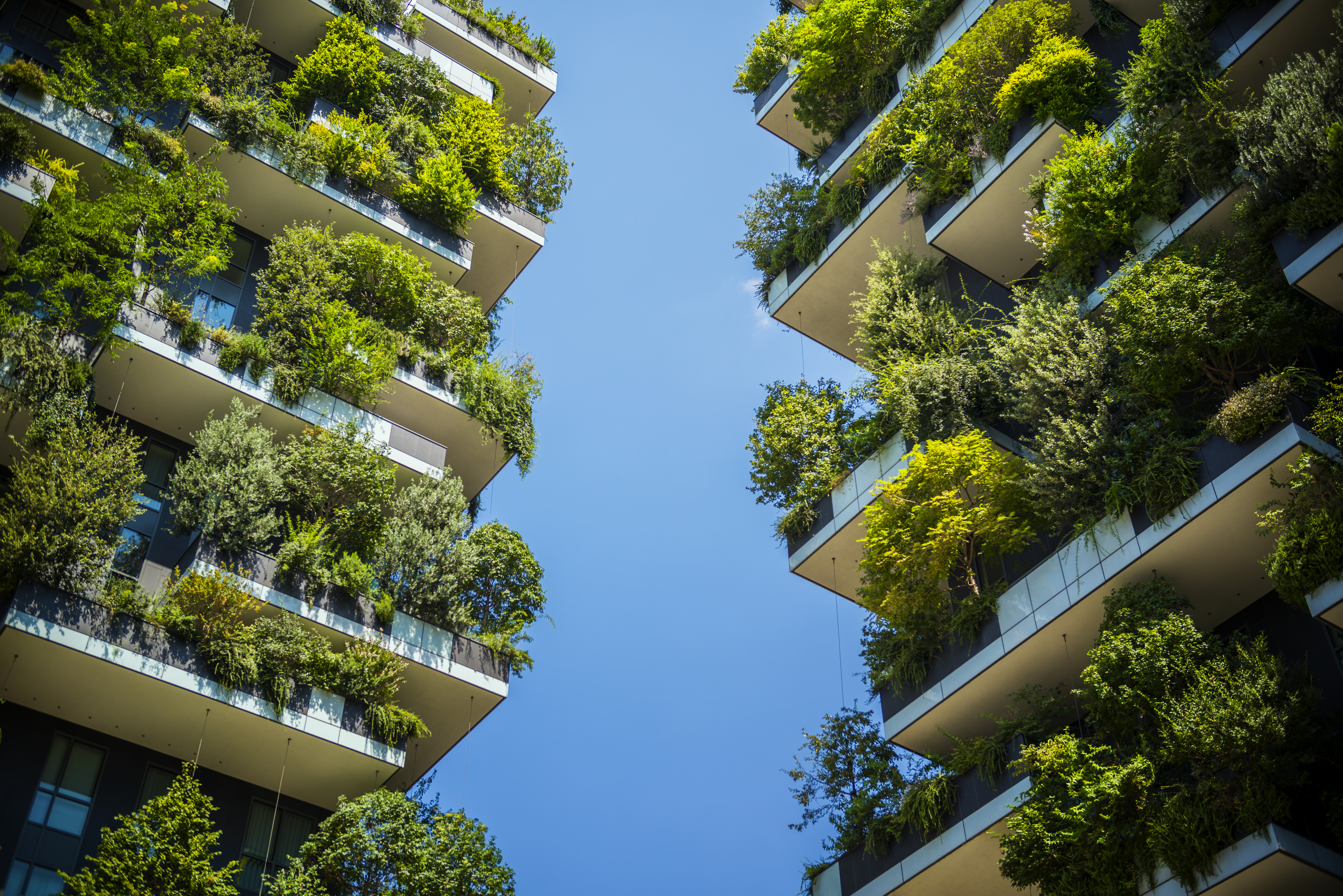 Achieving a circular city means ensuring the mitigation of waste. Green infrastructure reduces waste in the construction industry by increasing the longevity of exterior surfaces. With greening, roofs survive longer against harmful weathering and intense sunlight. The lifespan of conventional flat roofs can even be doubled with greening. As one city with a long tradition of greening roofs, Berlin even has green roofs reaching approximately 100 years in age.

Green facades also play a similar role by reducing the maintenance requirements of conventional facades due to the protective layer against sunlight and high temperatures. By using these nature-inspired measures in green infrastructure, cities reduce waste in the construction industry and become more circular. Making our buildings last longer means less waste and helps us approach the idea of circular cities. 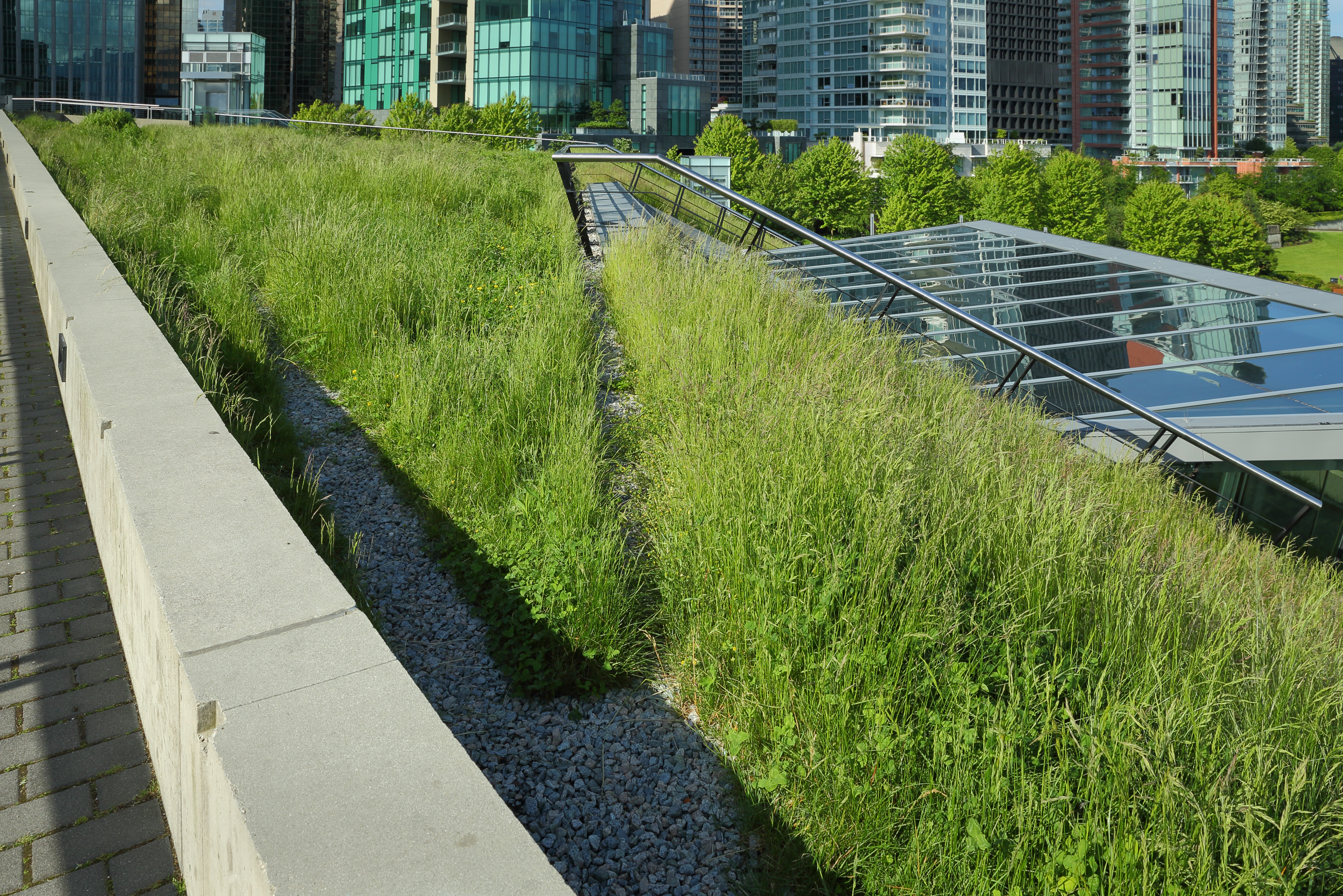 Seeing storm water as a resource

One of the key roles that green infrastructure plays for cities is in the management of stormwater. When it rains, storm water runs off sealed surfaces and is conveyed to wastewater treatment plants. During heavy rainfall events, the treatment plant’s capacity may be exceeded. This can cause combined sewer water and storm water to flow directly into rivers, severely degrading the quality of the water.

Although newer sewer systems allow for the separate conveyance of storm water directly into the rivers, the runoff from streets and sealed surfaces still washes pollutants down to the rivers as well. Green infrastructure reduces the amount of runoff to rivers by acting like a sponge. In Brooklyn, New York, a “sponge park” will help clean up the long-polluted Gowanus Canal. In China, the “sponge city initiative” focuses on helping cities to absorb more rainwater to mitigate flooding, increase the water supply and reduce pressures on the municipal treatment systems. Reducing and reusing runoff not only mimics nature’s own circular way of dealing with rainwater, but also reduces energy consumption at the wastewater treatment plants. 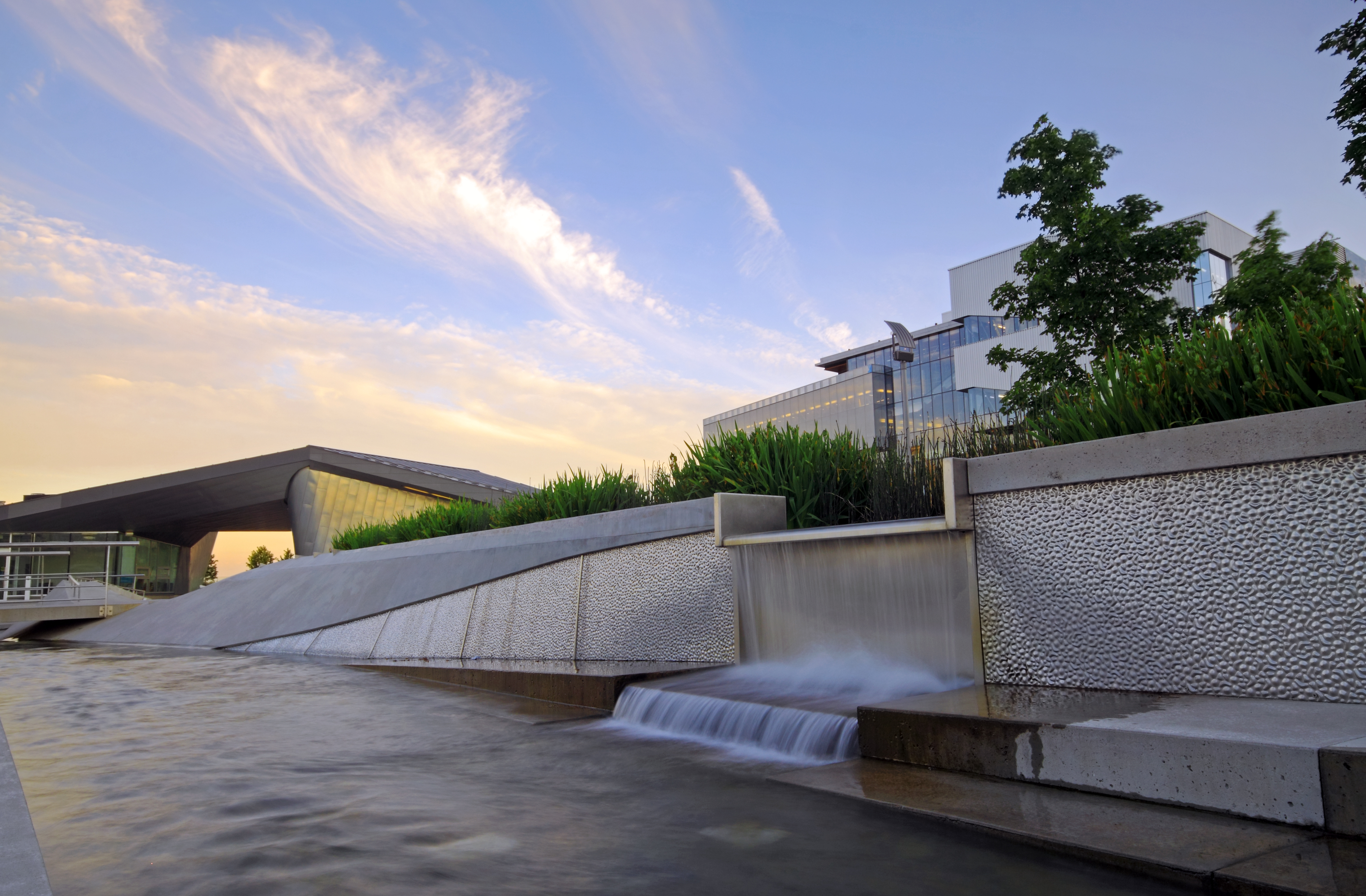 Many cities have already taken great strides in addressing storm water in a circular fashion. In Berlin, for example, one section of Potsdamer Platz with 30,000 square meters features an entire system of connected green roofs, urban spaces, and a constructed treatment pond for handling storm water. By naturally treating water in the pond, very little energy is needed to clean the water, which is then reused for irrigation and flushing toilets. Toronto has even made green roofs obligatory since 2009 in order to manage stormwater, and Malmö’s Bo01 Development even incorporates 100% renewable energy while also handling and treating all the storm water sustainably.

Reducing energy consumption at treatment plants is just one way in which green infrastructure can aid in mitigating greenhouse gas emissions. Green roofs and facades act as an extra source of insulation and protection against temperature extremes: reducing indoor temperatures in the summer and increasing temperatures in the winter. As 40% of the total energy consumption in the EU can be attributed to the building sector and over a third of greenhouse gas emissions originate from buildings, reducing the heating and air conditioning could play a large role in cities’ efforts to mitigate climate change. 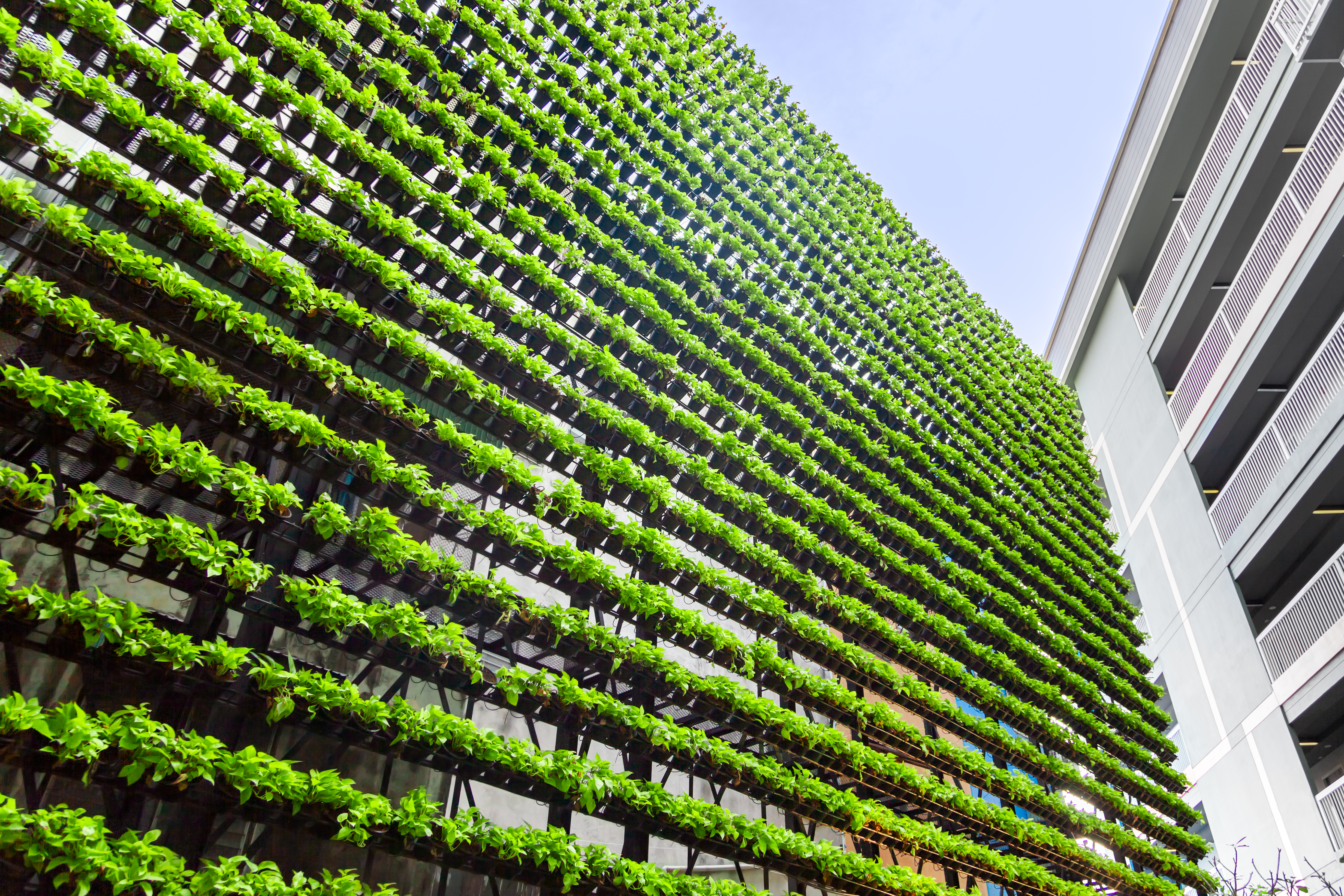 Besides reducing energy consumption and subsequent greenhouse gases, green roofs and facades also sequester carbon dioxide and assist in the uptake of air pollutants such as nitrous oxide, sulphur oxide and particulate matter, the pollutants for which the guidelines from the World Health Organization are often not reached in cities.

Furthermore, increasing the green in cities combats the urban heat island effect and protects human health. For example, at Potsdamer Platz, the summer temperatures are kept 2°C cooler than other surrounding areas. 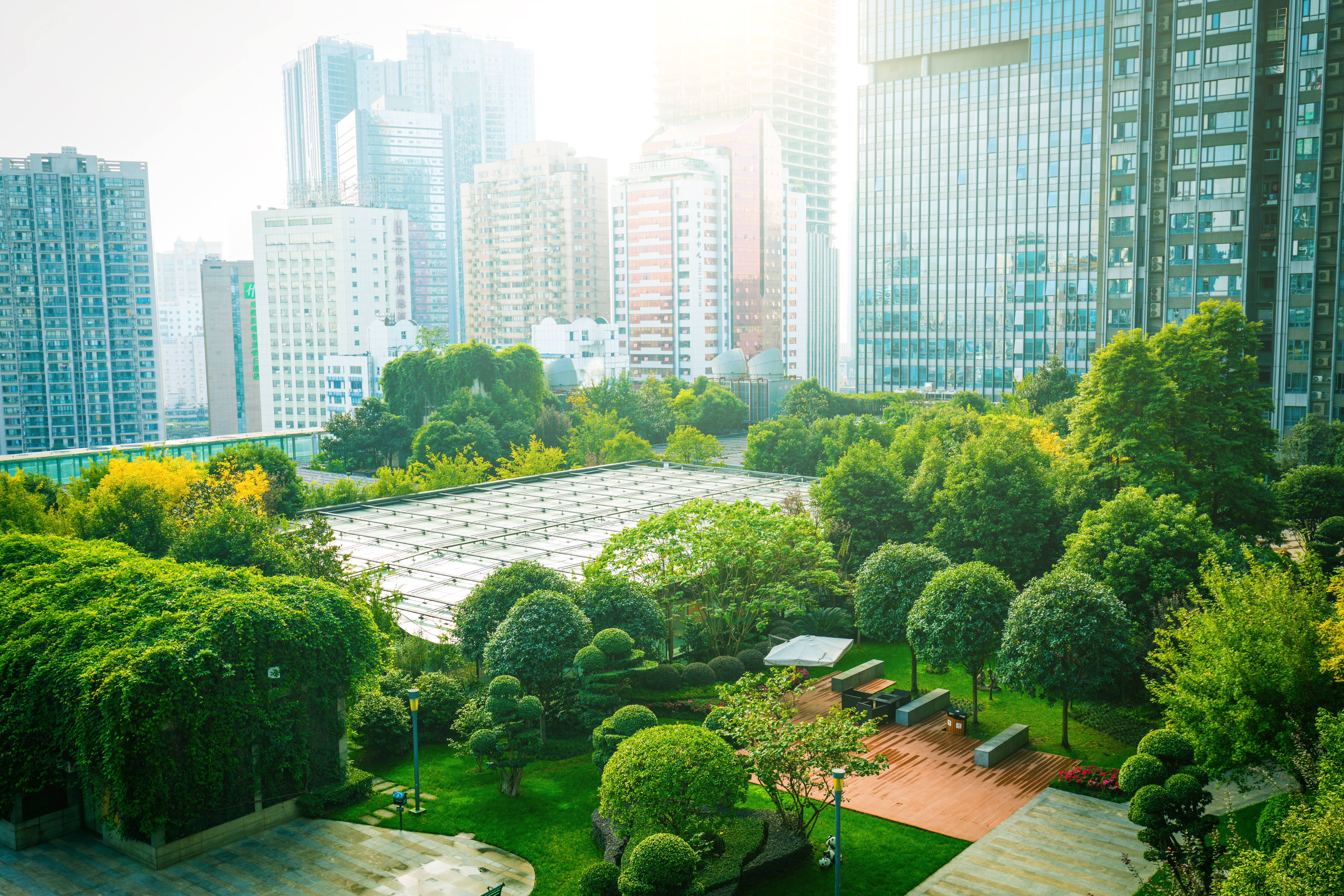 Considering the numerous benefits, it is clear that cities investing in green infrastructure become more circular and tackle several issues at once. Studies have already shown how economically the benefits do outweigh the costs of such systems, and it is obvious that there is much to gain in mimicking nature and transitioning to circular cities of the world.

This post was originally published on The Conversation. Daniel Johnson is PhD Candidate – Chair of Environment and Economics and Coordinator of Research Center SustBusy at ESCP Europe.

This article was written by Daniel Johnson from Fast Company and was legally licensed through the NewsCred publisher network. Please direct all licensing questions to [email protected]