Heating and powering a home are major energy hogs. But can smart devices communicate with each other to create smart buildings that reduce energy usage? This insightful article by the Construction Journal delves into how smart technologies, IoT, wireless communications and apps are molding the future of eco-friendly construction.

To understand how to increase the potential of smart buildings, we need to define what "smart" means. The word is used everywhere these days – in smartphones, smart meters or smart fridges, for instance – but what it signifies is not always understood.

A smart device is, at its core, one that can communicate. Such devices are typically interactive and, to some extent, autonomous, and they communicate over a wireless protocol such as Wi-Fi, 3G or Bluetooth. This sounds simple, but it has opened up a world of opportunity both inside the home and outside. Some smart devices are already in use while others are on their way, and it is clear that smart technology is only going to proliferate.

The network of such devices as a collective has become known as the Internet of Things, and it is estimated that more than 8bn connected devices of some kind were in use by the end of 2017 around the world. Smart TVs, smart lighting and smart heating controls are already in domestic use, while smart locks and fridges are beginning to appear, particularly as some of the major players become involved.

Google, Amazon and Apple are all staking a claim to be a central point of control for domestic devices, but the value of smart technology lies in more than just controlling music with vocal commands.

In the average home, space heating, hot water, lighting and appliances are the major energy uses (see Figure 1), although in the future this may change, as consumption for applications such as mechanical ventilation, air conditioning and electric vehicle charging may increase. 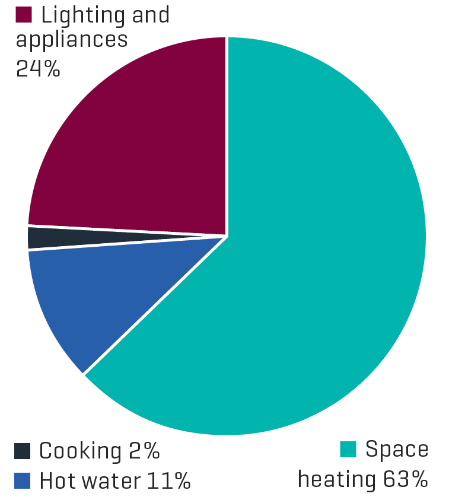 With space heating and hot water making up such a large proportion of energy use, there is a significant opportunity here for energy saving, and there is already healthy competition in the smart heating control market. Nest, Hive, Honeywell and Heat Genius are just a few of the names in this sector, some of them backed by major brands such as Google and British Gas, but there are more than a dozen providers in the market with offerings of different levels of control and automation.

What they have in common is control by app: the ubiquity of the smartphone means that we no longer need design complex control systems as they will sit unused next to the boiler, as everyone can control their heating from the advanced computing device in their pocket.

Some controls include more automation and algorithms that try to learn your behavior and optimize the heating system control accordingly. For example, Google's Nest gets to know the temperature you like when at home and turns itself down when you are away, while Heat Genius uses room-by-room sensors to learn your occupancy habits and heat individual rooms appropriately. So the use of such facilities should be a consideration when thinking about the future of construction.

The development of smart heating is giving consumers more power over the energy they consume, as well as making their patterns of consumption more visible. While a system might be set up with a standard control pattern – on in the morning when the household wakes up, off during the day when occupants are at work or school, and then on again in the evening when they return home – its value lies in its ability to adapt and learn from users' behavior.

So if we know we can save on our heating use, what can we do for our electricity consumption? We still need to use lighting in the evening when it gets dark and we have increasing numbers of electronic appliances that require charging. At the same time, household renewables such as solar photovoltaic (PV) panels do not produce energy on command. The first stage, then, is understanding the profile of our current energy use.

From Figure 2, we can see that much of the value of domestic power generation is lost as it is exported to the grid – shown in yellow – rather than consumed within the property – shown in grey. However, this is an average representation and does not necessarily represent a real household, whose usage may be better demonstrated by Figure 3. This shows what happens in a household that is empty all day. Only background devices such as fridges are consuming the electricity generated by the solar panels, and the majority is exported to the grid.

To optimize the use of energy in the house, thereby decreasing energy costs and avoiding the local grid issues that can be caused at times of peak PV export, modern construction design needs to consider energy storage. The addition of a battery would allow a smart home control system to load-shift; that is, to charge a battery for use later with cheap solar-generated energy. Battery companies such as Moixa now offer smart control of their storage systems to maximize the amount of free or cheap energy that can be stored for later use.

We have seen that smart buildings are here, so we return to our original question – how can we make smart buildings smarter? There is only so much that can be done in any single building, so the answer is connecting communities.

When you increase the scale of a smart control algorithm from the individual home to a local community of hundreds of homes, the opportunities increase again. When averaging demand from a number of properties, you smooth out peaks in local demand. Solar photovoltaic panels on one property generate electricity that may not be used in that house, but connecting communities enables that surplus to be used by neighbors instead. Other opportunities include the ability to aggregate energy storage across a community and monetise this by providing services to the local electricity network or to National Grid.

Encraft, which works with customers to construct low-carbon buildings, energy-related digital technologies and local energy systems, undertook an Innovate UK-funded project called Optimizing Regional Cluster of Smart Energy Networks (ORCSEN) to investigate the opportunities that smart control offers a community. The project involved modeling an area of construction in Wolverhampton, including 236 houses and a nearby business park, with a significant proportion of renewable generation such as heat pumps as well as smart appliances, electric vehicles and energy storage.

The smart control algorithm optimized energy flows across the community against local grid constraints, minimizing the export of electricity generated in the community over the summer and reducing winter evening peak electricity demand by 25%.

In future, it should be possible to monetise benefits such as these, as local distribution network operators begin to play a more active role in local network management. In this case, the benefits from the residents' perspective include a reduction in average electricity bills by 9%, demonstrating the advantages to multiple parties from such a system. For housing developers, this approach could also present an opportunity to reduce infrastructure costs while offering an attractive sales proposition for future residents of the community.

We have discussed domestic smart energy control and community connections, but there is no reason to stop there. The future smart home could sit in an 'ecosystem' of smart control, talking to every other home, the community and large industrial plants and generators, as well as dynamically responding to constraints at local facilities such as substations, as the ORCSEN project was able to do. When the wind is blowing and turbines are generating significant amounts of energy, for instance, signals could be sent for electric vehicles to charge, and they would then use this stored energy when margins of supply are tighter. So the future of construction is in connectivity.

Archie Corliss is Lead on Energy Storage at Encraft

This article was written by Archie Corliss from Construction Journal and was legally licensed through the NewsCred publisher network. Please direct all licensing questions to [email protected]