Cities are getting hotter, but we can redesign them to keep us cool

Cities are getting hotter, but we can redesign them to keep us cool

As temperatures get hotter, cities feel the heat more than suburbs and rural areas. This article by Co. Create sheds light on clever solutions major metropolitan areas are testing to beat the heat, combat warmer climates and stay cool.

If you bike down a street on the edge of Los Angeles’s Echo Park neighborhood, you’ll see a sudden change in the pavement on one block, where the black asphalt shifts to white. A little over a year ago, the city covered the street with a special coating – light in color, so it reflects the sun – as part of a plan to help cool L.A. As the world keeps getting hotter.

Like most cities, L.A. Is facing more frequent and extreme heat waves. One new study that mapped out rising heat across the country found that if greenhouse gas emissions continue on their current path, the average number of days in a year across the U.S. that feel hotter than 100 degrees will more than double by the middle of the century. 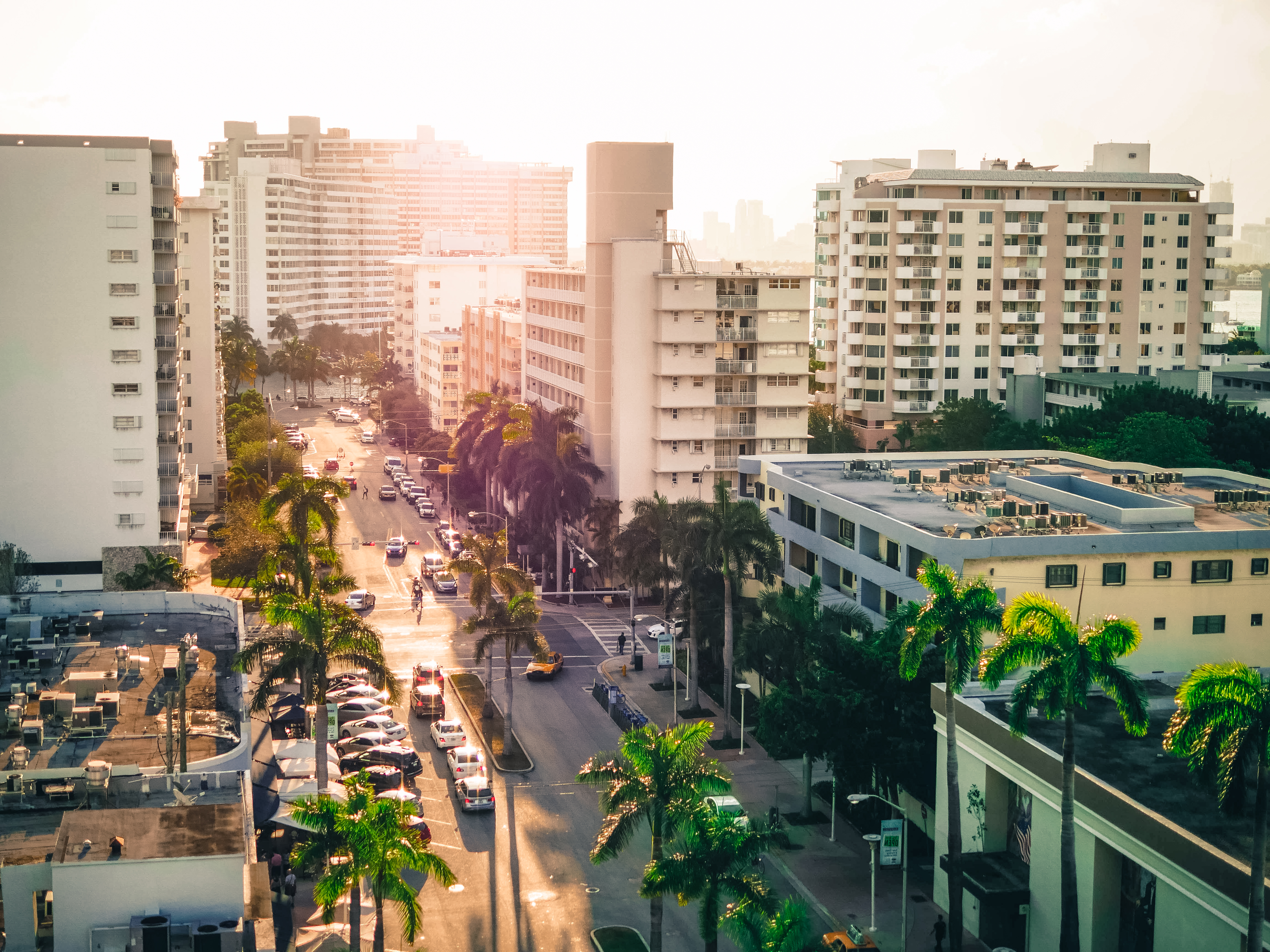 Some cities will have it worst: In Miami, by the end of the century, 153 days each year could feel that hot. Globally, cities that were relatively cool in the past are beginning to grapple with buildings that weren’t built for heat (like Berlin, where the average high in June is 72 degrees, but climbed to 101 degrees one day last month, the hottest June on record for the planet). Cities also suffer from the urban heat island effect: Hot temperatures get even hotter as pavement and buildings soak up and release radiation from the sun.

There are several ways cities can prepare for extreme heat, from changes in infrastructure – like solar and battery “microgrids” that can keep air conditioning on at cooling centers if the heat takes the grid down – to shifts to different cooling technology, like geothermal power. But three solutions are both particularly simple and particularly helpful. “We need to reduce greenhouse gas emissions,” says Matt Petersen, president and CEO of the Los Angeles Cleantech Incubator and the former chief sustainability officer for the City of L.A. “That’s job number one, for long-term benefit to reduce the most extreme heat from happening. But now that extreme heat is here, we need to make sure we put in place strategies to reduce the new normal of extreme urban heat through cool streets, cool roofs, and robust urban tree canopy.” 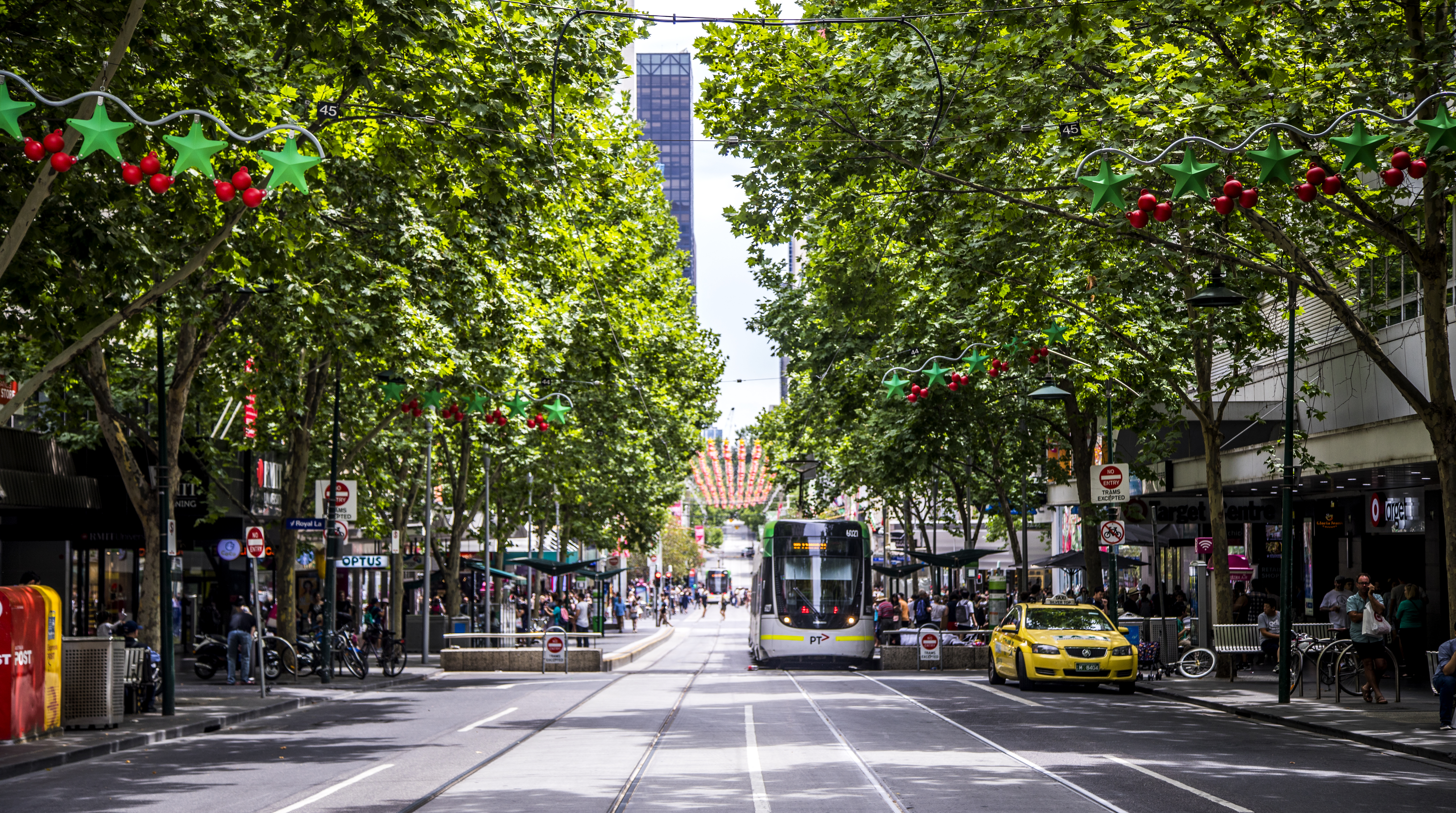 Covering cities and building with trees

Cities like Melbourne are mapping their street trees and carrying out massive tree-planting efforts. Melbourne plans to double its canopy cover by 2040. Milan plans to plant 3 million trees. There are multiple benefits, but one is simple: As trees shade streets, and water evaporates from their leaves, they cool neighborhoods.

In Dallas, one program mapped the areas of the city that were hottest because of a lack of trees, and then started planting them on key pedestrian routes, like the paths that students take to school. Madrid embarked on a plan in 2016 to begin planting greenery wherever space is available. In some cases, greenery is going directly on roofs and facades. In Milan, the Bosco Verticale (“Vertical Forest”) building is covered with trees on balconies. “We designed the balconies to accommodate really significant green infrastructure,” says Brian Swett, director of cities and sustainable real estate at the engineering firm Arup.

In New York City, the city has coated more than 10 million square feet of rooftops with a white, reflective coating over the last decade. The coating helps lower temperatures inside buildings, helping people feel more comfortable and use less air conditioning; like cars, air conditioners are both another major source of emissions and make cities immediately hotter as the machines vent heat outside. Green roofs can play a similar role in cooling buildings, and at a larger scale, neighborhoods. “From a city perspective, a roof garden on a single building isn’t going to move the needle, but when you do it in aggregate, it can have massive impact,” says Swett. 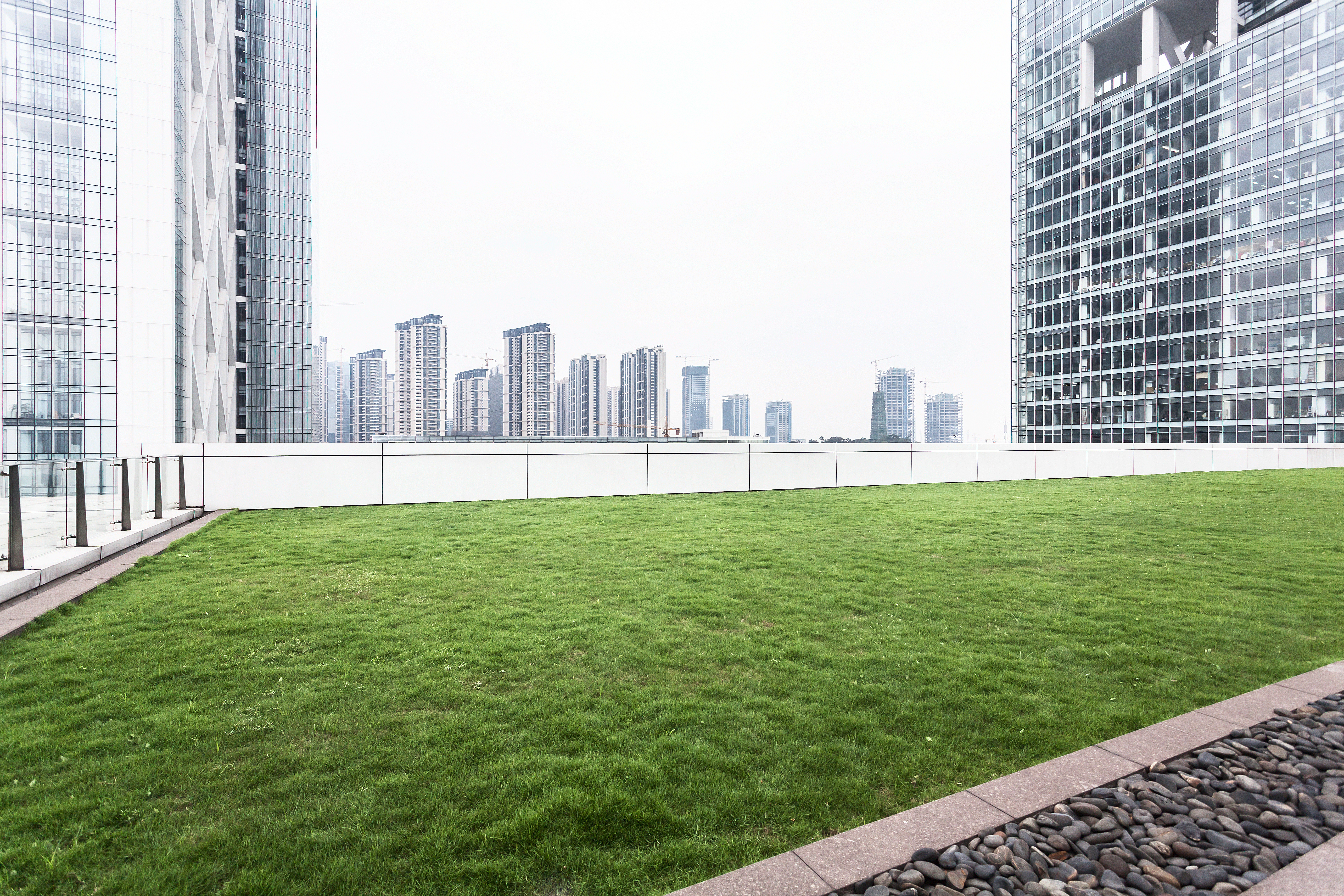 Tokyo has coated miles of streets with cool pavements. Other cities have tested pavement that allows grass to grow through the surface, another way to keep it cooler. In L.A., the city is working on a combination of cool roofs, tree-planting, and cool pavement. “We see up to 20 degrees Fahrenheit difference, sometimes, between the cool streets that have been surfaced and regular black pavement,” says Petersen. The city, he says, helped spark manufacturers to start developing new street coatings to help with heat. “It’s another example of where policy market signals are driving product innovation,” he says. The incubator is now testing multiple new coatings in its parking lot.

Green and “cool” roofs and facades are one way to keep temperatures down inside buildings, but there are other ways to cut the need for air conditioning. Automatic shades can cover windows when the sun shines directly on them – in an office building, this might happen early in the morning before employees come to work. Automatic windows can open at night, when sensors detect that temperatures are cooler, and then close before it warms up.

Material choices also keep buildings cool. The thermal mass of concrete, for example, means that a building can be cooled in advance of a heat wave. “If everybody’s turning on their air conditioning at the same time, that stresses out the grid and leads to brownouts and power outages,” says Swett. Since extreme heat is predictable several days in advance, a building with thermal mass can be cooled before the heat hits and then stay cool without stressing the grid. As it works on building designs, Arup uses tools to predict how the building will react in future climate conditions. 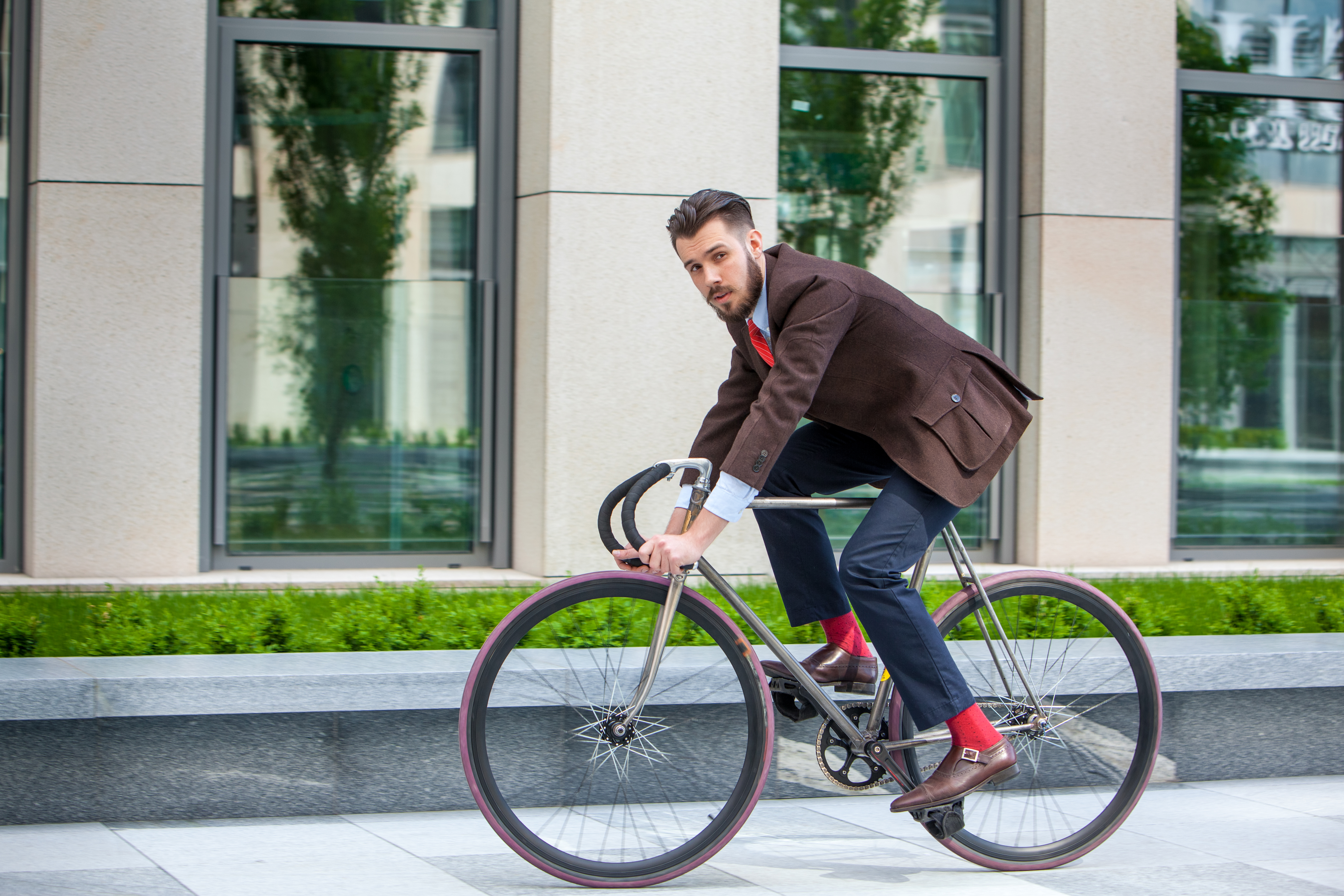 Rethinking the shape of the city itself

Beyond just changing the built environment, cities can cool down by rethinking how people get around them. As cars spew greenhouse gas emissions, they also emit waste heat, making cities even hotter on hot days. The existence of the car also led to sprawling streets and parking lots covered in pavement that raises local temperatures.

“Post-World War II, we ended up developing very different kinds of zoning strategies where we started separating uses – large swaths of single-family residential [buildings] that [are] isolated in one location, or industrial or retail,” says Stephen Coulston, principal at the architecture and design firm Perkins and Will. “It disincentivized what maybe was a little less vehicular-centric activity in the past, which was connected, walkable places where you could live in a place and walk to a corner market and walk to a retail center and not have to get into a car.” Cities that incentivize less driving – whether by redesigning bike lanes and sidewalks or changing codes to make new developments mixed-use and near public transportation – can cool themselves down.

This article was written by Adele Peters from Co. Create and was legally licensed through the NewsCred publisher network. Please direct all licensing questions to legal@newscred.com.

Most believe solar power is only an eco-friendly renewable energy source. Here's a look at the bigger, not-so-obvious upside.
Learn more
Sustainability & Environment

Water-saving actions we can take to effect even modest changes to help the planet and your wallet.
Learn more
Trends & Technology

10 Tips For Adding Biophilia Features And Benefits To Your Home

A look into the art of biophilic design, which blends architecture and natural elements together to provide a positive effect on our well-being.
Learn more
Trends & Technology

Why Homeowners Benefit from a Total Home Energy System

With solar and battery storage costs dropping, the US could be predominantly powered by renewables sooner than originally thought.
Learn more
Sustainability & Environment

How EverVolt Makes Your Home More Efficient With or Without Solar

Solar power and battery storage are increasingly being embraced as a way to lower your energy bills and create a more resilient home energy system.
Learn more
Sustainability & Environment

Is net zero achievable? Find out in this interview with the authority on net zero buildings.
Learn more
Trends & Technology