AU-EVA1 5.7K Handhelds Deployed on Dolly and Jib for Capture of Wide Shots

Flatirons Community Church (Lafayette, CO), ranked by Outreach magazine as the 11th largest church in the United States, has upgraded to Panasonic VariCam LT cameras with CineLive, as well as AU-EVA1 5.7K handheld cameras, for live production of weekly worship services. In partnership with Summit Integrated Systems, the church invested in a total of seven VariCam LTs and two AU-EVA1s in a large-scale replacement of their video system.

With its main broadcast campus in Lafayette, Colorado, Flatirons regularly sees more than 18,000 attendees per weekend over its five campuses, plus online live broadcasts on Facebook and YouTube. The church’s satellite sites are located in Denver, Aurora, Longmont, and Golden.

Flatirons’ 168,000 sq.ft. Lafayette venue houses the main auditorium, which can hold 4,300 people, plus overflow in the lobby of up to 2,000 people. This location’s 9 a.m. and 11 a.m. Sunday worship services are broadcast live to satellite campuses, social media platforms and the church’s website. Typical weekend services feature modern worship music, alongside a Biblically-based spoken message. The music is not limited to conventional worship songs, but includes secular songs by popular bands such as Imagine Dragons, Foo Fighters, Muse, Coldplay and more.

Robb MacTavish, Flatirons’ Live Production Director, said that the move to the VariCam LTs with CineLive has resulted in “more cinematic, modern worship experiences that appear highly post-produced but are, in fact, live.” 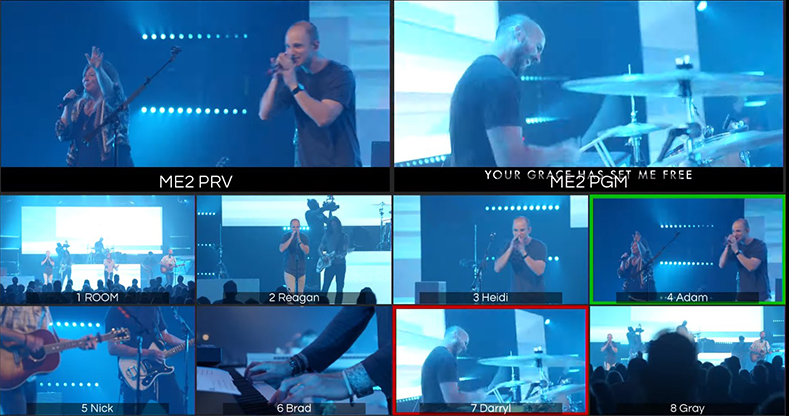 “Flatirons is proud of its legacy of cinema cameras being used in live production, which dates back to 2013,” MacTavish said. “A main driver behind our investment in the VariCam LTs was the requirement for minimal latency due to a switch from projection to ROE LED displays for IMAG, which added about two frames of latency into our new 1080/59.94p workflow. With the new setup, we’re only experiencing four frames of latency end-to-end (two frames from our cameras and two frames from our LED displays).”

“The VariCam LTs are especially feature-rich; beyond the cinema look and feel, and low latency from the camera’s clean feed, we also utilize the ability to switch frame rates in-camera,” he continued, noting that worship productions deploy the 1080/59.94p format for a more lifelike teaching experience, with an effortless switch to 23.98p for a filmic rendition of musical performances.

MacTavish added that teaming the VariCam LTs with Panasonic’s AK-HRP1000 Remote Operating Panels “puts professional grade, tactile control of the cameras in the hands of our shaders, allowing camera operators to concentrate on shot composition and movement.”

“Also, we make extensive use of the ‘dirty’ feed out of the camera to relay on-screen menu detail to our shader positions, with a clean feed going to the switcher.”

The VariCam LT and AK-HRP1000 combination is referred to as CineLive and allows complete control and shading of the camera from the control room. While the CineLive system is capable of 4K internal recording and live HD output, Flatirons currently utilizes the 1080p output to interface with two 24’ by 12’ LED screens and broadcasting services. MacTavish anticipates a future upgrade to 1080/59.94p HDR production as Panasonic’s feature rich technology continues to evolve.

In terms of VariCam LTs’ placement in the main auditorium, Camera 1 is a locked down stage wide-shot, Camera 2 is on the center line 78’ from the stage, Camera 3 is a slash camera used for angle shots from Front of House right, Cameras 4 and 5 are placed approximately 24’ from the stage for angle shots from the left and right, and Cameras 6 and 7 are used handheld on stage left and right for close-ups of musicians and instruments. One AU-EVA1 is used on a 21’ dolly track at Front of House, and the second is used on a jib that is placed in various locations throughout the auditorium.

MacTavish said that the AU-EVA1s were providing cost-efficient capture of wider shots, with ease-of-use for operators and versatile iPad control for live shading.

Panasonic has delivered excellent support throughout the upgrade process and has worked closely with us to fine tune our camera configurations and color space.
Robb MacTavish Live Production Director

MacTavish supervises four full-time staff, who oversee all aspects of the live weekend worship experience (except audio).  “However, 98% of our operators are volunteers, and training on these latest Panasonic cameras was simple,” he added. “Panasonic has delivered excellent support throughout the upgrade process and has worked closely with us to fine tune our camera configurations and color space.”