The Show Goes On:

The 2019-2020 season marked Cincinnati Symphony Orchestra’s 125th anniversary, and the 52-week full-time orchestra had planned numerous programs throughout the year to commemorate the significant milestone. Performances for in-person audiences came to a halt in March when social distancing measures were put into place. Seeking ways to continue safely performing, Cincinnati Symphony Orchestra pivoted to outdoor performances with smaller groups of musicians. As the situation evolved, it became clear that, at least in the near term, it would be necessary to produce and stream digital content in order to reach larger audiences and keep the music playing.

“Like many of our peer orchestras, we had to pivot overnight to come up with a digital strategy for our performances,” said Heather Stengle, director of operations at Cincinnati Symphony Orchestra. “This is the first time we have self-produced our own video content. Previously, we always partnered with a television station or network because we didn’t have the in-house capabilities. Over the summer, we tested several equipment options, and after our July 4th live-streamed concert we had a pretty good idea of the direction we wanted to pursue.”

With a digital plan in place, the Orchestra began exploring solutions that could authentically replicate the concert experience virtually while capturing both the grandness and nuances of orchestra performances. 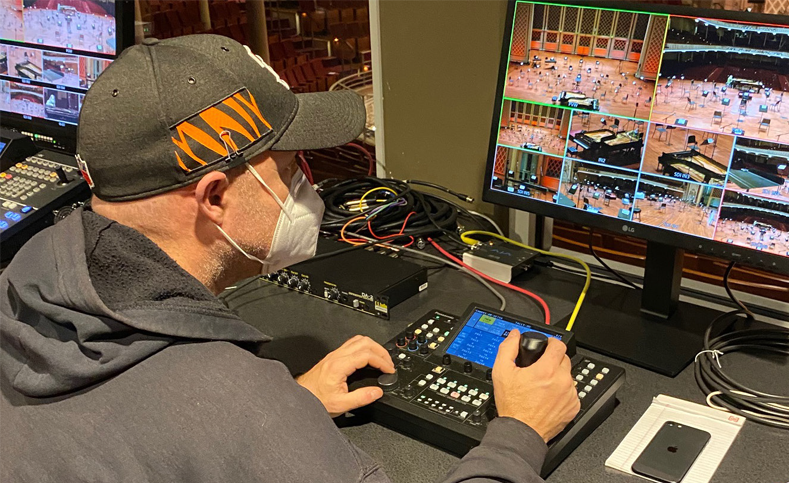 “The quality and performance of Panasonic’s PTZ and switcher solutions allow us to closely replicate the concert experience to our audiences virtually," said Stengle. "Not only do the PTZ cameras enable our production team to capture the full spirit of the orchestra, but the controllers and switcher offer greater camera control and creativity of the shots and angles we are able to capture.”

The image was the best we saw. The orchestra was so realistic. The clarity, the color, the look of the musicians was far better on Panasonic’s UE150 PTZ cameras than the other cameras we tested.
Heather Stengle, Cincinnati Symphony Orchestra | Director of Operations

After experimenting with PTZ cameras during two summer concerts, Cincinnati Symphony Orchestra began ideating creative ways to broadcast their performances and decided to search for a professional camera system that could fully execute their vision.

The Orchestra selected Panasonic to provide its AW-UE150 4K/UHD 60p PTZ cameras to help virtually recreate the immersive musical experience their fans have come to know and love in-person. Thanks to Panasonic’s swift delivery and intuitive equipment setup, Cincinnati Symphony Orchestra was able to install the new camera system within a couple weeks in time for its first September rehearsal.

With the UE150's wide viewing angle (75.1 degrees, horizontal), large 1" MOS sensor and 20X optical zoom, the Orchestra is able to unobtrusively capture and provide a more dynamic point of view of the performances including panoramic shots of the whole ensemble from a bird’s-eye view to detailed, close-up shots of solo musicians on stage.

According to Heather Stengle, it was also important to the Orchestra to leverage a 12G system because of its compatibility to the Music Hall’s recently renovated infrastructure featuring fiber optic upgrades and new cabling.

“Panasonic’s UHS500 live production switcher is one of the only switchers that can handle 12G on the market. In addition to providing 4K format support, the switcher offers numerous HD inputs and outputs. That kind of usability ensures smooth operation and flexibility which is critical to our live streamed performances.”

The high quality 4K/HD PTZ camera and switcher system well positions the Orchestra for the future – including its near-term plans on adding limited capacity live audience performances while continuing its free digital concerts.

“Once we can have a live audience back, the energy in the room totally changes, and the musicians feed off of it. We’re very much looking forward to the cameras capturing some of that energy once the audiences return.” 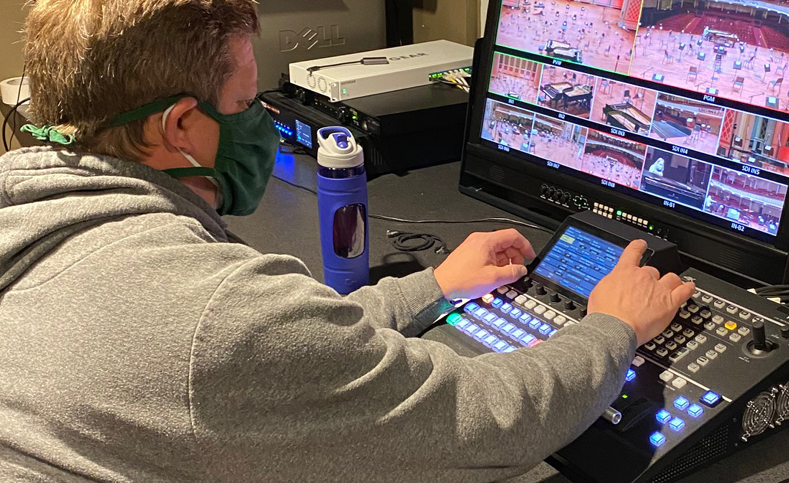 By integrating Panasonic’s PTZ camera systems, the Orchestra elevated its digital footprint with higher quality video production capabilities, enabling fans to enjoy visually and aurally vibrant programs from the comfort of their homes. The digital concerts have greatly expanded the Orchestra’s reach, with some performances receiving up to 200,000 views. As a result, the Orchestra has been performing for a global audience, delighting them with immersive musical experiences.

Ready to equip your concert space for live video productions? Reach out to a Panasonic livestream production expert to schedule a consultation!