Mapping the ecosystem of Smart Transportation

Mapping the ecosystem of Smart Transportation

Where corporate research, startups, academia and government are spurring developments in autonomous driving and smart infrastructure

In Colorado, near the Denver International Airport, two developments taking shape promise to give visitors a look at the future, this summer. Plans call for the arrival of EasyMile’s Driverless Shuttles at Panasonic’s Peña Station NEXT operations hub, home to the company’s CityNOW unit, which brings its global smart city expertise to North America. These electric shuttles have already been tried out in different weather and road types, from downtown Dubai to Austin, Texas.

Panasonic is also building a connected vehicle demo center at its Peña Station hub. The center comes out of a partnership between Panasonic and the Colorado Dept. of Transportation to create the first U.S. connected transportation program in which real-time data would be shared across vehicles, infrastructure and people to improve safety and mobility. Panasonic is serving as the design architect of the program’s integrated software platform, and evaluating next-gen tech from across the globe that could support the program.

Tech that reacts faster than humans

What’s particularly interesting is the way the overall effort can serve as a live test case in evaluating important technologies in the different phases of autonomous driving. Teams are now working to determine the best way to communicate information with drivers, and eventually directly to self-driving cars. Panasonic is leading the effort to deploy Dedicated Short-Range Communications, or DSRC, technology in Colorado. Think of it as an incredibly fast, highly secure Wi-Fi network for communication between vehicles and sensors installed along the road. Eventually, when a car several ahead of you suddenly brakes, your car will immediately brake with it to avoid a crash – DSRC-based technology can react faster than any human ever could, even if the incident is beyond the driver’s visual range. The first part of the effort is an initial technology footprint on Colorado’s I-70 Mountain Corridor. 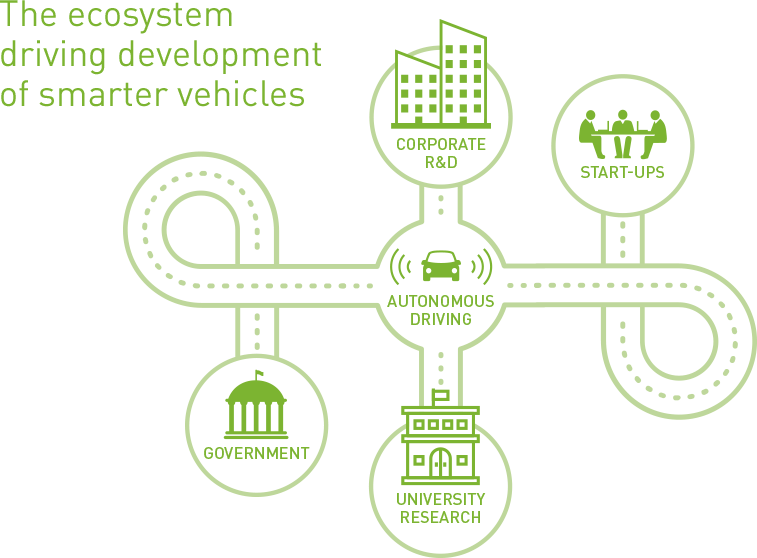 The speed of ADAS development

Researchers have been working on automated driving since at least the 1960s, and much of the technology needed to make smart roads and smart cars already exists—from infrastructure communication to multi-object detection using powerful sensors. In Japan, Panasonic has experience developing smart cities and connected transportation systems to help make roads and cars safer. Some of its latest thinking is put to the test at its ADAS driving test course in Yokohama opened to prove out emerging ideas in machine vision, radar, “surround sensors,” and other communication protocols.

Today smart infrastructure and autonomous driving are in the spotlight thanks to auto electrification, widespread connectivity and growing consumer interest. And Colorado and Yokohama are just two areas to watch. In Ann Arbor, Panasonic is part of a consortium of vehicle makers and suppliers using Mcity, part of University of Michigan’s Mobility Transformation Center. The Mcity test course and controlled environment opened to give industry and academic researchers a chance to experiment with technologies that could lead to mass-market driverless cars.

Meanwhile, 700 miles due south, the Harvard Business Review labels an eight-block area in Atlanta on the edge of Georgia Tech among the “leading destinations for corporate research centers.” At the Panasonic Automotive Innovation Center in Atlanta, Panasonic engineers are working with Georgia Tech researchers and local startups to discover and validate cutting edge technologies related to energy storage, heat management, air filtering, optics, deep learning and machine vision. These projects illustrate the ways smart transportation is all about a global ecosystem built from private sector R&D, startups, government and university research.

In addition, the company is on the lookout for acquisitions and partnerships that can help advance smart transportation and ADAS. In March, it announced plans to acquire a majority stake in a Tier 1 full service auto supplier that traces its roots to a workshop of innovation in Barcelona, Spain. Today Ficosa has leadership strengths in smart mirrors and wireless antennas and ranks among the largest holders of European patents for automotive technology. Earlier this year, Panasonic also invested in Drivemode, a U.S. developer of a hands-free app for drivers, and an ability to understand driver behavior on a global scale.

Peace of mind on match day: facial recognition solution at the football stadium

In the summer of 2019, Panasonic introduced a facial recognition system at a football stadium in Denmark to stop known troublemakers from entering,

Meet the women shaping the way we experience flight

See how a few of our high-flying women are changing the way thousands of passengers experience flight every day.

Setting Our Focus on Distracted Driving

Distracted driving is a pervasive issue, but drivers are slow to adapt to hands-free technology. Learn how Panasonic wants to simplify the connection process.

Harley-Davidson rides into the future with connected electric motorcycles

For the next generation of motorcycle enthusiasts, the ride will be more urban and connected.

Utah has a goal of reaching zero annual traffic fatalities in the state. Learn how intelligent transportation & connected vehicle technology are helping them get there.
Learn more
Connected World

The Changing Face of Police Services

Millennials and Gen Z officers in search of seamless technology

Where Industry 4.0 is remaking the factory floor

How technology is influencing the way consultants, architects and designers plan, design and build spaces

A new approach to community engagement in smart cities

The public and private sectors are working together to build SmartCOS