While mounting more than 20 of renowned international contemporary artist Rebecca Belmore’s most important works in Facing The Monumental, the curatorial team at the Art Gallery of Ontario was presented with one of the most interesting installation challenges they’d ever faced. In Belmore’s Fountain, they would need to rear project from an incredibly confined space onto a 16” wall of continuously flowing water.

On top of their usual concerns for how to best represent the original intent of an artist, the curators at the Art Gallery of Ontario (AGO) were faced with a singular challenge. While mounting Facing The Monumental, a retrospective of more than 20 multi-disciplinary works by renowned contemporary artist Rebecca Belmore, they needed to learn how to flawlessly project the work onto a backdrop of flowing water.

Panasonic’s PTRZ770 1-Chip DLP laser projector combined with the ET-DLE030 ultra-short throw lens was chosen as the perfect backbone to build the installation upon. Designed with the ability to function in up to 80% humidity, PTRZ770 was the perfect solution for projecting video onto water. The projectors’ high brightness and excellent image quality also played an instrumental role in creating this immersive experience.

Together, Panasonic’s laser projector and ultra-short-throw lens were able to flawlessly realize Belmore’s vision for the piece, while also standing up to the rigours of constant operation in the intensely humid installation environment. Both the curatorial team and Belmore herself were very pleased with the quality of projection achieved.

Rebecca Belmore is one of the most important contemporary artists working along the border of art and politics today. Rebecca Belmore: Facing the Monumental explores the artist’s lifelong commitment to exploring politics and beauty through art, often expressed using natural materials, and the human form. Made up of 28 of her most famous works, many never seen before in Toronto, ample room was provided for Belmore’s larger pieces to breathe and for the audience to be immersed in her large sculptures, installations and photography.

In a gallery setting, when it comes to the use of technology, balance is key. The AGO is highly cognizant of representing art in a truthful manner and getting it as close to what the artist intended as possible. At the same time, technology needs to be as noninvasive as possible. The curators at the AGO are tasked to make the presentation as true as possible while making sure that positioning of any technology disappears.

The necessary freedom of movement for the exhibition visitors added to the complexity. “Our audiences may view the work from many angles and places in the room. Because of this we are concerned with viewer interaction as well,” said Iain Hoadley, General Manager, Logistics & Art Services, AGO. “A visitor may be 20 feet away or one foot away from the projection surface. We strive to allow them to have a great experience from either location while not impinging on the projections themselves. The ability to have large scale projections that can also be viewed from a close distance without affecting the presentation becomes key.”

When it came time to mount Facing The Monumental, the AGO had to contend with these regular challenges as well as brand new complexities including projecting onto a waterfall.

The ability to have large scale projections that can also be viewed from a close distance without affecting the presentation becomes key.
Iain Hoadley General Manager Logistics & Art Services AGO

Fountain, Belmore’s entry to the 51st Venice Biennale — where she was the first female Indigenous artist to represent Canada — is one of her most iconic works, and one of the most difficult to install. A rear projection onto a 16” wide screen of falling water, not only did the projector used for Fountain need to be able to run flawlessly in a high level of humidity, but also project high quality video, all while achieving the correct image size in a confined space at a very short throw distance.

“After so much time in high humidity, when we dismantled the artwork, the projector was covered in calcified water. A white crust had built up along the exterior casing and we were worried that the fans and filters may have been affected,” said Patric Colosimo, Senior Media Technician, Logistics & Art Services. “After opening up that case we could find no such issues and with a good scrub the entire projector looked like brand new.”

The PT-RZ770’s maintenance-free design, allowing it to run for up to 20,000 hours, made it perfect for the exhibitions long hours; the AGO team had the security of knowing that the projector could run 24/7 if needed.

A projector is only as good as its lens. Working in such a narrow space was no problem for the Panasonic ET-DLE030 ultra short throw lens. With the world’s shortest throw, it’s the perfect solution for powerful projection even in extremely tight spaces. Using the ET-DLE030 the AGO team was able to shorten the project distance by up to 60% without sacrificing brightness.

For a second work, At Pelican Falls, the original intent was to suspend a projection next to a sculpture. After careful study, due to the placement of the piece within the gallery it was decided that the projection would be impossible to achieve. 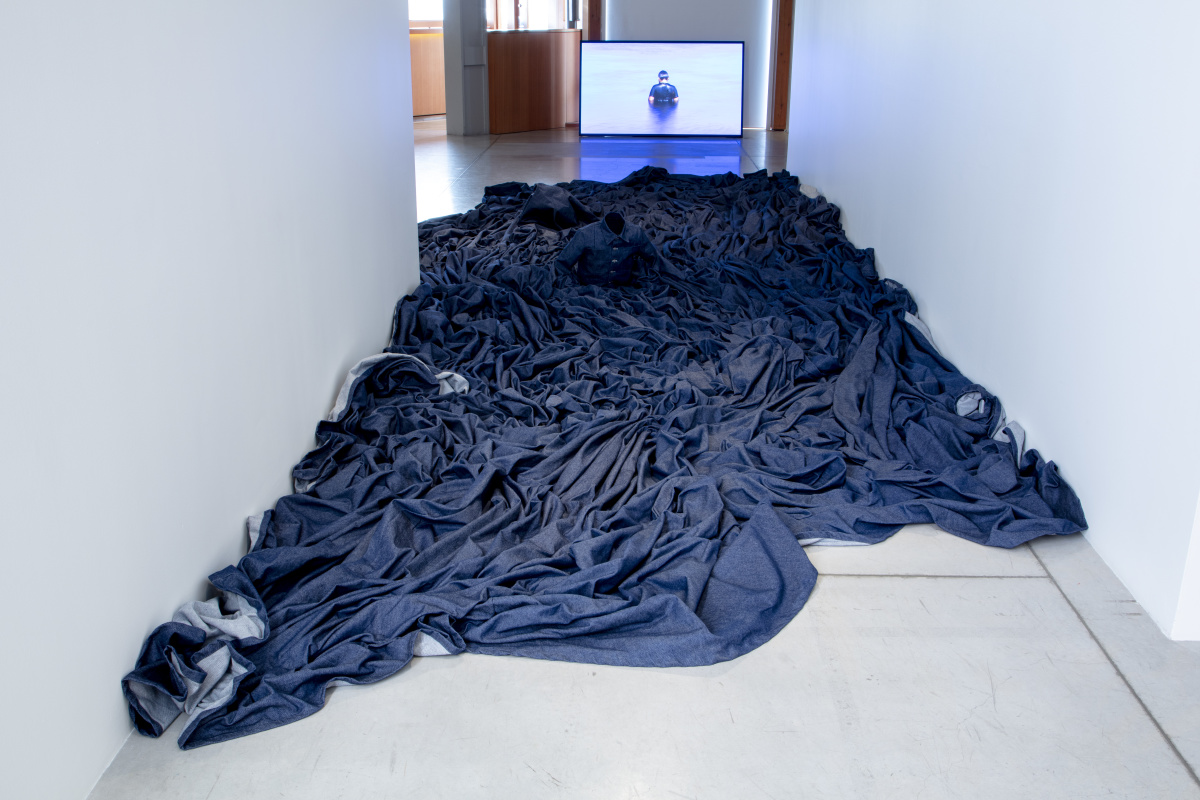 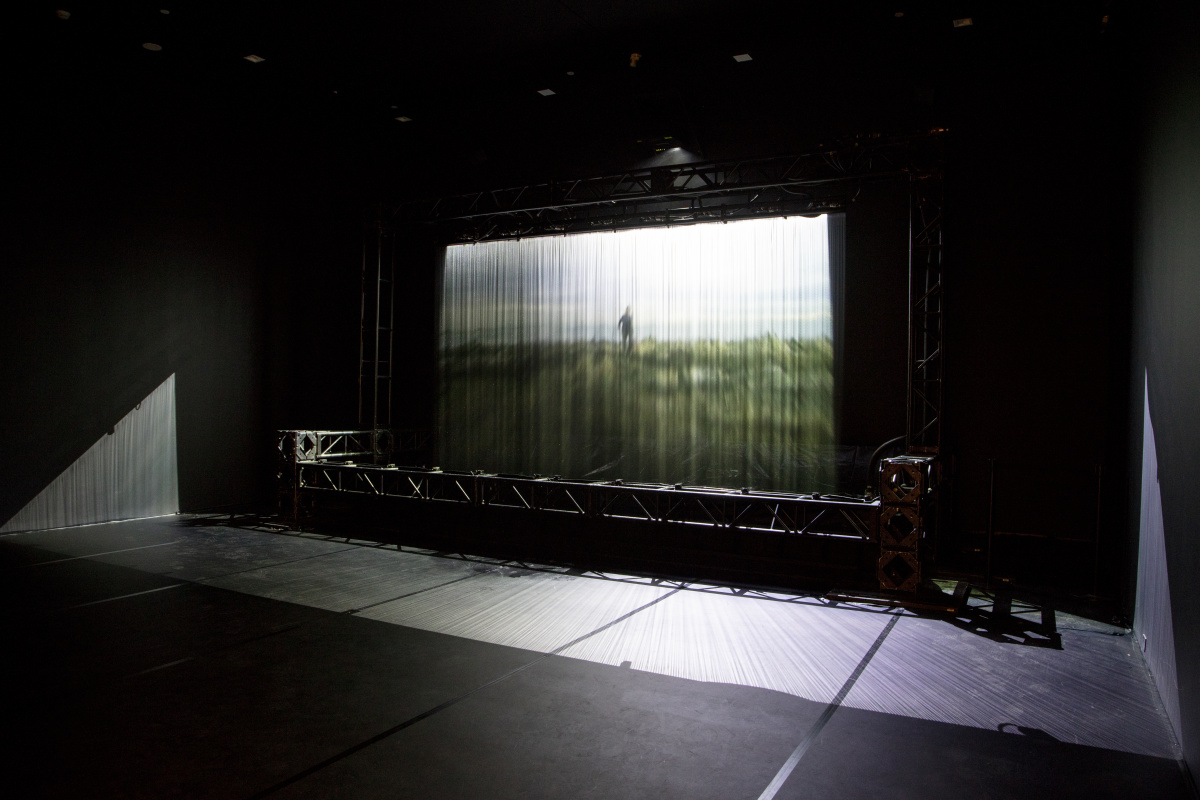 “I have never seen a lens that had such a short throw with minimal distortion and low lumen loss. The wide range of lensing that Panasonic delivers is a huge help in creating an effective installation and meeting the artists needs and desires.”

Working closely with the AGO curator and Belmore herself, the Panasonic team brainstormed to come up with a custom solution. They were able to match the projection size exactly with an appropriately sized, bezel-free, high resolution professional display. When floor-mounted with a slight angle it perfectly mimicked the size and placement of the original projected surface.

“The fact that the monitor was virtually bezel-less gave it the same look and feel as a projection,” said Wanda Nanibush, Curator, Indigenous Art, AGO. “Rebecca was very happy with how At Pelican Falls turned out and how our solution allowed us to have the flexibility to install the piece in a new orientation. The ability to mimic the look and feel of a projection surface was a huge advantage to us.”

Panasonic technology enabled the AGO to mount an exhibition of Belmore’s work that resonated deeply with audiences and was a shining example of how technology can be used to highlight, and not impede, the message and meaning of an artwork.